This is the sixteenth in this year's series of posts by students on the job market.

People respond to incentives, and so do politicians.  The way our elections are designed can drive the platform and policies of a candidate just as much as any other factor.  Through these platforms, politicians can tailor how and whether they appeal to different groups of voters.  “Inclusive institutions,” or institutions that encourage broad political participation, have often been singled out to be beneficial for long-term growth.  This suggests that we want elections to encourage elected representatives to represent the broadest group of voters, rather than a specific narrow group of voters.

One aspect of electoral design speaks to this directly: electoral rules define how what voters want is translated into political representation.  These formulas can create incentives for politicians to appeal to broader constituencies.  This can in turn have economic consequences, as politicians then provide public goods supported by a broader constituency once in office.

In my job market paper, I study how one difference in electoral rules – namely, if elections feature a single or two round – can lead to different economic outcomes.  I look at how this difference affects the extent to which elected representatives appeal to a broader constituency and how this, in turn, affects the overall level and distribution of public goods.   Differences in electoral rules are hard to study, as these rules often are chosen with political or economic motivations in mind or are implemented in conjunction with other reforms in a country.  To obtain causal identification, I use a regression discontinuity design to exploit random sub-national variation of electoral rules in the context of Brazil.

My regression discontinuity design takes advantage of a unique policy in Brazil that assigns a municipality's electoral rule based on a threshold of 200,000 registered voters.  Municipalities below this threshold elect their mayor in a single-round election, and municipalities above this threshold elect their mayor in a two-round election.  To causally identify the effect of the electoral rule, I compare municipalities close to but on different sides of the threshold.  Brazil is an ideal context for this study.  One, no other policies are implemented at or near 200,000 registered voters.  Two, voter registration in Brazil is mandatory and handled by state electoral authorities, making it difficult for mayors to try to manipulate to be above or below this threshold.

In a single-round system, voters vote once and the candidate with the most votes wins.  In a two-round system, voters first vote and if no candidate receives a majority, they vote a second time between the top two candidates.  This distinction means that to win in a two-round system, candidates not only have to obtain the most votes but must obtain at least 50%.  The theoretical intuition is that this results in making every vote more valuable and making it more costly for candidates to ignore certain groups of voters.  In order to win, candidates must adopt strategies to appeal to broader groups of voters.  As the time between rounds is often short (in Brazil, it is three weeks), these strategies are adopted even in the first round.

I first ask whether two-round elections affect political representation.  Using vote counts from the first-round election at each polling station in Brazil, I measure candidates’ geographic representation: what areas of the municipality candidates represent.  I do this in two ways: (i) indices of voter concentration to quantify the overall level at which voters are geographically concentrated, and (ii) the standard deviation of candidates' vote shares to quantify a candidate-level measure of geographic concentration.  In two-round municipalities, voters are less geographically concentrated, corresponding to a reduction that is 27.4-45.6% of the average concentration in single-round municipalities.  The decrease in concentration only occurs among the top two candidates, indicating that the electoral rule mainly affects the candidates with a chance of winning. 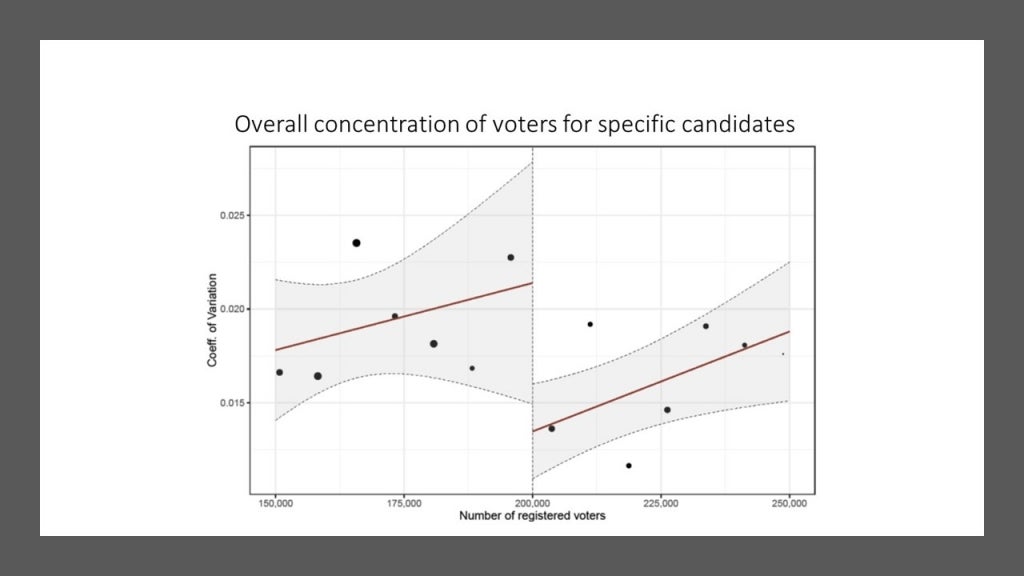 These results suggest that two-round elections lead to greater inclusiveness: elected candidates represent a geographically broader constituency.  In turn, I find inclusiveness along another dimension: voters are more engaged in the political process.  While turnout is unaffected, as turning out to vote is mandatory in Brazil, I find differences along one margin on which voters can engage in the political process: the number of blank and invalid ballots is significantly lower in two-round elections.

If politicians in two-round elections are winning geographically broader constituencies by offering broader policy platforms, once in office, mayors may implement these policies and provide public goods differently.  I test this hypothesis by looking at the provision of a local public good that can be geographically targeted and for which municipal mayors have large control over: municipal education.  To quantify provision, I measure the level of resources present in public schools in the municipality.  I find that (i) public schools in two-round municipalities measure 0.057-0.081 percentiles higher in the national distribution of resources, and (ii) the standard deviation of resources across schools is lower.   This second result suggests that resources are being distributed more equitably across schools in the municipality.  I find that the lower inequality is being driven by additional resources going to the poorest schools in the municipality.

These results lead to a natural question: do these differences in public goods provision translate into real outcomes, or are politicians pandering to additional groups of voters in inconsequential ways?  To answer this, I estimate the effect on downstream educational indicators.  I find that two-round municipalities experience improved education outcomes: drop-out rates are lower and literacy rates higher among cohorts who were of school-age during the electoral term.  These results suggest that candidates are providing public goods in ways that generate tangible benefits to the municipality.

I provide evidence that the effects I find are driven by different strategic behaviors candidates adopt during the campaign, rather than differential selection of candidates.  Both candidates and winners in two-round elections are not observably different in terms of demographic characteristics, place of birth, educational attainment, or previous occupation.  Two-round elections do cause differential entry along political affiliation: more candidates are represented by smaller parties and have run in previous elections.  However, these candidates are not more likely to win the election.  As a result, different outcomes in two-round municipalities cannot be explained by the political identity of the eventual mayor.

Implications of this study

My results imply that if we want to make political institutions more inclusive, electoral design is one important component.  Electoral rules can have important political and economic impacts because they generate incentives for politicians to appeal to broader groups of voters.  Short of transforming the political system, policy tools that make it more difficult for politicians to win with narrow groups of voters – such as ones that reduce personality politics or limit the number of candidates in single-round elections – can generate meaningful steps towards making the political process more inclusive.

Moya Chin is a PhD student in Economics at Harvard University.