Some Unexpected Effects of Microcredit on Children: Guest Post by Pedro Aratanha

This is the fourth paper in our series from graduates on the job market this year.

Oftentimes, microloans are tied to the requirement that the borrower be engaged in an income-generating activity. Moreover, even though it is still inconclusive whether poor self-employed entrepreneurs and small businesses become more profitable because of microcredit, it seems to be the case that they are more likely to expand or initiate entrepreneurial activities (see, for instance, Banerjee et al. 2013, and recent guest post by Nathan Fiala).

If, as result of microcredit, borrowers are more involved with their businesses, will they then devote less time to their families? And if so, how could it impact their children? I argue that, by making credit available to poor entrepreneurs, microlending has the potential to increase the borrower's opportunity cost of participating in other activities, including household activities and parental involvement. More specifically, my job market paper provides evidence that the introduction of microlending changes the allocation of children’s time within the household, and negatively affects their performance at school, measured by test scores.

The CrediAmigo Program
I study the second largest microlender in Latin America – with over one million clients by the end of 2011 – and empirically analyze its expansion over the years and across Brazilian municipalities. The CrediAmigo program was established in 1998 by Banco do Nordeste development bank for the Northeast region of Brazil, with the initial support of the World Bank. The program targets low-income urban entrepreneurs operating a variety of businesses, mostly in the service and retail sectors. In order to qualify for the loan, the borrower must be running a business, or show evidence that she is about to start a new one. The average duration of a loan is three months, and its median size, approximately, R$1,000 (US$500), which corresponds to twice as much as the median monthly income in the Northeast region. Interest rates are relatively low, and range between 8 and 20 percent a year, in contrast to the national average market rates for non-financial corporations of around 24 percent, and 41 percent for households.

Data Sources and Identification Strategy
The main empirical analysis combines two distinct data sources: (i) private, administrative data from CrediAmigo program that singles out the municipalities in which the microlender operates, and (ii) a dataset based on a national standardized examination conducted every two years by the Brazilian central government. All 5th and 9th graders enrolled in public schools are evaluated in math and Portuguese. Following the exams, they also need to answer a comprehensive socioeconomic questionnaire, including questions about parental involvement, and the allocation of their time on a typical school day.
Another questionnaire is answered by the principal and contains detailed data not only about her professional experience, but also about the school.

The major challenge to the identification of CrediAmigo's impact is that the program expansion was not random across municipalities. Thus, simple comparisons between the outcomes of those students who live and do not live in areas with CrediAmigo confound program impacts with differences in the underlying characteristics of participant and non-participant municipalities. Hence, in order to identify the causal effects, my empirical strategy relies on a unique feature of the program, namely, that it is not allowed to expand beyond certain boundaries. Banco do Nordeste has a mandate that constrains its lending activities to a certain geographic region of the country. The discontinuity of the program at the boundaries of this region provides a seemingly exogenous variation of access to microcredit. My empirical strategy, then, restricts attention to the border region, as shown in the figure, and relies on the comparison of students living on one side of the border, where the microlender is allowed to operate, to students on the other. More specifically, the main econometric analysis compares changes within the school and over the years on one side, to changes on the other side. 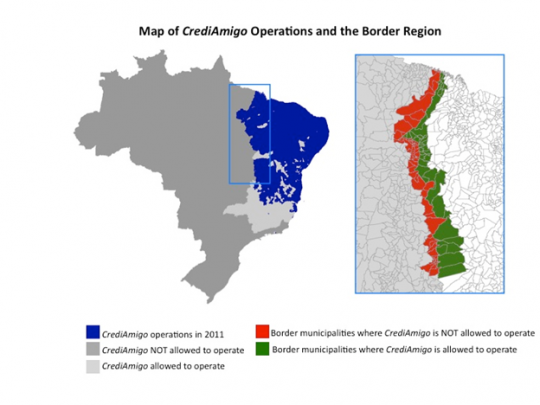 The Unintended Consequences of CrediAmigo on Children
The first set of results addresses the hypothesis that the availability of credit, and the resulting possibility of a parent expanding her business, or even setting up a new one, would impact the child's performance at school. One major concern among economists and policy-makers has typically been that microcredit increases the chances of a teenager dropping out of school to help with the enterprise. I find that not to be entirely the case. Children, on average, are not more likely to drop out, nor do they increase labor supply outside home. However, because of the introduction of CrediAmigo:

So what could be going on? The second set of results suggests the possible mechanism that takes place within the household once microcredit is introduced. In addition to market work – on which I find no impact – I look at three different alternative uses of child time: homework, television watching and household chores. I also analyze two measures of parental involvement in children’s education: attendance at parent-teacher meetings, and encouragement to attend school and to not skip classes. This information is obtained from the questionnaire that students fill out after they take the exams (notice that students might have incentives to not tell the truth, which is not so problematic if we think that these incentives don’t differ across the border). Again, the impact of the program varies across grades. As a result of access to credit:

In sum, these findings are consistent with a reallocation of parental time away from household activities: helping the younger child less with school and getting the older one to participate more in domestic chores. As highlighted by Edmonds 2007, in most contexts, a working child’s primary economic contribution comes through the help offered to their family, by providing domestic services that free up adult time – which seems to be the case for 9th graders. The findings for 5th graders are in line with studies that relate parental involvement to children’s educational outcomes, like the one recently cited on this blog, by Avvisati et al. 2013, and a meta-analysis by Patall et al. 2008 that finds that parents trained to be involved in their child’s homework results in higher rates of homework completion, and possibly, improved academic performance.