Weekly links January 10: stop the multiple rounds of refereeing, continue working at 95, regression to the mean and health spending efforts, and more…

·       Does economics have too much refereeing? A new NBER working paper by Hadavand, Hamermesh and Wilson looks at the experience of Economic Inquiry, which, beginning in 2007, offers authors the option of submitting under a “no revisions” policy in which papers get a simple yes/no decision, or the regular process, which can be subject to multiple rounds of refereeing. Comparing the 160 papers accepted through the no revisions route to those 669 which go through the regular process, they find that the fast track papers receive more citations (0.6 more citations on a mean of 1.3 – these are Web of Science citations and are only a few years after publication, so are very low on average). This continues to be true controlling for observable features of the papers and authors (including their seniority and prior citation record), with the coefficient dropping a bit in magnitude to 0.4. They also find that papers that go through multiple rounds of refereeing have no more scholarly impact than those which go through only one round. Of course in both cases it is hard to fully deal with selection, but the paper at least makes an effort to control for a set of key observables. The paper also has this figure of time from submission to publication at five econ journals, showing a long tail (the median is 2.25 years, 90th percentile over 4 years!). 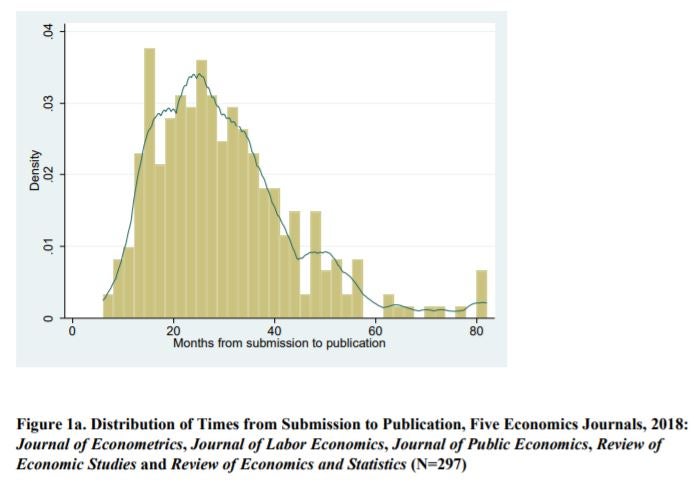 ·       MIT Technology Review of Robert Solow – still interested in research and advising a report on the Future of Work at age 95! And on how he made sure his teaching didn’t get stale “Every year, Solow would rip up his undergraduate lecture outlines, force himself to rethink his course material, and write new lectures, which he often delivered without notes.”

·       Andrew Gelman is not convinced by the study finding big impacts on test scores of installing air filters in LA “If there’s a problem, it’s with the general attitude in much of economics, in which it is assumed that identification strategy + statistical significance = discovery. That’s a mistake, and it’s something we have to keep talking about.”

·       At VoxDev, Shelby Grossman uses a survey of traders in Lagos to examine why some market associations govern well, while others appear to extort traders in their markets.

·       In the U.S.. 1% of patients account for almost 25% of all U.S. health care spending. Amy Finkelstein notes in Statsnews that a spate of high-profile studies have reported dramatic reductions in health care spending from programs designed to keep these super-utilizers out of the hospital through various means, such as coordinating their outpatient care and coaching them on managing their conditions and medications. In a recent RCT, she and her co-authors tested this. They found that the intervention was indeed followed by the treatment group being much less likely to visit the hospital in the six months after the program than they had in the period before the program – but that this was also true of the control group, so there was an overall null effect. She uses this to illustrate the dangers of regression to the mean in thinking about whether programs worked without having a proper control group. Austin Frakt offers a nice summary of the paper and discussion of alternative policies on the NY Times upshot.

·       Call for Papers: The World Bank’s Annual Bank Conference on Development Economics (ABCDE) will be on Global Unrest this year. They are looking for papers which  examine the drivers of this global dissatisfaction, its similarities and differences with previous episodes of widespread civic unrest, whether and how such discontent can be addressed, and whether there may be common threads connecting these developments. Submissions due March 16.