How can the mobile revolution lift up Tanzania’s poor? 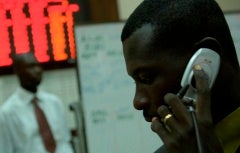 Let's think together: Every week the World Bank team in Tanzania wants to stimulate your thinking by sharing data from recent official surveys in Tanzania and ask you a couple of questions. This post is also published in the Tanzanian Newspaper The Citizen every Sunday.

Sub-Saharan Africa has experienced a boom in mobile phone users over the past decade. The total number of cell phone subscriptions on the continent increased from just over 11 million in 2000 to 463 million in 2011 and is expected to grow even further. This technology not only affects day-to-day life and communication, but has the potential to boost economic development directly and indirectly.

In creating jobs, for instance, mobile phone technology has contributed towards the reduction of poverty. But more important are its indirect effects on the economy such as the increased connectivity of firms and micro-enterprises which increases their access to information and facilitates the movement of money through mobile transfers. This contributes to increased productivity and encourages diversification into new activities which are all good for an economy.

The following statistics document that Tanzania has seen an impressive increase in mobile phone use over the last few years:

What is even more encouraging is that mobile phones are no longer confined to urban areas, but have helped remote or forgotten rural areas by providing them with virtual connectivity. Yet more still needs to be done to reduce inequality, for instance by reducing cost especially for the poorest:

- In 2010 more than one third of rural households owned a cell phone, up from a mere 17 percent in 2007.
- This brought first-time connectivity to more than 5 million individuals including at least 2 million poor.
- Yet in 2010 only 3 percent of the poorest quintile owned a phone compared to 96 percent in the richest quintile.
- Indeed, for a poor family, getting a mobile phone involves financial sacrifices. Handsets are expensive and airtime and transaction cost are about 10-15 percent higher in Tanzania than in Kenya, even if they are lower than in Uganda. In fact, in 2010-11, average household spending on communication was higher than on health care.

The good news is that with about half of subscribers using their phone to send or receive money, Tanzanians have been among the fastest users of mobile money services in the world, just behind Kenya. In agriculture, a growing number of agricultural information service providers offer technical advice and market information to farmers through bulk sms, call centers or specialized apps. In the health sector, mobile phones have opened up opportunities for remote diagnosis so that health workers in remote facilities are supported to treat their patients by medical experts further away via telephone. This can potentially improve service delivery in light of the understaffing in rural health centers.

While this virtual connectivity opens new possibilities, it will need to be accompanied by further policy efforts since access to information or money by themselves are not enough to transform lives. Farmers cannot easily exploit price differences between markets if rural roads are in poor condition and transportation costs remain prohibitive. Whether the poor can take advantage of mobile phone based services also depends on the education system, which needs to provide students with adequate literacy and life skills. Even remote diagnosis can only succeed in improving rural health outcomes if primary facilities are stocked with essential drugs and medical equipment, and if patients have access to referral facilities for cases that require higher-level care or face-to-face medical consultations.

- Do you believe that access to mobile phones is changing or will change the lives of Tanzanians, including the poorest?
- Are mobile phones reducing or exacerbating inequality in Tanzania?
- How can mobile phones best help Tanzanians to work more productively? Through information exchanges? Money transfers?
- How can the mobile revolution be harnessed to improve service delivery in education, health or water supply?
- Should the Government subsidize poor households to access mobile phones or rather help them get better education and health?

Note: The statistics above are based on the World Development Indicators (WDI), 2007 and 2010 Demographic and Health Surveys (DHS), and the 2010-2011 National Panel Survey. These sources are publicly available. As far as my experience with the so-called poor Tanzanians (People that lives in deeply remote areas) is concerned, I don't see any relevance of Revolution of mobile phones and the improvement of these people's lives in any aspects. Most people in those regions have no idea of the importance of education because people who are responsible to educate them and make them understand the very basic of education are nowhere to be found; how could you tell me that your SMS from a mobile phone would enlighten them? How would they understand e-applications when they lack even basics of this new era of living? Instead of using offered applications constructively, most people in Africa (and I think applies in the rest of the World) take advantage of having mobile phones to ease fornication. We should let go of our ego and deal with facts. It's only fact that will solve the real problems of these people otherwise we'll be denying them of the future they deserve.

Your statistics are devastating for the very poor.
Please show us the results of the remaining 3 quintiles for better judgment.
Regards,
Fritz Walchli

Are donors becoming sales persons for astute lobbies?
Most small food farmers and other food producers can grow healthy and affordable food with the relevant knowledege and skills which can be easily acquired from qualified aeters and not from expensive communication toys.
Jacques Fremy.
1818 Alumni.

I think the possibility to pay through mobile phone will boost the trade at for example rural markets. The possibility for young entrepreneurs will increase and rural business could grow. In the longer perspective distance trade will occur. Payment for sending goods from rural areas to urban areas or even abroad would be a possibility.

Interesting but I'm most interested in how mobile technologies can affect and improve education and educational outcomes....

I do believe that mobile phone has a tremendous positive effect on rural poor people.In Bangladesh there are 90 million Mobile phone users ( population 150 million). Almost every rural household has an access to a mobile connection. Last one decade the economic activities of rural Bangladesh has been changed rapidly. Women are the main beneficiary of these activities. Small business are easier because of connectivity. Now rural boys & girls can apply for admission in higher education institution through mobile. Earlier they had to go to big cities personally to collect forms and depositing that. Now all result of public examination can obtain through mobile phone. The data base of public examination are now shared by the universities and admission seekers do not need to submit the hard copy of transcript prior confirmation of admission .

80 million of Bangladeshi people are working in other countries. They send 12-14 billion US$ every year. Maximum of these wage earners are from rural areas. Now they can easily remit their money to the family through mobile texts. The female member of the families are now directly collect the money through mobile phone . In this way rural women are now have their role in family spending decesions.

Hello, you can take the Wazazi Nipendeni Free informative SMS service as an example of how the government is using the networks to reach even the most remote citizens. This Free service supports the Wazazi Nipendeni multi media campaign. The campaign is led by the Ministry of Health and Social Welfare in conjunction with a number of international, national organisations and private sector partners. It offers free information to ensure a healthy pregnancy and good early child care to pregnant women, mothers with a newborn baby as well as their supporters. Within 3 days of the launch on 20 November 2012 over 10,000 mobile users subscribed to the service! Also the success of the family planning Smsm service MR4H shows clearly that mobile subscribers in Tanzania accept the mobile phone as a means to receive information that can increase their quality of life.

Take the recently launched Wazazi Nipendeni Free informative SMS service
as an example of how the government is using the networks to reach
even the most remote citizens. This Free service supports the Wazazi
Nipendeni multi media campaign. The campaign is led by the Ministry of
Health and Social Welfare in conjunction with a number of
international, national organisations and private sector partners. It offers free information to ensure a healthy pregnancy and good early
child care to pregnant women, mothers with a newborn baby as well as
their supporters. Within 3 days of the launch on 20 November 2012 over
10,000 mobile users registered to the service by sending the word 'mtoto' to the 15001 short code! Also the success of the
family planning Smsm service MR4H shows clearly that mobile
subscribers in Tanzania accept the mobile phone as a means to receive
information that can increase their quality of life.

Its well known that Communication is Power,
Saying mobiles phone can transform lives is just a cheap minds.Who is poor by the way?Are you referring to somebody who does not have food,clothes,illiterate,living below $1/day? From experience a poor people in Tanzania is the one who is lacking everything to keep human being prosper.Therefore in order this communication revolution benefits the poor people,we must analyses the priorities of transforming people from poverty.People of Tanzania are lacking of food,Clean water,Poor infrastructure including roads.Well giving those poor a phone to access market for the products which he/she doesn't have would mean less.First priorities should focus on means to creating wealth first then the other transformation will follow. To my poor knowledge,I see we Tanzania and other African state we are tackling poverty at secondary level instead of primary level. We should change.

I think its consume more of their time thinking about communicating with the relatives instead of doing productive jobs, i think the Government should invest on industries which may increase employment to the citizens and also subsidizing mobile phones is the a very big mistake I could advise they improve agricultural sector so that the country become food secure instead of mobile phones

African are doing well for recent years, I appreciate them