How price controls can lead to higher prices 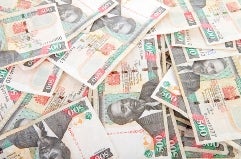 The Kenyan parliament just passed a new finance bill and there is one important good news: interest rates will not be capped. Prior to this, there was a risk that Kenya would embrace unconventional economic policies, and there were heated debates regarding price controls over the last months.

Many policy makers and Kenyans think that interest rates ought to be capped at a certain level, especially following their sharp rise since the end of 2011. People are affected by high prices, and inflation has only started to come down over the last few months. Borrowers want cheaper loans.

The Kenyan debate around price controls reminded me of Germany in the 1980s, as I was growing up.  At that time, my country was still split in two. While West Germany followed a “social market economy”, East Germany opted for a state-led model in line with Soviet and communist philosophies.

One core economic policy of the East was price controls on all possible goods. Food, rent and services all had fixed prices. Also, the currency was set at parity with West Germany’s “Deutsche Mark”. But this exchange rate was unrealistic; given West Germany’s economic success, and East Germany’s relative stagnation.

In May 1989, I went on a high school trip to the East—a special treat at that time, because access there was limited and highly regulated. My friends and I were approached by black market traders offering a ratio of 5:1. You probably remember what happened in the six months following my trip: The Eastern Block collapsed, and the Berlin Wall came down.

When travelling through Africa in the 1990s, I had many similar experiences: many goods in the shops were scarce, and black markets were vibrant.

Economists may not know a lot but, as Nobel Prize winner Milton Friedman put it: “we do know how to create a shortage”. Price ceilings are the easiest way to create one. Evidence around the world demonstrates that attempts to control prices, in fact often leads to higher prices (in a parallel market). And usually, the hardest hit are the poor!

Capping interest rates could have resulted in similar unintended outcomes. Any interest rate ceiling means that credit has to be rationed. In that case, there is no guarantee that the most productive investment receives the credit.

Often, credit is rationed on political grounds, which undermines investment productivity. Worse still, the banks which give-out these politically-charged loans, often don't get repaid, putting their balance sheet in jeopardy.

So how can price rises be avoided and poor families protected from price rises? Aren’t bank charging disproportionate fees and benefitting from high interest rates, at the expense of the common man?

The frustration vis-à-vis some banks is understandable. They seem to be making large profits in times when others are having a hard time to make ends meet. I also never understood why I needed to pay a large sum of money each month, just to have my bank manage my money in most countries, you add to your savings each month because banks pay interest on your deposits. However, most Kenyans seem to be losing out continuously, as many banks charge higher fees than they give their clients in interest.

Many global companies consider Nairobi their hub and entry-point for Africa, not least because of Kenya’s strong services, including in banking. Over the last few weeks, the main area of contention has been the “interest rate spread” which is the difference between the interest the bank charges you for a loan (“lending rate”); and the money they give you for keeping your money with them (“savings rate”). For about a year, Kenya’s spread has been above ten percentage points, and with higher overall interest rates, it can become very expensive to borrow. However, the “spread” is not equivalent to the bank’s profits. A large share of the banks’ income is actually spent on operational costs, which are higher for banks which are present in rural and remote regions (see figure).

Figure: About a third of Kenya’s interest rate spread is profit 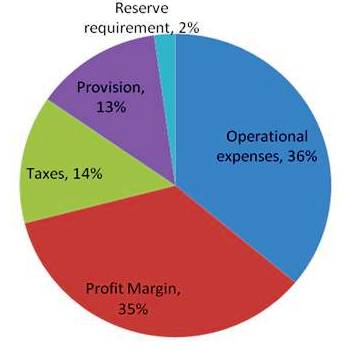 What can Kenya do to reduce interest rates and keep the financial sector strong?

First, try to bring down inflation further. Food remains the key driver of inflation, and better food policies would help everyone. Consider this: Kenya’s inflation is about 2 percentage points higher, because last year, Kenyans paid almost double for maize, and triple for sugar; than they should. This is not just bad for poor consumers but also for the macro-economy. With lower inflation, interest rates could also come down.

Second, Kenya still has a strong reputation for sound macroeconomic policies, and a strong financial sector. This is a lifeline to the economy. But you still need strong institutions which make sure that there is an equal playing field for firms to compete.

A key concern is the slow implementation of regulations to address the flow of illicit funds. Progress in Anti-Money-Laundering may have not gotten the needed attention. If Kenya continues to make only limited progress, it risks weakening the reputation of its financial system, thus prompting enhanced scrutiny on all financial transactions, and increasing their costs in the country.

Third, competition and innovation are the best medicine against high prices. The telecoms sector has demonstrated that prices can come down dramatically, if well-regulated competition unfolds. More transparency of banks’ financial products, and increased consumer protection, would lead to more competition, and better services for everyone.

If the banking sector would follow the model of Telecoms—and there is already a lot of overlap due to mobile money—Kenya could get the best of both worlds: A stable financial system and cheaper loans!

Note: This contribution follows on John Zutt’s (World Bank Kenya Country Director) commentary on interest rate controls in March 2012, and builds on the work by the World Bank’s financial sector and economic teams. One important lesson we learnt from the high inflation and a weaker exchange rate in the fourth quarter of 2011 is that crisis can galvanize collective action to address challenges. I recall being summoned left-right-centre to discuss possible solution out of the crisis. The office of the Prime Minister took a leading role and soon Parliament came in. The IMF was also in the loop. After some diagnostics we discovered, wallah! credit to the private sector was growing phenomenally fast (reaching 36% in Nove2011), the CA deficit was widening largely fueled by strong credit to private sector; the shilling was weakening, loosing almost a third of its value in just two months due to excess demand for dollar to finance imports.

We were unanimous, the solution is to tighten monetary policy and explore ways for gradual fiscal adjustment. With a tight monetary policy the cost of borrowing went up, as economist would expect. Although according to Akerlof’s story of lemons and cherry, lemons would still have appetite for credit even at high rates.

Then, the lemons started to complain bitterly of high interest rates and found solace in the Finance Bill to cap interest rates. If I may summarise, what the lemons wanted was low inflation, stable and firm shilling and low interest rate. Economists, aware of the impossible trinity, smelt disaster. Unlike the lemons, economists know that one of the most powerful natural laws is the law of unintended consequences. The proposed capping of interest rates was detrimental to the future of the Kenyan economy. Some of the unintended consequences have been tackled in Mr. Fengler’s Article i.e. non-transparent credit rationing and mostly to the lemons; since Kenya has an open capital account, credit would flee to other regions where favourable returns is possible ( especially now that at least six multinational banks control the biggest credit share in Kenya). Ultimately the shortage in credit would hurt the very poor that the lemons wanted to protect.

But is there scope for low interest spreads in Kenya? In my own assessment, it is possible. First, the operations costs remain high at 35% of total income. Banks could co-operate to share infrastructure and lower this operational costs. There is scope for consolidation either market or legal driven by way of increasing the paid up capital. A country like Nigeria, with 200 million people has only 25 commercial banks after a mandatory consolidation effort. There is no need to have many small commercial banks (43 currently) which cannot take advantages of economies of scale to lower their operation costs. It is better to consolidate or merge to increase co-capital for better leveraging. In fact, the new Basel III capital standards require banks world over to have thicker buffers of capital to absorb losses. This means, Kenyan commercial banks must triple their current co-capital levels.

Second, regular publication of interest rates and all other charges for all commercial banks will cure us of information asymmetry on available cheaper credit. Kenya Bankers Association could work with CBK to ensure wide publicity of such rates. This will enhance transparency in pricing of financial services.

Finally, the ongoing reforms to address the difficult environment for doing business, such as digitalization of the land registry thus making it easier to validate land title collateral; agency banking and introduction of more currency centers must be reflected on the reduction of operation costs and lower rates. So the bottom line, the interest spreads are high, banks can do more to lower the spreads.

Inflation remains indeed one Kenya's most critical economic issues for this year, even though it again came down slightly as announced today by KNBS. Here is an earlier blog post discussing the impact of inflation on the economy and the poor:
http://blogs.worldbank.org/africacan/taxing-the-poor-through-inflation

Also, please stay tuned when we launch our next Kenya Economic Update which is due in the next three weeks.

I like the article. Previously I had this idea the control of interest rates was good for us. I'm still not entirely convinced why we should not adopt this with our insensitive bankers. They peg the rates strongly on a bank which is the lender of the last resort, I thought they have other credit avenues before they approach the bank!
What you've not captured is the need to lower costs of production as a way to tackle inflation. These costs are way too high with the cost of energy fueling this.
Value addition of our agricultural output would also help, too bad this is not possible with high costs of inputs, power, fuel, capital (from banks)... name them, our processed output end up being highly priced. We just need sober leaders. Leaders who are not corrupt. Leaders who are transparent and accountable. Leaders who have the welfare of the nation at heart. I say this because the political system has failed us totally!