Is Rwanda Set to Reap the Demographic Dividend?

From almost every point of view, Rwanda’s performance over the past decade has been an unambiguous success story.

Between 2001 and 2011, Rwanda’s economy grew by 8.2 percent per annum, earning the country a spot on the list of the ten fastest growing countries in the world. Poverty rates fell by 14 percentage points, effectively lifting more than one million Rwandans out of poverty. Social indicators followed the general trend: Net enrolment in primary school increased to almost 100 percent, completion rates tripled, and child mortality decreased more than threefold, hitting the mark oftwo-thirds reduction as targeted by the Millennium Development Goals.

Yet buried under all this good news lays another maybe even more important evolution.  After a decade-and-a-half stall, total fertility rates in Rwanda dropped from 6.1 in 2005 to 4.6 in 2010. This means that during a period of five years, the average number of children a woman of childbearing age can expect to have, has declined by 1.5.

This is a huge drop, and an unprecedented one in the history of the Demographic and Health Surveys. This trend is being confirmed by other surveys: The child dependency ratio, which stood at 1 in the 2001 LSMS, dropped to 0.9 in 2011. Similarly, the 2012 census put Rwanda’s population at 10.5 million, half of million lower than initially projected.

So what does this all mean? It means that after a stall of 15 years, Rwanda’s demographic transition seems well on its way. That is good news: During any demographic transition there is a particular moment -the “Goldilocks” moment- where there is an exceptional bulge of working-age adults. Because fertility is falling there are relatively few children. And since life expectancy is still relatively low, there are few elders to take care of. The result is a bulge in working-age adults and a dramatic decline in the dependency ratio, what is called the “demographic dividend”.

To illustrate its potential, research shows the demographic dividend and explains up to one-third of the extraordinary growth many East Asian countries experienced between 1965 and the 1990s (the “East-Asian Miracle”).

The bulge in working-age adults in Rwanda is approaching (see graph):  Working-age population is set to grow by  2 million in 2022, hence increasing  its share in total population to almost 60 percent (up from 55 percent now). And the transition is projected to accelerate after 2025, when working age population will grow much faster than both the youth (younger than 15-years of age) and the elderly. 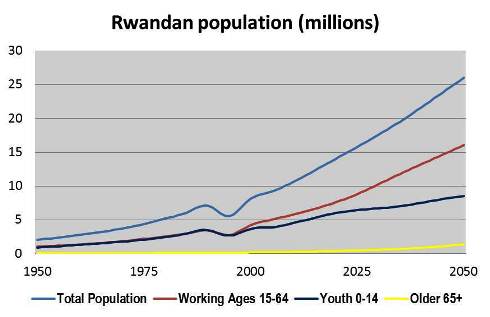 This provides a unique opportunity to Rwanda’s development: Providing this large, young and energetic workforce with productive employment will boost output and put the country on a path to long-term development.

However, It also provides a unique threat: Failing to do so will not only mean foregoing this unique window of opportunity, but also the risk of social upheaval due to a growing mass of unemployed young adults. The demographic dividend is not a given. But if it is well prepared for, and the right policies are in place, it may positively transform Rwanda in the decades to come. Mark Sommers' work on youth casts some doubt on the picture of Rwanda as an 'unambiguous success', including on official statistics about social progress such as on numbers who are HIV+, and may also be useful for understanding the real challenges of taking advantage of this apparent window of opportunity. http://www.amazon.co.uk/Stuck-Struggle-Adulthood-Security-International…