Is this a woman's world? Gender equality in Tanzania 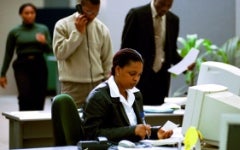 Let's think together:Every week the World Bank team in Tanzania wants to stimulate an evidence-based debate by sharing data from recent official surveys and ask you a few questions. These posts are also published in the Tanzanian newspaper The Citizen every Sunday.

Tanzanian families have been doing things differently of late. More of them have been sending their daughters to primary school and more women have become heads of families with increasing financial responsibilities. Increasingly too, more women are involved in the political arena today.  These trends can also be found in most countries in the world but they are especially visible in Tanzania as reflected by the following statistics.

This is good news because women's empowerment is beneficial for a country's quest for prosperity. Indeed, when women have a say in household and political decisions, have better access to education, and have access to better earning opportunities this generally results in healthier and better educated children.Yet, many Tanzanian women still suffer from discrimination and its effects compared to men:

The fate of women in Tanzania raises some questions: Before deciding on what to invest for more gender equity, the gouvernment will need to investigate on the factors affecting girls education, women's businesses, etc. Once done the different assessments will highlight priority areas of government's spending. However, at the local level more women's participation in policy processes including revenue formation and distribution is key to achieve gender equity

I need to get more information on the article above; especially the statistics on women's pay. I am more interested on a research that reached to the conclusion that salaries paid to women are on average 63 per cent lower than those paid to men.