The data are un-ambiguous: Kenya’s economy is starting to catch up with the rest of the world. But many of you probably wonder if that is really true, especially when observing the streets of Nairobi or the daily life in rural areas. In other words, is economic catch-up translating into social progress?  Will today’s children live a better life than their parents? Will everyone enjoy decent social and infrastructure services in the new Kenya? Let’s zoom in on the case of health.

How healthy is Kenya today? Simply said, it could do better. This is important from an economic standpoint, because a population’s health is a key foundation for development. Healthy populations are more productive; they also save and invest more. On average and all other things equal, one extra year of life-expectancy is associated with an increase in a country’s GDP by 4 percent.

Today, Kenya is not reaping these “health dividends”. Life expectancy is still below what it was in the 1970s, and well below those of Asians and Latin Americans (which on average can expect to live 25 years longer).

Sadly, most of the diseases affecting ordinary Kenyans can be avoided. Today, about a quarter of a million Kenyans die from preventable diseases every year. HIV/AIDS, diarrhea and respiratory infections are Kenya’s greatest killers. In addition, everyday nearly forty Kenyan women die due to pregnancy-related causes, yet most of these deaths are preventable.

As in most other sub-Saharan African countries, maternal and child deaths mostly revolve around childbirth (newborn deaths contribute to two-thirds of infant mortality). There are some achievements though, especially in reducing tuberculosis and malaria, over the last ten years. Even the HIV/AIDS epidemic is getting under control, but remains the primary cause of preventable death.

One often overlooked fact is that the foundations of a healthy life are laid extremely early, and parents have a particular responsibility. People tend to become health conscious once their muscles and bones begin to ache on a regular basis (typically around the age of 40 or 50). This is too late, because the drivers of health are determined much earlier, in fact even before birth. Recent studies have shown that the first 1,000 days of one’s life are more important for future well-being, than the subsequent 10,000 days. The first 1,000 days include pregnancy and the first two years as an infant.

How can mothers help their infants? First, by giving them good food, especially by breast-feeding. Improved care during pregnancy and childbirth will be critical for making further progress in maternal and child health. Nutrition is an important determinant of the health and productivity of a population. Childhood malnutrition is known to be a critical underlying cause of child mortality. Over a third of Kenyan children are affected and the levels have remained more or less the same, since the early 1990s. Even among the richest households, 25 percent of children are stunted, suggesting a serious issue with child-caring and feeding practices.

The loss to Kenya’s economy as a result of stunting alone is estimated at US$2.8 billion annually.

In addition to these old problems, Kenya is also facing new health challenges that are a product of economic transition, such as diabetes, stroke and heart disease. Africans used to label them as “Western ailments” but millions are now affected in the continent, including the very young. High blood pressure and cancer, anxiety, and depression – which erode the quality of life and productivity – are starting to emerge as Kenya’s new diseases. By 2027, Kenya will suffer more from these new illnesses than traditional diseases even if deaths through injuries (especially car accidents) are excluded (see figure). 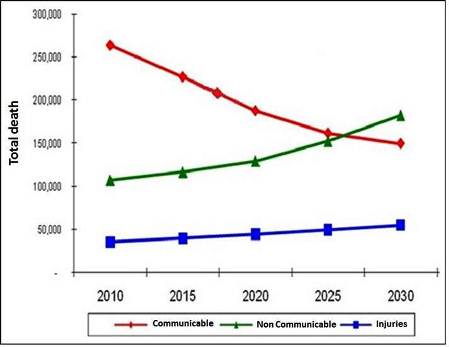 The combination of new and old health challenges creates a “dual burden”. Managing this dual burden is a transition challenge for Kenya, together with a demographic transition.

In future, Kenya’s high population growth (one million people every year) will be driven by those living longer, and who on average suffer from these new diseases.
The Kenyan health system will need to respond to the dual burden with a new focus on prevention, including lifestyle changes and effective primary level management of chronic diseases, such as diabetes and high blood pressure; while cementing gains made in the control of communicable diseases (especially diarrhea and measles), and improving maternal and new-born health.

It is easier said than done, especially in times of fiscal crunch. One option is to consider increases in "sin taxes" (such as taxes on tobacco and alcohol whose consumption directly affects the health of the population). This would also mean focusing less public money on tertiary care to manage the complications associated with non-communicable diseases, because such care is prohibitively expensive.

In the end, the best strategy is always prevention: parents need to be educated, because they have the future of their children’s health largely in their hands.

Nice, but I think it would be useful to track Kenya's healths tats over a longer period of time e.g 1963 to date

Greetings from Angola. Good points overall. However, as argued on previous blogs in this site, I would caution falling into the traditional false dichotomy between prevention vs. medical care, as both complement and reinforce each other. Rather, given the dual burden of disease, there is a need to think how a health system is structured following a continuum of care approach, anchored on a strong and well functioning primary care level--indeed, given technological developments in the medical field, many conditions that required in the past lengthy hospitalization now can be dealt effectively on an ambulatory basis at a lower cost and more comfort for the patient.

Also, we need to keep in mind that often in spite of all the prevention efforts, some people are going to have heart attacks or develop a cancer, which requires medical care at the hospital level. And, let's not forget that if you diagnose a condition at the primary care level--for example, cervical cancer, and if this condition is advanced then you need to refer the patient to be treated at more specialized levels of care--otherwise why to diagnose a condition in the first place?

In addition, it is important to be clear that life style behaviors and their social determinants require multisectoral interventions that are beyond the health system. As you suggested, "sin taxes" are effective fiscal measures among other multisectoral interventions but the goal in adopting them is to make, for example, tobacco products unaffordable--only in that way they will generate the expected public health benefits. So this requires not only a high level of excise taxation on tobacco products (e.g., 70-80% of the total price of the product), but also careful assessment of the type of excise tax to be adopted in accordance to the goal to be pursued, and strong tax administration, complemented by regulatory and education measures such as smoke-free public spaces, media campaigns, and smoking cessation counseling at the health facility.

The attached further elaborates some of the above points:

Ending the Communicable and Non-communicable Disease Divide in Africa

Sub-Saharan Africa: How can we avoid the disease silos trap?

Re-engineering of the primary health systems is an imperative if we are to adequately respond to the dual epidemics. The existing primary health care structures hardly pay attention to the NCDs .. Similarly the vertical program's often lead to missed opportunities and gross inefficiencies within the systems.
Still it is difficult to convince the decision makers on the importance of investing in interventions that address risk factors whose effects are not directly perceptible or could be far off in future. There is need to collect and package the evidence in a compelling manner such that the politicians pay attention.