The European refugee crisis: What we can learn from refugees in Sub-Saharan Africa

The thousands of people crossing the European borders in 2015 have attracted considerable media attention. While such an attention is welcomed, we do not hear much about the millions of refugees hosted in developing countries.

There is no doubt that the logistical, institutional, and socio-economic challenges are even fiercer in developing countries. Focusing mainly on Kenya, Tanzania, and Uganda, we reviewed the recent literature to draw a few lessons in a new working paper, prepared as background to the Poverty in a Rising Africa report. 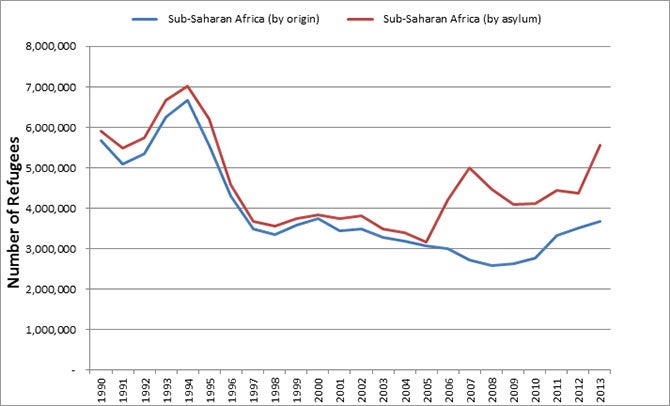 What we found was compelling. First, we underline the importance of market mechanisms in host countries. Previous literature had been very much focused on the health, environmental, and security consequences of hosting refugees. These concerns still rank as first priorities when refugees cross borders. But understanding the protracted refugee situation requires paying much more attention to the interactions between refugees and their hosts. In that respect, viewing the impact through the goods and labor markets helps to understand the distributional consequences of population shocks. In short, labor substitutes to refugees (e.g. landless or agricultural workers in Tanzania and Uganda) and net food buyers are more likely to suffer from population shocks, at least in the short run. A transition from relief to development, as formulated by the self-reliance strategy in Uganda, calls for strengthening the coping strategies for the households, in particular among the poor. Increasing land availability, securing property rights, and fostering agricultural productivity can also help in countervailing food price pressures, which are more likely to hurt the poor.

Second, the importance of local public goods such as road, education and health services are also illustrated in all three countries. While road infrastructure has been found to be a catalyst for local economic development, integrating education and health services provided to refugees and local communities should have promising potential. The transition at times of repatriation (or resettlement) has often been difficult in that respect. Improving health and education services in hosting communities would also help to close the gap between negative perceptions and positive outcome changes, revealed in some of our case studies.

Third, with the exception of Uganda, repatriation is often the preferred policy option for governments. Well, clear evaluations of the costs and benefits of repatriation compared to local integration (and resettlement) would help policy-makers. It should go hand-in-hand with the above desire to objectivize the local hosts’ perceptions. In terms of policy, too little is known about the efficiency of particular interventions to promote successful local integration.

It seems to us that these three lessons should put into perspective some of the concerns heralded around the current refugee crisis in the European Union. For example, evidence exists that even a large influx of labor via refugees in developed countries does not lead to downward pressures on wages. This is likely due to minimum-wage legislation in combination with the presence of unions. The corollary however is that newcomers have a hard time finding a job. However, the positive effect on capital owners, human or physical, seems to exist. With the influx of rather low educated people, then relatively speaking, highly educated citizens of host countries ‘win’ because their skills become scarcer. The profile of refugees coming in to the EU from the Middle-East however does not seem to fit this profile, as a sizeable number are highly educated. Alas, they cannot help fill gaps in the labor market.

Secondly, more people means more competition for services, and potential congestion. This is one of the points that disturb the electorate in European host countries. Many fear that refugees come to the EU to benefit from the services of the welfare state. The economic literature has not backed such a fear. On the contrary, in the long run, migrants tend to contribute more to social security than what they cost in terms of social benefits, particularly in aging societies. Such a misperception is similar to the criticism of the population living near a large refugee camp in a developing country; they perceive that all kinds of services are provided to the refugees and not to them. This element of contention can be dealt with effectively by granting access to the local population, in case of the refugee camp, and by reinforcing the quantity and quality of services offered to citizens of host countries.

And thirdly, as far as we know, most if not all quantitative and robust evaluations of the impact of policies and interventions for refugees (cash transfers, in kind subsistence, vouchers, etc.) have been tested in a developing country setting. There is a lack of hard evidence on the impact of measures taken by countries in the European Union and the Union itself. The current crisis seems to offer the ideal excuse to finally start with the measurement of the impact of some of these policies.

We should take the opportunity of the refugee crisis in the European Union to question more deeply the current development and protection system. We should help developing countries that are hosting the overwhelming majority of refugees to make it an opportunity for development, as evidence shows that with proper policies in place, refugees can be an asset in the search for sustainable solutions to protracted refugee situations.

This blog is part of a series reflecting on the findings of the 2016 World Bank Report “Poverty in a Rising Africa." Next in the series: a look at how poverty is falling faster for Africa’s female-headed households on Jan 4, 2016. Previous blogs in the series include:
Africa is rising! But are people better off?
Who will fund poverty surveys in Volkswagen countries