These days, job creation is a top priority for policymakers. What role do small and medium enterprises (SMEs) play in employment generation and economic recovery? Multi-billion dollar aid portfolios across countries are directed at fostering the growth of SMEs. However, there is little systematic research or data informing the various policies in support of SMEs, especially in developing countries. Moreover, the empirical evidence on the firm-size growth relationship has been mixed. Recent work of Haltiwanger, Jarmin, and Miranda (2010) in the U.S., suggests that (1) Startups and surviving young businesses are critical for job creation and contribute disproportionately to net growth and (2) There is no systematic relationship between firm size and growth after controlling for firm age. It is not clear whether these findings apply in developing countries where there are greater barriers to entrepreneurship, and where venture capital markets that finance young firms are not as well developed as in the US.

In a recent paper Meghana Ayyagari, Vojislav Maksimovic and I put together a database that presents consistent and comparable information on the contribution of SMEs and young firms to total employment, job creation, and growth across 99 developing economies. Our sample consists of 47,745 firms surveyed in the period 2006-2010. We then examine the relationship between firm size, age, employment, and productivity growth and how this varies with country income and find the following:

Figure 1.  Median Employment Shares of Firms by Size and Age 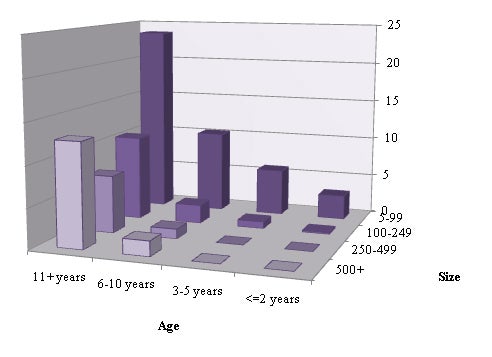 Earlier work has also shown new firm entry to be much higher in high-income countries. Taken together, these findings suggest that higher income countries are characterized by high rates of entry and turnover of small firms rather than a large SME sector. Firms younger than two years represent a very small proportion of total employment in our overall sample. Across countries, firms that are both small and old (specifically firms that are over 10 years old and with 5-99 employees) have the largest proportional share of total employment compared to other size-age groupings.

Second, not only do small firms and mature firms employ the largest number of people, they also generate the most new jobs across country income groups. In the median country in our sample, SMEs with 250 employees or fewer generate 86.01% of the jobs. Their contribution is higher (93.05%) in the countries that had a net positive job creation across all firms in the country. 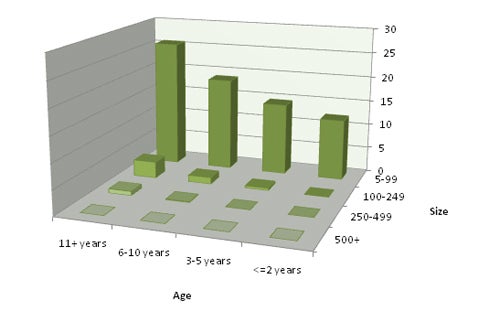 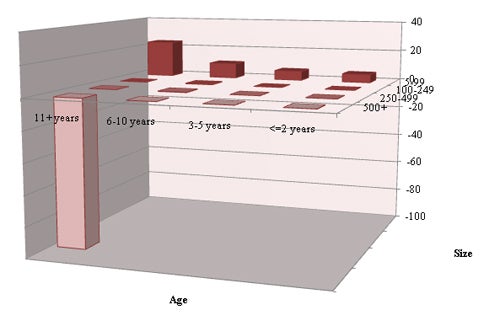 Third, small firms and young firms have the highest employment growth rates in regressions controlling for country, industry, and year fixed effects. However, small firms’ higher employment growth is not accompanied by higher sales or productivity growth. Large firms and young firms have higher productivity growth. Thus while SMEs employ a large share of workers and create most jobs, their contribution to productivity and growth is uncertain at best. Our results are robust to sub-sample analysis by country income group and by looking at countries with large versus small informal sectors.

While the cross-country database improves upon existing databases along several dimensions, our findings are subject to a number of caveats. Most importantly, enterprise surveys cover only the formal sector, excluding the informal firms.  Hence our results do not speak to informal enterprises. In addition we also do not have data on microenterprises (less than 5 employees) in our sample. Second, we have data only on surviving firms, which probably overestimates the growth rates for very young firms given they tend to have higher failure rates.

With countries all around the world struggling to recover from the crisis, job creation policies are at the top of the agenda for policymakers. Our results caution that the challenge for policymakers is not only to create more jobs, but also to create better quality jobs to promote growth. Overall, our results show that while SMEs employ a large number of people and create more jobs than large firms, their contribution to productivity growth is not as high as that of large firms.

Growth and increases in productivity require a policy focus on the likely obstacles faced by SMEs, which range from lack of access to finance, the need for business training and literacy programs, as well as addressing other constraints such as taxes, regulations and corruption—all of which are the focus of an active research agenda. In addition, policies to improve entrepreneurship and innovation are likely to be important, since lack of dynamism is a distinguishing feature of developing countries and young firms tend to be productive and among the fastest growing. Finally, our results also suggest a need for greater focus on large, mature firms which have a notable share of employment and also have higher productivity growth compared to small firms.

I just sent the data in an excel sheet to be attached to the working paper. Enjoy!

This is a very important and interesting finding and I guess leads to the question of which policies, amongst the many listed in your note, have the potential for the most impact on SMEs. As a former banker who has tried to engage the SME sector in India I feel that the information asymmetries and the systematic risks faced by SMEs are so large that any attempt to try and provide them with formal sources of equity finance at a sufficiently large scale is likely to be met with failure as are attempts to push larger banks to lend to them through priority sector mandates. In my view what is much more promising is to reduce the need for external equity itself by:

1. Reducing the risks faced by these business through carefully chosen supply chain interventions that take away systematic risks and replace them a with a flat supply chain charge. This has met with considerable success in India for existing supply chain linked SMEs (such as dealers and vendors of large companies) and IFMR Ventures is attempting to synthesis these supply chains in sectors where natural ones have not / cannot evolve.

2. Unlocking the embedded equity in the equipment that is sought to be used by the business (this is the resale value of the equipment for which a vibrant second hand market would need to be developed -- an insight I have gained from Professor Antoinette Schoar of MIT). This is the direction that IFMR Rural Finance is taking in its local financing work through their KGFS model.

3. Unravelling the information asymmetries either through standardised ratings templates in manner that CRISIL has done in India (they now rate over 20,000 SMEs) and / or by working through very local financiers who have an intimate knowledge of the business such as the KGFS entities of IFMR Rural Finance. There is a real opportunity here for Mutual Funds in India to launch Fixed Maturity Plans (FMPs) which have the goal of providing high yield debt to SMEs rated by CRISIL.

I have also been involved in entrepreneurship training programmes and have found them to be ineffective, very expensive and non-scalable. Attempts to offer SMEs subsidised credit through state owned institutions encourages capital intensity at the cost of labour intensity and perhaps introduces several other distortions.

If the rates of interest are kept risk-adjusted (and therefore sufficiently high) but the quality and speed of access is improved perhaps there will be no need to worry about which SMEs are efficient users of capital and which ones are not -- the cost of equity and the cost of debt will do that. To address this issue well regulators in India will have to start to take a more balanced view of the respective roles of banks and regulated non-banks and find a way to encourage banks to provide financing to non-banks instead of pushing banks to directly lend to these "priority" sectors -- their cost of operations and the national and centralised nature of their operations and now increasingly the shortage of capital under the new guidelines are all such that they are poorly placed to this effectively.

You brought up a very important point about the issue that the aid is being provided to the countries in order to develop these businesses which stabilize the economy is not doing its job. This of course is true, that the aid money given to these countries can help build a sustainable economy with jobs and such. But where is is all going? If it was put where its meant to be put, we would see a change in the countries. But we don't, I guess its just another case of the leaders in control of the countries stealing this money and putting it in swiss banks. Well I think this is completely America's fault. We want to help these countries, well lets open our eyes. People are greedy, we know these leaders will steal the money but give it anyway. A better way for us go about this, is providing a secretary of businesses within each of the countries we fund. That way we make sure no money is stolen and we got actually economist putting the money where it should go. All these "plans" we have aren't working, we need to really improvise, or our money is just wasted. I may be only learning about politics, but I still think that reading this, gave me better ideas then our leaders would.

I am a follower of your work on SMEs and I am doing some research in Southern Africa on how best to measure credit risk for SMEs in a developing economy setup. It is a well known fact that SME growth is highly constrained by lack of access to financing, an issue not prevalent in the developed world. The major suppliers of external financing of this segment, banks regard lending to SME as the riskiest and unprofitable business. Banks are keen to take advantage of large numbers of these firms and cross selling and other benefits they can derive from financing SMEs, engines for any meaningful economic growth and development of any country because of fear of risk.

So we are saying that if that risk could be measured for informed screening and underwriting thereby facilitating SME financing, a top priority of policymakers. Given the current disintermediation in financial sector, thining of profit margins, cut-throat competition and the advent of Basel II and III Capital Accords, commercial banks are realising the need to venture into SME lending business of which the majority of them lack the strategy to deal with the untraditional market.

To cut the story short, the major problem I am currently encountering is that of lack of data access for modeling purpose. Yes local banks (South Africa and Zimbabwe, for example) agree that there is da challenge when it comes to SME financing but say they cannot divulge client data, due to the confidential and security nature, to researchers yet in literature most solutions to banks' problems are generated by academics especially in developed countries. Because of this, they are making the area unresearchable, for data is blood of any research.

As a tried and tested researcher in this area, what would you advise me for I have passion for this type of research and also to acquire my PhD.

I look forward to your piece of advice

I could not find the data that you said you published together with the paper.
Is there any relation to the domain that a company works in? E.g agriculture? IT? ...