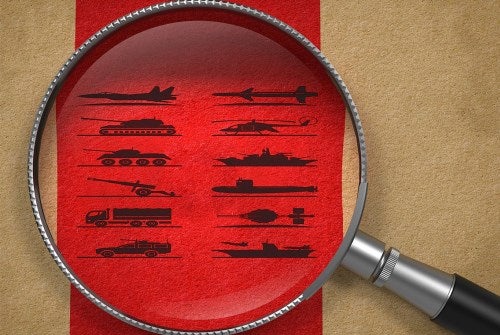 Defense budgets in the Middle East and North Africa are not public , oversight on spending is weak, and information on hidden defense spending is non-existent, says Transparency International-UK (TI-UK) of the 17 governments in the MENA region it scrutinized in a global report.

The “Defence Companies Anti-Corruption Index 2015” looked specifically for the checks and balances it says governments everywhere need to prevent corrupt practices by officials and others involved in their defense spending. Katherine Dixon, TI-UK’s Defence and Security Programme Director, concluded that in MENA, there wasn’t enough evidence of such checks and balances in the institutions important for reducing the risk of corruption in military spending.

Many governments in the region lacked political legitimacy, and on defense issues couldn’t be said to be acting in the interest of their people. Instead, they risked sparking unrest and violence: “Defense corruption erodes the ability of the state to fulﬁll its primary obligation - to protect its citizens,” Dixon said. “There’s lots of evidence that corruption is a very powerful enabler of conflict,” she added. The report says incidents of weapons reaching militant groups like the Islamic State are well documented .

TI-UK’s transparency assessments consisted of 77 questions, each covering five areas—political risk, financial risk, personnel risk, operations risk, and procurement risk. This resulted in a score ranging from 0–4. An overall percentage placed the country on another scale, ranging from A (“very low corruption risk”) to F (“critical corruption risk”). Eleven of the 17 nations TI-UK looked at in MENA received an F (“critical”); 5 received an E (“very high risk”); and only one country, Tunisia, received the better rating of a D (“high risk”).

At “critical risk” of the presence of corruption in defense spending were Yemen, Kuwait, Morocco, Libya, Iraq, Oman, Bahrain, Egypt, Qatar, Algeria and Syria, while Lebanon, Iran, Jordan, Saudi Arabia and the UAE were placed at “high risk” of having corruption in their defense sectors.

Jordan and Tunisia the region’s strongest performers in the anti-corruption index, and Tunisia the sole country to reach farther up the scale. The reasons for this include the fact that Tunisia’s defense budget is available to the public, and the country assigns two parliamentary defense committees scrutinize defense spending. A certain degree of openness towards civil society also helps Tunisia, according to TI’s UK-based Amira El-Sayed.

A “high risk” of corruption still exists in Tunisia’s defense and security sector , emphasized El-Sayed, who wishes to see more mechanisms for transparency and accountability introduced. “There is a lot of room for improvement,” she said, stressing the urgent need for security sector reform. Steps to be prioritized include increasing transparency, as well as more scrutiny in procurement, budgeting, institutional oversight and accountability.

And even though Tunisia’s Ministry of Defense has been open towards engagement with the public, Tunisia’s government could do more to build on this positive attribute by holding media briefings to increase the amount of public debate held on the defense sector. “It is up to Tunisia to decide which countries they want to be compared to,” concluded El-Sayed.

The index, which in 2013 covered 82 countries, in this edition assesses 120. Dixon is hoping the report will encourage governments to prioritize the creation of institutions that could operate with integrity—that is, on behalf of their populations.

In 2014, more than US$135 billion was spent on defense in the region , making military regional expenditure is some of the highest in the world , as per capita of GDP. But although defense spending is increasing, most countries lack transparent systems for defense procurement and strategic planning.

Most MENA countries do not publish their defense budgets  and, perhaps unsurprisingly, none provide information relevant to the sort of “secret” or clandestine spending that is often hidden from public view by states. And, all too often, the state procedure behind determining arms investments—known as “acquisition planning”—is either unclear or non-existent, with little or no public debate taking place about major decisions.

The report also identified the clear risk of corruption in defense spending in the private sector. No country provided accurate numbers on defense personnel, with secrecy across security and defense  establishments remaining “the norm,” the report stated, adding that this type of secrecy also increased the risk of fueling regional arms races.