Arab women’s autumn— What was there for women after the Arab Spring? 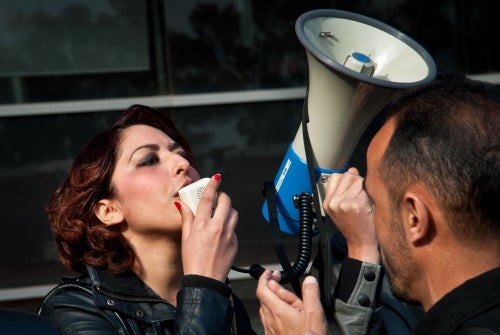 The political participation of Arab women in post-revolutionary Arab countries has been the subject of various studies and academic research. The 2011 revolutions marked a significant shift in the female political role in the region  because women were involved at the head of the Arab uprisings. The revolutions, which were initially secular and egalitarian, also unleashed long-repressed conservative forces, which have been eating in to the gains made by Arab feminists over the past decades.

From euphoria to disenchantment

So how have women fared after the Arab Spring?

According to the World Economic Forum’s latest Gender Gap Report (2015), the Middle East and North Africa (MENA) region ranks at the bottom in terms of indices for women’s political participation and empowerment. In the MENA region, women hold just under 13% of parliamentary seats , and in most countries, structural barriers such as discriminatory laws and institutions still limit the options women have to participate in politics or run for office. In Saudi Arabia, women are only able to vote in local elections , a right acquired in just 2011 and with strict conditions.

Quota systems—or affirmative action— to boost women’s political empowerment have proved successful in at least increasing the proportion of women represented in Parliament. In countries like Tunisia, Morocco, or Lebanon, quotas have been the main drivers of women’s representation  in Parliament. However, in Egypt, the number of women represented in parliament remains as low as 2% , with the exception of specific periods of time when female quota systems were adopted (in 1979, 1984, and 2010).

While these examples demonstrate the usefulness of affirmative action, one could argue that the lack of a favorable environment for effective female political participation will continue to hinder the number of women represented in politics, and therefore their political credibility and weight.

There are a few exceptions of women who have succeeded in breaking the political glass ceiling, like Hala Shukrallah, leader of the Egyptian Dostour Party; Louisa Hanoun, head of Algeria’s Workers’ Party; and Nabila Mounib, the secretary-general of Morocco’s Unified Socialist Party.

In the Gulf countries where women's representation remains marginal, the political sphere has seen some recent positive developments. In the United Arab Emirates, Amal Al Qubaisi became the first female speaker of the House  and seven women have been nominated in the latest cabinet. In Saudi Arabia, women took part for the first time in municipal elections held last December and many female candidates won municipal seats.

But the wider reality shows that, in the Arab world, men continue to dominate the political arena . That this remains the reality is something one could hardly challenge.

Every year, on March 8th, Arab newspapers, magazines, and other media talk about women’s inclusion. Cynical minds will view it wishful thinking if there’s no real political will for greater equality and better female representation in political dealings. Like all other human rights-related debates in the region, the debate on women’s rights has become one of secondary importance in the face of more urgent concerns, such as security, public safety, and the threat of terrorism. The voices of feminists across the region go almost unheard at a time when countries are struggling with their weak economic performance, plunging oil prices, and social unrest.

Women’s weak participation in public life in MENA, rooted in social and cultural norms, contradicts the ability they have to be leaders and agents of change demonstrated throughout the Arab world’s history. From a development standpoint, the participation of women is essential to be able to build and sustain stronger economic and political systems. It matters to include the female perspective in political decision-making.

Building effective participation in MENA calls for more institutionalized patterns of participation for women in the political sphere as decision makers. It also requires more effort to alter people’s mentality towards women’s role in public life, and sow the seeds of a more egalitarian culture in schools to the media and parliament. Individual women, such as Hala, Louisa and Nabila, have overcome political discrimination and other obstacles with great acclaim, but for Arab women as a whole, a more level playing field will need to become a reality, and not just something that is only wished for.
Topics
Gender
Countries
Algeria
Djibouti
Egypt
Iran
Iraq
Jordan
Kuwait
Lebanon
Libya
Morocco
Oman
Qatar
Saudi Arabia
Syrian Arab Republic
Tunisia
United Arab Emirates
West Bank and Gaza
Yemen
Regions
Middle East and North Africa This focus on formal "political participation" may be somewhat misguided in countries where parliaments (and in Morocco the elected government) have little or no power anyway. As long as those remain puppet shows, what kind of participation are we talking about? How do you define "political participation"?
More "participation" of this kind may help to change cultural norms as educated women become more publicly visible, but politically it remains participation without power for ordinary women, as it does for men.
Meanwhile, behind the scenes, I'm sure some spouses and female relatives of the true decision-makers wield considerable influence, as they have always done, everywhere in the world.

-Dear Till,
Thank you for your comments; formal political participation is already a gain for Arab women’s role in politics; this wouldn’t however impede their growing role as influencers in strategic decision-making spheres, if and when there is a favorable context for their effective political assimilation, as pointed out in the article.

-Dear Hala,
The blog on Arab women’s participation was meant to shed some light on the state of women’s participation in the Arab world and not to provide an exhaustive description of the situation in each country. Moreover, each and every country in the region has experienced its own unique revolution or evolution during the 2011 Arab spring events, evidently at different levels and degrees, hence the inclusion of countries like Morocco or Algeria.

Thanks Ibtissam for the nice piece! I think that women representation in the Egyptian parliament is no more "2%"--that was in 2012. In 2015, the representation skyrocketed to ~15%.

Thank you M. Duban, the 2015 elections were indeed marked by greater women participation thanks again to the quota system.