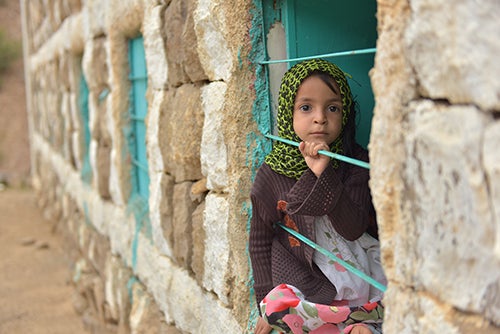 “We had lost hope,” said Muneera’s father. “As her health deteriorated and her body weakened, we worried that she could not last much longer.” Six months short of her fourth birthday, Muneera was suffering the effects of malnutrition, which had put her life in danger. Though she lived near Yemen’s capital, Sana’a, Muneera’s family did not have the resources to take her for medical care. Like thousands of other children in Yemen, the deteriorating conditions due to ongoing instability had led to malnutrition.

Fortunately, a mobile medical team was able to reach her. The team was able to provide therapeutic feeding to help Muneera overcome the effects of malnutrition, and her life is no longer in danger.

“I have been without a job for a long time because of the war,” Muneera’s father explained, “and I cannot provide enough food for my family.”  If the medical team at the health facility in Al-Hayma had not visited his family, he was sure that he would have lost his daughter.  The health facility in Al-Hayma is supported by the World Bank as part of the Emergency Health and Nutrition Project (EHNP).  Implemented in partnership with UNICEF with the aim of supporting Yemen’s health system, the project provides necessary supplies, operating expenses, and support to medical staff so they, in turn, can provide health care to people in Yemen.  The project funds mobile teams to seek out the most vulnerable people and ensure they are receiving care.

Muneera began undergoing treatment on June 1, 2018 at one of the mobile clinics supported by the EHNP. After a week of follow-up and supervision by the medical team, her health condition improved. The medical team leader, Ibrahim Rabie’a, said that on May 31, when the team first found Muneera, she was suffering from malnutrition with health complications, such as acute pneumonia, fever, and movement difficulties. When her family couldn’t afford to take her to the hospital, the team responded to the case and performed initial medical support. Then they followed up on her condition and managed to visit her every 14 days until she passed the critical stages of her illness. During a recent visit from the medical team, Muneera was already feeling better, and was up and playing with her peers near her home. The Emergency Health and Nutrition Project is continue to work to contribute effectively to the treatment of nearly 400,000 Yemeni children suffering from severe acute malnutrition and needing urgent care. This project has contributed to the treatment of more than 130,000 severely acute malnourished children so far in Yemen between January and June 2018. Muneera was one of them.
Topics
Fragility Conflict and Violence
Education
Health
Poverty
Countries
Yemen
Regions
Middle East and North Africa