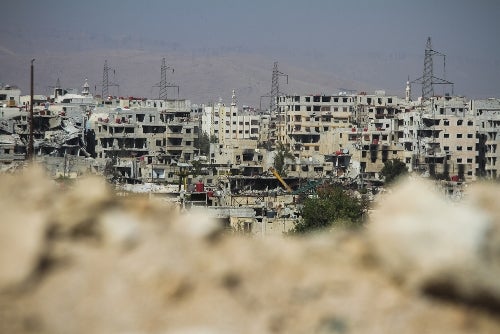 In February 2012, I wrote a blog about the relevance to the Arab revolutions that had swept the region of  the UN’s then recently unveiled “Resilient People, Resilient Planet: A Future worth Choosing,” which called for the eventual adoption of the Sustainable Development Goals (SDGs). Now three and a half years later, at the United Nations General Assembly in New York recently, world leaders endorsed the SDGs, an ambitious agenda that aims to end poverty, promote prosperity and protect the environment.

Back in 2012, I put the goals articulated in the context of the Arab “Spring,” stating that the SDGs “link to issues that are at the heart of the Arab revolutions - economic growth, equity and inclusion, and policies that move us away from unsustainable use of natural resources (think water for MENA and subsidies on energy as well as other policies that misdirect resources)”. Needless to say all these issues are still very much with us but the issue of sustained violent conflict had not intruded as yet into our collective consciousness as it has so forcefully since. At the time while there were signs of things to come – some clearer than others – Iraq, Libya, Syria and Yemen were still largely whole and a positive outcome sooner rather than later seemed a possibility while the precursor to ISIS had been defeated and a major resurgence seemed unlikely.

Now three and a half years later the determining factor in much of the region is fragility and conflict. There is open warfare in all four countries and a new generation of extremists present a serious challenge throughout the region and reaching into Europe, the US and beyond.

Indeed, fragility and conflict is a global challenge and in one manifestation alone, the World now has 60 million displaced people versus 45 million in 2012.  Back then there were less than 700,000 Syrian refugees and some 2 million IDPs by end 2012. These numbers are now respectively at over 4 million and 8 million. In addition there are now 4 million Iraqi IDPs and Turkey alone hosts over 100,000 Iraqi refugees. Needless to say, neither Libya nor Yemen have been spared the humanitarian challenge.

All this highlights the fact that faced with this challenge at the regional and global levels, humanitarian needs are now huge and going unmet in significant amounts. In 2000 global humanitarian spending had been $2 billion, it hit $25 billion in 2014 and continues to rise though plagued by shortfalls of 40% for 2015. In the meantime  conflicts cost the global economy $14.3 trillion – over 13 percent of global GDP. Yet, the distinction between humanitarian and development aid is increasingly less clear. This is especially true in fragile and conflict affected countries, as agencies struggle to deal with issues around education, health, and the sustainability of at-risk communities.

Indeed an important lesson from the Millennium Development Goals, which the SDGs will replace at the end of 2015, was on the critical importance of dealing with fragility and conflict – 50 of the most fragile countries are home to 43% of people living in extreme poverty today but by 2030 this will rise to 62%. The UN’s final report on the MDGs notes that “conflicts remain the biggest threat to human development”.

What is increasingly clear is that the fastest growing inequality is between fragile and conflict states and stable ones. David Miliband current President and CEO of the International Rescue Committee and former Secretary of State for Foreign Affairs in the UK calls for establishing special targets for people in fragile and conflict states,  around which humanitarian and development agencies could align their efforts.

Alignment and partnerships with other donor agencies, humanitarian organizations, governments, civil society organizations and the private sector underpins the World Bank Group’s new MENA strategy. The new strategy starts off by recognizing that regional transitions have been much more painful and violent than foreseen four years ago. The focus now is on using development to promote peace and social stability, a sine qua non for ending poverty and boosting shared prosperity. Indeed given the huge spillovers from conflicts in the region, refugee flows, terrorism, etc. peace and stability in the region is a global public good. There are four pillars to the strategy. Two address the causes of conflict and violence, one being renewing the social contract in the region via political and socio-economic structures that are inclusive and pushing for meaningful regional cooperation in the least integrated region in the world. The other two pillars address the immediate consequences of the crisis, i.e. building resilience to the shock of massive forced population shifts by supporting the displaced as well as host communities and preparing recovery and reconstruction wherever and whenever peace emerges. This harks back to our immediate post World War II mission, when we were first established as the IBRD - the International Bank for Reconstruction and Development.
Topics
Fragility Conflict and Violence
Social Development
Countries
Algeria
Bahrain
Djibouti
Egypt
Iran
Iraq
Jordan
Kuwait
Lebanon
Libya
Morocco
Oman
Qatar
Saudi Arabia
Syrian Arab Republic
Tunisia
United Arab Emirates
West Bank and Gaza
Yemen
Regions
Middle East and North Africa