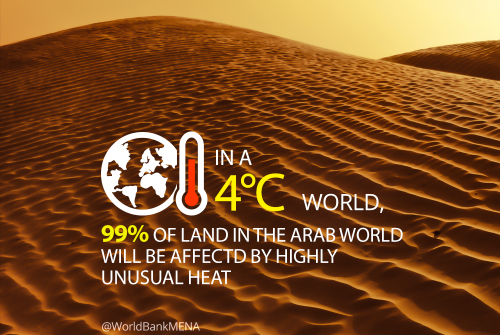 If the earth gets much hotter this century, life will get harder for most people across the world. But how much harder will it be for people in the Middle East and North Africa (MENA), a region already known for its heat and aridity? For many, climate change evokes thoughts of bitterly cold winters, burning hot summers, long droughts, and spectacular floods. But for MENA, climate change will also mean the loss of traditional incomes, forced migration and a constant struggle to make ends meet. Earth Day is a moment to examine the link between the impact of climate change on nature and humankind.

In parts of the region, this future has already come to pass: Syria and Egypt both bear social, economic, and political scars brought about by recent changes to their climate. In 2008, the Middle East’s driest winter in just over a century forced farming communities to abandon rural areas of north-eastern Syria and move into the city of Aleppo. There, economically they became impoverished and, politically, disaffected. In Egypt, by 2009, many people had migrated into the metropolis of Cairo from the Nile Delta, one of the world’s most populated, fertile areas, responsible for 63% of Egypt’s agriculture. They were driven by unemployment and poverty, the result of too little water for everyone to rely on income from farming.

Fast-growing populations , hotter summers, less rainfall, and less run-off from mountains covered in snow , are likely to disrupt agriculture—a sector employing more than 35% of MENA’s workforce. This could cause more hardship and unrest in countries already suffering from both. Even before the current conflict in Yemen, the two million residents of Sana’a, Yemen’s capital, could rely on supplies of piped water only once a week at best. Otherwise, those that could afford it, had to buy it.

The climate science outlined in our latest Turn Down the Heat  report, looks at the likely impact of the present rate of 0.8°C warming in MENA, as well as projected higher rates of 2°C and 4°C, particularly on water. The region has less than 2% of the world’s renewable water, and includes some of the world’s most water scarce countries. Even under less extreme scenarios, it is clear that the impact of climate change will be increased competition over scarce resources, and greater poverty and forced migration.

It is happening already.

Left unchecked the situation will worsen, adding further sources of instability in a fragile region. Yet action can and must be taken. Adaption along with mitigation measures will be essential to build up the resilience needed to cope with the changes ahead and to lessen the effects for the many whose lives will be radically altered.

Tunisia has set an example by including the protection of the environment in its new constitution. Morocco has made adapting to climate change and setting the country on a path to green growth a national priority. The Maroc Plan Vert is focused on sustainable water and land management, along with agricultural adaptation. This should be happening across the region. More investment in research is needed to develop smart, climate resistant agriculture. At the same time, economic diversification is essential to help vulnerable populations develop new revenues. Practice Manager for the Environment, Natural Resources and the Blue Economy in West Africa. The World Bank.