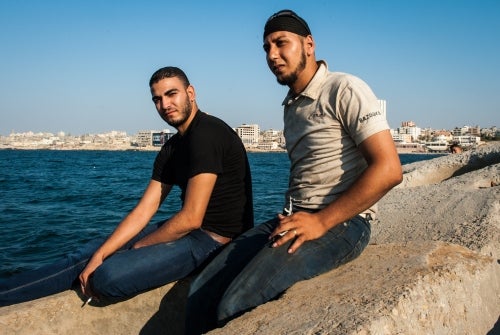 In 2010, just before the Arab Spring, the ASDA’A Burson-Marsteller Arab Youth Survey* identified a soaring social dissatisfaction among the region’s youth. Democracy was then the top priority. Ninety-two percent of those polled responded that “living in a democracy” was their greatest wish. The same poll conducted earlier this year shows a marked decline in aspirations for democracy.

Four years after the wave of demonstrations spread across the Arab world, raising immense hope for change, young people appear to be skeptical that a democratic system will ever work in the region. Only 15 percent of the Arab youth polled in 2015 identified a lack of democracy as the region’s biggest obstacle.

“The optimism of the 2011 Arab Spring dwindled when the hopes and aspirations of the Arab youth didn't come into fruition in a timely manner,” argues Holly Dagres, an Iranian-American writer based in Egypt. “Many assumed democracy would provide better standards of living (bread), social justice (dignity) and freedom.”

“I believe this disappointment is quite normal,” remarked Afef Abrougui, a Tunisian blogger, and added, “there were very high expectations and hopes among youth, but as soon as counter-revolutionary forces, old men, took over, disappointment grew, and many felt that they were excluded from the very revolutionary process they had started by groups who had nothing to do with it.”

The result has been an increasing dissatisfaction with the fruits of revolution. In 2015, according to the poll, only 38% of young people argue that the region is now better off after the revolution - that same figure was 72% in 2012. “I noticed the decline in Libya last year,” explained Libyan student Asma Khalifa, currently in Turkey, “Despite our efforts in raising awareness of the importance of voting, many youth told me that they find it pointless.”

According to the poll the majority, 81%, also express “concern” about the unemployment rate. “Many are now worse off financially than they were before,” explains Dagres who is not surprised by the recent findings. “In 2015, stability is a priority over democracy because with it comes a steady economy and more, as well as better, opportunities.”

The current instability in the region appears to have produce a high level uncertainty over whether democracy could ever function. In the recent poll, 39% agreed with the statement that “democracy will never work in the region,” 36% think it will work while the remaining 25% are unsure. “These results make me angry,” said Abrougui. “I believe that the problems the region faces today are due to the lack of democracy,” argued the Tunisian blogger. “For me, those who agree with the above statement are saying: ‘well, we tried democracy and it didn’t work.’ Really? Have we ever really tried democracy? As if four years is enough to try to build a democracy.”

However, to Bassam Aoun, a Lebanese contributor to the online blog Your Middle East, living in the United Arab Emirates, the responses to the statement are not surprising. “The notion that democracy is a one-size-fits-all solution is long gone here in the region,” he explained. Aoun went on to describe how many of his friends now discuss whether it was actually better under dictatorship. “It is an indicator of just how far the Arab Spring outlook has gone awry,” he observed.

Khalifa agrees. “There are underlying cultural and social obstacles that impede the democratic process,” she added, “power always seems to revolve around old men in suits, who continue to control the resources.” According to Khalifa there is a big generation gap between the youth and these ‘old men’. Despite the region’s large youth population, “governments and policies continue to marginalize young people.”

To Lebanese writer and student Bayan Itani, the poll results also reveal a lack of understanding of the meaning of democracy. “Democracy is not a conspiracy, not an attempt to take over culture, traditions, and religion,” as she says some try to claim. “With the increase in sectarian divisions and extremism, we need civil society institutions more now than ever.”

Yet, despite the pessimism expressed in the recent poll, not everyone is ready to give up on democracy. “Post-colonization, dictatorships, and the rise of Islamic extremism all play a role in making the path to democracy all the more complicated,” admits Dagres, “but it doesn't mean it will never work. Tunisia is a perfect example.” According to the writer it is too early to dismiss the outcomes of the Arab Spring. “It will take another twenty years or so to determine if the uprisings really were successful or not.”

Aoun argues that the conditions are not yet ripe for democracy. It requires a certain harmonious set of institutions and the will for different groups to work together, he said. “When will democracy work?” Aoun asked rhetorically, “when we realize that we have to co-exist rather than dominate one another.” Unfortunately the biggest obstacles on the path to democracy, are those
with religious, political and self interest groups or individuals.