Beyond Remittances: How 11 Million Migrants from the Arab World can Impact Development The Middle East and North Africa (MENA) region has a large diaspora. According to the latest United Nations estimates, 11 million citizens from the MENA countries lived abroad in 2013[i]. Many of the members of this group hold prominent positions in their adopted countries. They have the potential to contribute to the development of industries in their countries of origin.

Executives in multinationals can influence the choice of locations abroad in increasingly defragmented supply-chains. This is especially relevant for members of the diaspora.  Seddik Belyamani, originally from Morocco, was Boeing's top airplane salesman, and was instrumental in converting an initial push-back by Boeing’s executives into an interest and a first mover investment in Morocco. Boeing, the airline and French electrical-wiring company Labinal SA in 2001 opened a small operation preparing cables for Boeing 737 jetliners, named Matis. Matis prepared wire bundles and shipped them to Boeing plants in the U.S. for installation. Today, the industry employs almost 10,000 Moroccans who earn about 15% above the country's average monthly wage of roughly $320.

Egypt accounts for the largest stock of migrants with more than two million citizens living abroad, mostly in the MENA region (Saudi Arabia, Kuwait and Jordan). Conflict countries such as West Bank and Gaza, and Iraq also have a large stock of migrants in the region, followed by countries with large populations, such as Morocco and Algeria. Less than a million MENA migrants are established in Northern America, mostly originating from Lebanon and Egypt. Although, the majority of migrants from the Maghreb reside in Western Europe.

An estimated 2 million MENA migrants residing in the wealthier countries of the Organization for Economic Co-operation and Development (OECD) are highly skilled (about 0.5 percent of the MENA population). This number is relatively small in absolute terms compared to the 2 million highly skilled Indians residing in the OECD, or the corresponding 1.6 million Chinese and 1.4 Philippines. However, when compared to the country’s home population, some MENA countries fare pretty well. According to the OECD, Lebanon’s high-skilled diaspora stands out with a rate of 3.41% (compared only to Ireland’s 4.95%), followed by Morocco (1.21%), Tunisia (0.87%), and Algeria (0.80%). 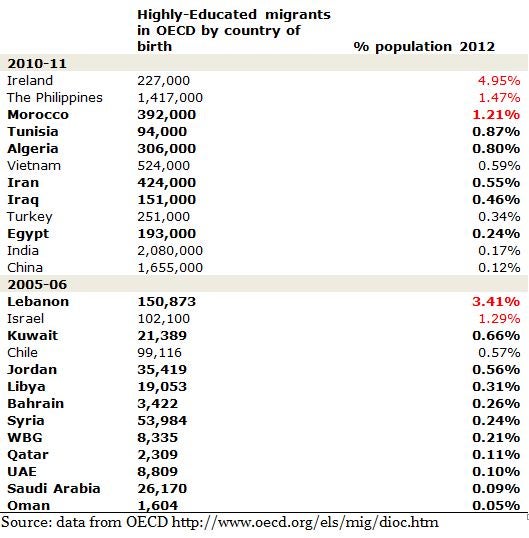 ​MENA countries could benefit immensely by leveraging the expertise and international exposure of their citizens living abroad.  Migrants should not be considered solely as providers of remittances. They represent a huge untapped source of economic development for their countries of origin. They can play a significant role in connecting people and businesses between home country and global markets, in transferring their management and professional knowledge and expertise to local entrepreneurs and young professionals, by investing remotely in new ventures or existing small and medium enterprises s, and by establishing trade links.

The role the diaspora can play is particularly important  MENA, which is not only one of the least integrated regions in the world, but all the region’s economies , albeit at different levels,  also suffer from systemic and structural lackluster private sector investment and large unemployment rates (including among young graduates).  MENA also has very low  intra-regional trade and foreign direct investment . The MENA diaspora can be an important catalyst for fostering globalization and regional integration. Yet, very few MENA countries have considered tapping into this large potential, and few mechanisms are in place to facilitate or recognize the role the diaspora can play.

The MENA integration team at the World Bank is reaching out to MENA citizens living abroad to get their views on how they would like to contribute to the economic development of their country of origin. We also want to identify the main obstacles to their involvement, and   changes needed to encourage their involvement. The findings from our survey will provide a better understanding of how the MENA diaspora would be prepared  to contribute to the global and regional integration of their countries of origin. In addition, it will help inform the World Bank Group, development partners, and governments on policies and programs that can channel the immense potential for development inherent in migration and the diaspora.

We invite you to join in and add your voice by taking our poll: