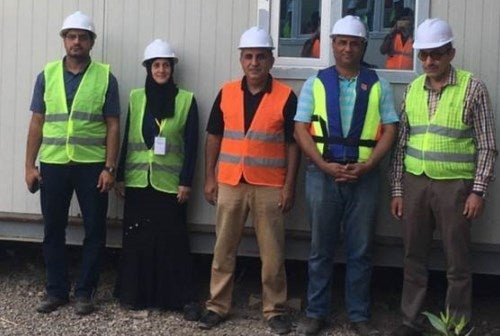 During wars, it is widely recognized that women and young people are the primary victims. Women are vulnerable to exploitation, abuse, sexual slavery, and forced recruitment into armed groups. Yet as the survivors of violent conflicts, women find reconstruction, as a window of opportunity to take a leading role in this operation. With determination and courage, they return to destroyed communities and actively, begin rebuilding infrastructure, restoring and developing traditions, laws, and customs.

In a country like Iraq, where women are still faced with old social, cultural, and legal obstacles, they are succeeding in proving that they can work side-by-side of their fellow male professionals, in, what is considered a men’s world, towards the reconstruction of infrastructure and reinstating services in the Iraqi cities liberated from ISIS.

Over the past 15 months, I have been honored to meet and work closely with young female Iraqi professionals who have shown exemplary commitment to the reconstruction program of parts of Iraq that were destroyed during the war on ISIS. However, I realized that to take part of this progress is not as easy as one can imagine. “When working and coordinating with a team comprising of men, the challenges that I overcome with women colleagues working in the structural engineering and construction field is empowering and gives hope for my generation to take a role in rebuilding Iraq and restoring stability and security in the liberated areas affected by the terrorism,” said Ashti Alwindi, a young procurement engineer at the Ministry of Construction and Housing in Baghdad. Ashti’s main task is to coordinate the procurement activities for the reconstruction of the roads and bridges damaged during the war on ISIS with funds provided by the World Bank as part of the Emergency Operation for Development project.

Office work is not the only space for women in a fragile context. Motivated Iraqi female planners and engineers are constantly exhibiting the courage in being the first passengers on the “ride” going for an inspection site visit in the areas that are still considered a high security risk. Engineer Suhad Abullah describes the site visits as strengthening the sense of responsibility towards the completion of the project, a source of satisfaction to see what was just a design and a vision become a reality, offering hope and optimism to return home to the thousands of Iraqis who were driven out of their homes during the war on ISIS. “Site visits give me the opportunity to communicate with the community, especially women and young people, and understand their needs and their pain. Acknowledging and expressing their joy in what I am accomplishing, incentivize me to complete what I started, overlooking the challenges that I face in my work environment”, said Abullah. 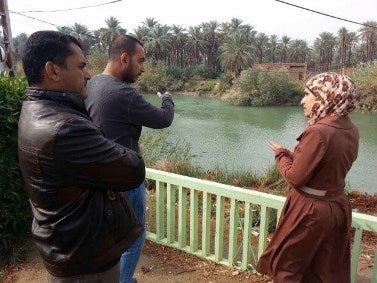 An enormous accountability lays down when managing funds especially when it is financed by the World Bank. Nevertheless, women in Iraq are handling this function with exceptional skills following closely the guidelines set in the financial guidelines for the project. “The way people look at my job disappoints me,” said Adwaa Mohammed, the Financial Officer at the Ministry of Construction and Housing in Baghdad. “It is seen for my surroundings as data recording and filing, while managing funds, especially when received from international organizations is a challenge by itself that requires high capacities and knowledge of policies and regulations”.

Despite the importance of women’s inclusion in stabilization and reconstruction operations that is becoming well recognized in the community, there is still no strategy, or mandate, that exists to ensure implementation.
Topics
Fragility Conflict and Violence
Gender
Countries
Iraq
Regions
Middle East and North Africa After the war on Iraq that started back in 2003 followed by the terror from ISIS and the use of Izidi Women as merchandise and war trophies it is great to see Iraqi women playing a role in the reconstruction and reform of the Iraqi Society.. Great Job World Bank.. keep up..

Thanks you for sharing these inspiring comments.

Thanks for showcasing this case and hope to see more of these in the near future from other countries in the region.