Preparing for the Future: Coordinating Syrian refugees and the diaspora 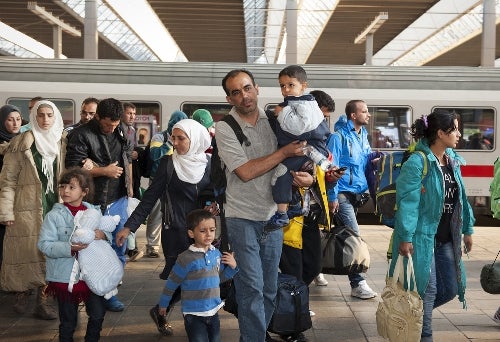 I have been looking for possible sources of investment and possible markets that would help both Syrian refugees and their host communities, and, as someone who has worked on the subject of the private sector for two decades now, one of my first questions is—“what role can the diaspora play?”

So, when looking at this challenge in Jordan, I have been pushing the idea within the World Bank that, if organized to do so, the Syrian diaspora can make a real difference to the livelihoods of refugees now in Jordan and other host countries, and of Syrians in the future.

In casting around for ideas, we have found all sorts of interesting tidbits of information: We found a Syrian entrepreneur in Jordan who was manufacturing candies and selling them to his cousins in the Dominican Republic. We learnt about a Syrian businessman in London who was putting together a US$100m social impact investment fund for refugees. We discovered a diaspora-based NGO in San Francisco that dreams of getting Facebook to employ, long-distance, Syrians in the camps.

The more we looked, the more we found this sprouting of goodwill and of interest in making things happen. And we found that it was not only investment but markets, business opportunities, and skills that were potentially available. The more we contacted people, the more we found other people, as well as finding remarkable support for the notion of doing something about it all.

So then we asked ourselves what we could do as a Bank. We could see strong value in coordinating three main angles; (i) the power of information, just finding out what was available in terms of willingness to help; (ii) the benefits of building trust and facilitating engagement; and (iii) the identification of constraining factors.

We had also learnt from the past that while we could help facilitate coordination, we could not lead it. For this to be sustainable we needed the diaspora themselves to lead, with our role being to help members of the diaspora solve any problems they faced.

We are just beginning this work and, over the next few months our dedicated team, Ola Hisou (originally from Aleppo) and Helen Akanisi (who has worked on similar initiatives in Africa), will be organizing a series of consultations in key locations in the Arabian Gulf as well as in Syria’s near neighbors (Jordan, Lebanon, Turkey, and Egypt), and in Europe and the Americas.

The Americas is interesting as this was the destination of the first wave of the Syrian diaspora in the late 19th century. When one looks at the Mashreq as a whole, it is estimated more than 10 million people, many of them Syrians, went primarily to Brazil, Argentina, and the USA. Some of their descendants became famous: Carlos Slim, Selma Hayek, Carlos Menem, and Steve Jobs, to name a few.

We then plan on going to Frankfurt in late January 2017 to hold a conference with interested stakeholders in order to share what we know—the results of our consultations and surveys and important experiences—and develop an action plan to move forward. And, in terms of knowledge-sharing, our colleague Mariem Malouche is working on a forthcoming report on diaspora, which will be an important part of our input.

From this modest start, we are hopeful that a sustainable platform will develop for the benefit of refugees who can use it to coordinate, facilitate information-sharing and constraint resolution, and support the many individual efforts currently taking place.
Topics
Fragility Conflict and Violence
Competitiveness
Social Sustainability and Inclusion
Urban Development
Countries
Jordan
Syrian Arab Republic
Regions
Middle East and North Africa Dear colleagues,
Let me first congratulate and thank you for addressing some of the crucial issues facing the people of Syria. I was born and finished secondary school in Iraq and live since 1960 in Germany, where I accomplished my university studies and spent all my professional live in the field of International Development Cooperation. Since a few years I am working voluntarily in the field of migration, assisting refugees from Arab countries to organise their daily live and overcome cultural barriers to enter into the German society. On the other hane, I assist German professionals and voluntary workers in this field to strengthen their intercultural capabilities to deal better and more effectively with the refugees.
Having introduced my work briefly, I wish to express my wish to get in contact with you and particularly to participate in the conference that you are planning to hold early 2017 in Frankfurt, my hometown.
Please let me know with whom can / should I communicate (email address). Then, if desired, we could enter in a dialogue on conceptual and practical issues related to the problems, that our people and our countries are suffering from. Since I am also in touch with diaspora organisations, I might be able to assist to a certain extent in the organisation of the planned conference in Frankfurt.
I look forward to hearing from you.
Best regards and wishes
Yousif