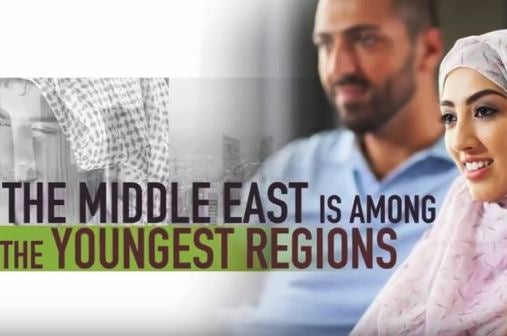 Young Arabs express the same concern over the rise of the Islamic State (IS) as young people do elsewhere, the annual Arab Youth Survey reveals. For the second year in a row, the “rise of” IS militants is perceived as the main problem facing the region , with four in every five young people interviewed saying they were more concerned about it than other problems. Its public appeal may have also decreased slightly, findings in the survey suggest.

About 50% of the 3,500 Arab men and women questioned in the 18 to 24 year age group from 16 countries in the Middle East and North Africa (MENA) considered the rise of IS to be today’s biggest obstacle, an increase from last year’s 37% of people who thought it was the region’s main problem. Their other main concerns were the broader threat of terrorism, unemployment, civil unrest, and the rising cost of living. The survey was carried out in about six weeks during the first two months of this year. 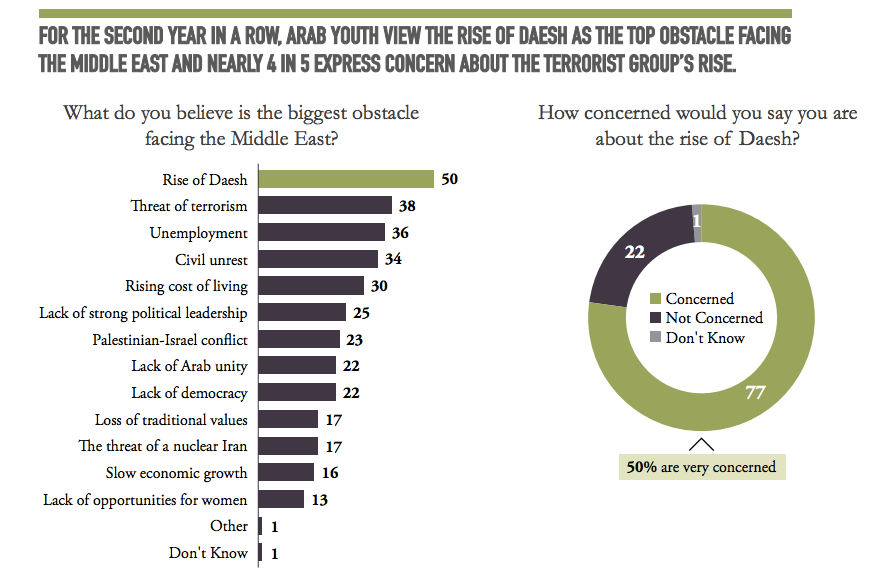 Almost 4 in 5 of the young Arabs in the survey ruled out supporting the group, even if IS stopped using so much violence, a drop from 2015 when the figure for the same question was 19%. “The majority of Arab youth reject IS because they are aware of the atrocities ,” argued Tunisian activist, Lina Ben Mhenni, who works on youth issues. “They also understood that this organization is taking advantage of the despair of young people and their ignorance.” Most young people also believed the group would fail in its self-professed aim of establishing a geographically defined Islamic State, or caliphate. 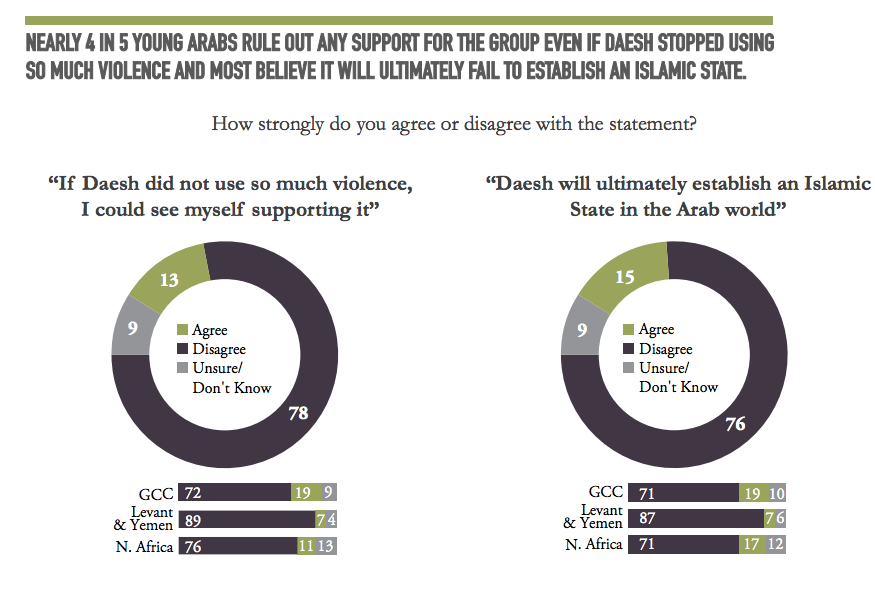 At about 29%, MENA has some of the world’s highest youth unemployment rates , and about 24% of interviewees believed the lack of jobs and opportunities to be the main explanation for why people joined the militant terrorist group. But, using the Arabic colloquialism for IS, slightly more (25%) interviewees stated: “I don’t know why anybody would want to join Daesh.” Second to unemployment was a belief that people joined IS because they thought its interpretation of Islam superior to other interpretations.

“Some young people are desperate because the situation has worsened for them,” argued Ben Mhenni. “They became fragile, they feel that they are marginalized, and they became easy targets for the recruiters of the terrorist organizations.” Interviewees also believed religious tensions between Sunni and Shia were contributing toward IS recruitment, as well as tensions with other religions in the region. The rise of secular, Western values is seen as another factor that, ironically, ends up fueling IS recruitment. 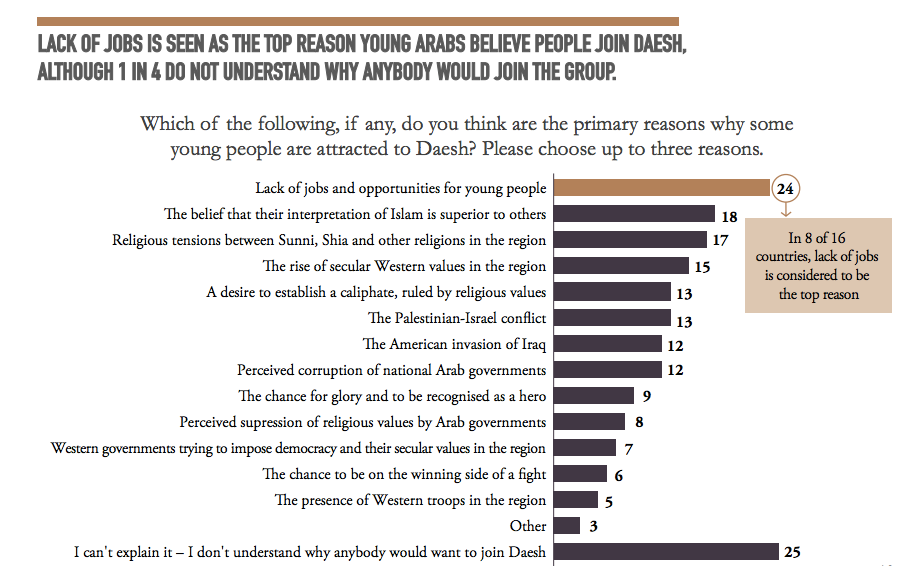 The course terrorism has taken in MENA has altered young people’s priorities . Just over half—53%—of respondents argued that maintaining stability was more important than promoting democracy , in marked contrast to 2011, when 92% said “living in a democracy” was their biggest wish. Five years since the Arab Spring, when a wave of demonstrations toppled autocratic leaders across the region, youthful optimism continues to deteriorate. Only 36% of the young people surveyed consider the revolutions of 2011 to have had a positive effect , a drop from 72% in 2012.

Egypt is the only country in the MENA region where young people still believe that the Arab world is better as a result of the Arab Spring.

“Many people in the region may reject Daesh due to its extreme tactics, but the issue remains that the group exploits existing problems,” commented Hassan Hassan, resident fellow at the Tahrir Institute for Middle East Policy, on the result of the survey. “It did not simply invent the problems the respondents identified as factors.”

The survey also examined youth perceptions regarding other factors that affect daily life. ”Today’s Arab youth are tomorrow’s leaders, business owners, workers and consumers, and the information in this survey helps all of us to reach and understand this group better,” stated Donald A. Baer, Worldwide Chair and CEO of the PR agency, Asda’a Burson-Marsteller, which is undertaking the Arab Youth Survey for the 8th year running. Its aim is to explore attitudes among the close to 200 million people below the age of 25—an estimated 60% of the Arab population—in order to be able to present evidence-based understandings into the thoughts of Arab youth and, by doing so, provide public and private sector organizations with data and analysis to inform their decision-making and policy formation processes.

For the fifth year in a row, young Arabs consider the United Arab Emirates top of the list of the countries they would want to live in, followed by the United States, Germany, Saudi Arabia, and Canada.

Media consumption was also monitored, and indicates that more young Arabs are getting their news online than from television or print.  “The Arab Youth Survey has shown for some time the growing importance young people in the MENA region attach to social media,” explained Damian Radcliffe, Professor in Journalism at the University of Oregon. “If media companies, businesses and governments in the region are not already embracing social media to reach young people, then the new survey makes a very compelling case for them to do so.” The data showed 32% of young Arabs reading news online daily , 29% watching television news channels daily, and only 7% reading newspapers on a daily basis. “For newspaper publishers, it made for pretty grim reading,” added Radcliffe.
Topics
Social Sustainability and Inclusion
Countries
Algeria
Djibouti
Egypt
Iran
Iraq
Jordan
Kuwait
Lebanon
Libya
Morocco
Oman
Qatar
Saudi Arabia
Syrian Arab Republic
Tunisia
United Arab Emirates
West Bank and Gaza
Yemen
Regions
Middle East and North Africa