Co-authored by Pasquale Steduto, FAO Regional Office for the Near East and North Africa. 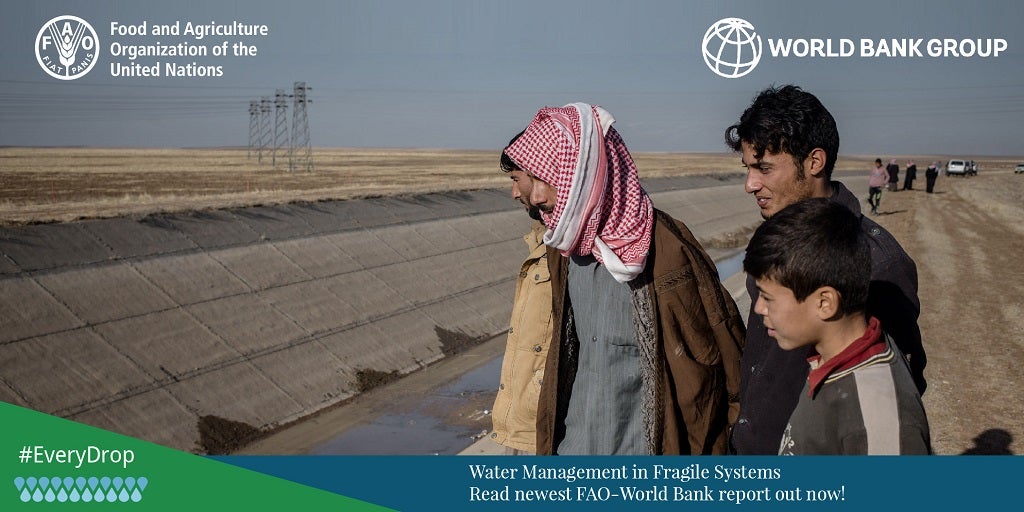 In Gaza, the drinking water tastes like seawater. Years of neglect and poor management, due in large part to recurring conflicts, has led to the steady depletion of Gaza’s natural aquifer. The empty aquifer has been invaded by seawater and, alarming for public health, untreated sewage.

A series of droughts that struck Syria from 2006 onwards destroyed the livelihoods of millions of Syrians who relied on agriculture.  The United Nations (UN) estimated that between 2008 and 2011, the drought affected 1.3 million people, with 800 000 people “severely affected.” People were forced from their land, poverty levels rose, and part of the population was plunged into deep food insecurity.

Neither one of these severe water crises are the cause of the instability that grips both Gaza and Syria. Conflict in Gaza has made a bad situation even worse; preventing the management of a vital natural resource that has led to an environmental disaster. Policies to soften some of the impacts of the drought in Syria could have kept people on their land and kept them from falling into poverty. While neither of these crises are direct causes of conflict, they fuel the frustrations that drive instability.

Water scarcity and instability feed of each other. Water crises strain the ability of individuals and societies to maintain their livelihoods and political stability. Fragile situations – characterized by weak and ineffective institutions, histories of conflict, unsustainable livelihood systems and decaying or damaged infrastructure – act as a multiplier of challenges to sustainable water management. The compounding nature of water and fragility gives rise to a vicious cycle, as pictured below, with each reinforcing the other in a dangerous spiral.

The good news is that this vicious cycle can be broken. It will not be quick, or easy, but actions to preserve and better manage the region’s depleting natural water resources will also contribute to building the foundations for stability. The region’s policy-makers, practitioners, and researcher must focus attention on water’s role as a risk factor in fragile systems, and adopt the policies that convert the management and allocation of water resources into a force that binds societies together. The region’s growing population and rapid urbanization has placed ever greater demand on water, while climate damage is making water scarcity ever more severe. There is no time to waste. 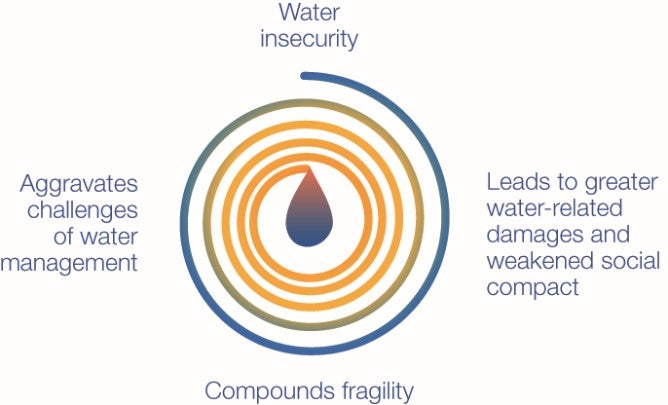 Water security in the region requires going beyond increasing immediate water supplies to a focus on ensuring sustainable resource management, and efficient and affordable service delivery. Such a balanced approach fortifies the ability to withstand shocks and protracted crisis, such as drought, conflict, or a refugee influx, while also addressing immediate needs such as food security.

A recently completed water-treatment plant in norther Gaza, financed by the World Bank, will address the threat to public health from untreated sewage. The treated water will be used to replenish Gaza’s aquifer, and create a water resource for agriculture.

Water management interventions should revolve around increasing incomes, building resilient food systems and strengthening access through markets so that people can obtain safe and nutritious food even if a crisis prevents them from growing enough food by themselves.

In Jordan, the United Nation’s Food and Agriculture Organization (FAO) has supported improving the rural livelihoods of communities that were experiencing environmental and water scarcity problems, through a project aimed at ensuring that small-scale producers, communities, and displaced populations have increased access to agriculture-based livelihoods and employment opportunities. The project has helped to weave the social fabric back together and create a positive relationship between local people and refugees.

As water and agriculture problems are all essentially local, community consultation, participation and ownership are vital, as is working with whatever local government may exist on the ground. In addition, investing in innovative policies and practices will be extremely beneficial. Research, technology development and transfer can provide further improvements to water efficiency and crop productivity in the region. Given the scale and commonality of the challenges of many countries in the region and the transboundary nature of important issues like climate change and shared water resources, collective action and partnerships are essential. Both of which contribute to both local and regional stability.

These links between water management, fragility and conflict are all discussed in the recently launched joint UN’s FAO and World Bank report “Water Management in Fragile Systems”, which discusses how investments in water can be conducive to stability by addressing short-term livelihood needs and long-term sustainability challenges.

Anders Jagerskog is Senior Water Resources Management Specialist at the World Bank and Pasquale Steduto is the Water Scarcity Regional Initiative Delivery Manager and Regional Programmes Coordinator at FAO Regional Office for the Near East and North Africa.