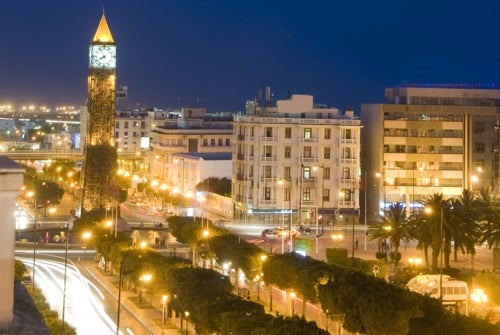 Tunisia faces some tough choices for meeting its future energy needs as the domestic production of gas is expected to start declining by 2020.  Should it import more piped gas from Algeria or liquid natural gas (LNG) from the international market? Should it build an electricity interconnector to Sicily that would enable it to tap into southern Ital‎y’s power surplus? Or should it start importing coal for electricity production?

Tunisia sources approximately 85% of its primary energy needs from domestic oil  and gas resources, and the balance from imported oil and gas.  A significant share of the country’s energy imports is in the form of gas sourced from Algeria, either as a transit fee for gas destined to Italy or as imports. Until the early 2000s, Tunisia was a net energy exporter .  Since then, however, energy demand has grown faster than domestic production, and oil and gas imports have inched upwards.

Projections of energy demand and current supply sources anticipate a shortage of primary energy around 2020. Although there are opportunities for developing new gas fields in Tunisia, those reserves are limited and uncertain.

The growing gap between domestic supply and demand is compounded through the existence of significant energy sector subsidies representing about 5% of GDP in recent years: oil products, natural gas and electricity prices to both industrial and residential end-users are all subsidized. (In 2015, the subsidy dropped significantly as an automatic result of lower oil prices, but it may rise again if the oil price trend changed.) This is a drain on public financial resources and encourages wasteful over consumption, while not predominantly benefiting the poor whose energy consumption is lower than other socio-economic categories. As Tunisia becomes more reliant on energy imports and domestic renewable energy, it will need to move toward cost recovery (while maintaining social tariffs and other safety nets for the poor) so as to encourage more energy efficiency and to prevent the fiscal burden of subsidies from becoming unsustainable. Electricity and natural gas prices will need to rise to cover the cost of more expensive sources of energy, be they imported or domestic. A more financially autonomous sector will also make it easier to attract badly-needed private sector investments.

Meanwhile, Tunisia has significant untapped solar and wind energy generation potential .  Currently, Tunisia has only 3% of its grid capacity supplied by renewable sources , mainly through two wind farms.  The country adopted the Tunisia Solar Plan (TSP) in 2012 to increase the portion of renewable energy on the grid to 30 % by 2030, relying on wind (15%), photovoltaics (10%) and concentrated solar energy (5%).  Tunisia is also focused on increasing energy efficiency over the 2013-2020 period to achieve an average reduction in electricity demand of 1.4% per year compared to a business-as-usual scenario.

In the lead up to the climate conference (COP21) in Paris last year, Tunisia proposed reducing its greenhouse gas emissions across all economic sectors by 41% by 2030, relative to 2010 emissions.  Its mitigation efforts center on the energy sector, which alone accounts for 75% of the anticipated emission reductions.  It is estimated that Tunisia will need $18 billion in new investments to implement these proposed reductions.

While renewable energy can play a vital role in Tunisia’s future energy mix, there is still a need for reliable and constant energy sources to facilitate the transition of the country’s electricity grid to increasing dependence on mostly intermittent renewable sources.  This is made particularly acute by the strong annual increase in electricity demand that Tunisia is expected to experience in the next few years, estimated at 5% annually.  Natural gas is an ideal candidate to provide such reliable energy capacity due to its cost competitiveness and to the flexibility of gas fired power generation technology; but with dwindling domestic gas reserves, Tunisia must balance a number of objectives: (i) minimizing energy costs, (ii) enhancing security of supply and (iii) protecting the environment.

There is some scope for slowing down the drop in domestic gas production and even for tapping into Tunisia’s shale gas potential, though the latter option would take close to a decade to materialize. Tunisia could also increase its piped gas imports from Algeria , particularly given the drop in gas demand in Europe, Algeria’s primary piped gas market.  Tunisia could build LNG regasification and storage infrastructure to import gas from sources other than Algeria; Jordan and Morocco are actively pursuing such an option to address their domestic energy needs.  The international LNG market has experienced a drop in price in recent years, partly linked to the drop in oil prices and partly because of the rise in shale gas production in the US.  The World Bank is currently funding a study of future gas sources in Tunisia that will help the Government make the right strategic choices for this vital industry in 2016.

Without a secure plan to address the supply of natural gas, Tunisia has been considering the introduction of coal for power generation into its energy mix . In recent years, coal prices have been low and global reserves are abundant, which make it a competitive fuel for power generation. However, coal emits at least twice as much carbon into the atmosphere when compared to natural gas.  It also emits other pollutants, such as sulfur and nitrogen oxides, whose mitigation would increase the cost of generation.  Pursuing coal as a primary energy source would naturally go against Tunisia’s climate mitigation targets, and there is likely to be public opposition on environmental grounds.

Perhaps the most appealing short- to medium-term option available to Tunisia is building a submarine transmission link to Italy to tap into Italy’s current large excess gas-fired generation capacity.  The project would entail installing a 192-km cable at a depth of 750 meters to connect northern Tunisia with southern Sicily using proven technology (such subsea interconnectors already exist elsewhere).  This would allow Tunisia to import 600 MW to 1200 MW at a competitive cost from existing gas-fired plants that have been largely idled because of the economic downturn in Europe, in general, and Italy, in particular, in the past few years.  The cable would also complement Tunisia’s gas strategy by offering some choices between importing gas or electricity based on the prevailing prices of both commodities.  The interconnector would also close the high-voltage power transmission loop between the Maghreb and Europe, thereby bringing greater integration and reliability to both grids. (Morocco is already importing 18% of its electricity needs from Spain.)  As economic conditions in Europe improve, Tunisia could use the cable to export solar power into Europe.

Tunisia thus faces some critical choices for meeting its future energy needs in an environmentally and financially sustainable way. There is an important public debate and consultation process in the country about this, as the choices made today will have ripple effects on the development of Tunisia’s energy sector and its economy for years to come.
Topics
Energy
Countries
Tunisia
Regions
Middle East and North Africa Tunisia is marching to stabilize democratic institutions. The biggest challenge to democracy is unemployment. It is estimated that 700.000 young Tunisians are unemployed and restless. They are agitating against the inability of government to provide them jobs. Therefore, energy sector investment strategy should Spell out choices to deliver maximum benefits to Tunisian people through enhanced employment opportunities to Its youth.