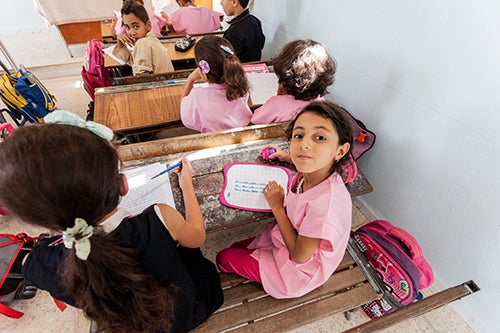 This blog was adapted from the French version originally posted in Huffpost Maghreb.

As one of the forerunners of the World Bank’s new Human Capital Project, Tunisia was one of the six countries that presented their vision for human capital development at the World Bank Annual Meetings held October 10 – 11 in Bali, Indonesia.

We should be proud of Tunisia’s involvement in this great global debate. Nevertheless, Tunisia’s record of performance to date is not unblemished. But the desire to do better is certainly there, reflecting the mindset of Habib Bourguiba, the Father of the Nation, who understood the importance of investing in human capital.

This choice is not an obvious one, as governments and politicians in almost every country have tended to favor the building of roads, dams and power plants over investing in basic education, health and social protection. So, despite the continued fragility of Tunisia’s macroeconomic situation, the Government’s commitment to human capital is a positive sign for its population and for investors.

Tunisia’s human capital development agenda is broad and complex. The ratings from the new Human Capital Index unveiled on October 11 show that the country’s performance has, for the most part, been undermined by three factors: (a) limited access to preschool programs (recognized the world over as the most important programs in the life of a child, and a determining factor for a child’s success in life); (b) an elevated school dropout rate, particularly at the secondary level, and poor learning outcomes as measured in internationally-recognized aggregate tests.

In this blog, I will touch on some of the reforms under way that could lower the school dropout rate and increase the participation of children in preschool programs, that are part of the national multisectoral early childhood development strategy adopted recently by the government. This involves the reform of the social assistance system, whose programs have a poor reputation in Tunisia, in terms of both access and coverage.

The fact is that public expenditure on social assistance has always been weak in comparison to the scale of the subsidies earmarked for energy and commodities. Not only do the most vulnerable populations benefit comparatively less from such subsidy programs than the middle class and the private sector, these programs actually account for up to 10 percent of gross domestic product, leaving little room for financing essential programs that would allow vulnerable families to enroll their children in preschool programs and keep teenagers in secondary school.

What can we do to change this situation? We must first identify the vulnerable families. New technologies and advanced targeting methodologies make it possible to “know the poor.” This targeting approach has been applied with considerable success, first in Latin America, and then in South Asia. Replacing general subsidies with a targeted social assistance program allows for more resources to be transferred to vulnerable families.

The program to identify vulnerable families, the establishment of a data base, and the development of application modules for the social assistance programs (Programme d’aide aux familles nécessiteuses [PNAFN] (Program of Assistance for Families in Need) and Le Programme de carnet de soins à tarifs réduits [AMG II]) (Program for Low-cost Healthcare Cards) are the first elements that must be put in place when implementing a reform program. Despite initial difficulties, this approach has been accepted by public officials and should be completed by the end of 2019.

The next step is to adopt legislation regulating the transition toward a targeting system. Unfortunately, the “Amen” law has not yet been approved by the Assembly of the Representatives of the People (ARP), but it is hoped that this will be completed during the current session of parliament. The “Amen” law is an excellent tool for “enshrining” the transformation of the social protection system in a legal text.

Perhaps the most difficult aspect of the reform program is the expansion of the envelope earmarked for social assistance. This implies a transfer of resources from the middle class and the richest class to the most vulnerable populations, through initiatives to reduce general subsidies and reinvest these resources in strengthened social assistance programs. We recognize the difficulties inherent in such a choice, but it remains necessary and important.

Finally, the implementation of integrated programs for improving access for all segments of the population to good quality basic services will require greater coordination among the different sectors, such as social affairs, health and education. The adoption of such an integrated multisectoral approach will promote inclusion and help combat the intergenerational transmission of poverty.

Tunisia has already made steady progress in two of the four categories that have been identified above as prerequisites for meaningful and bold social protection reform. These first two elements now need to be implemented in full. The third and fourth components have not yet been addressed. It is vital that a discussion on this issue be initiated in the context of the debate on the 2019 Budget Law.

If Tunisia is to strengthen the development of its human capital, it will have to promote inclusion for the (estimated) 900,000 vulnerable families in the country, by affording them access to preschool programs, a quality education system up to the age of 18, and providing them with adequate primary health care and nutrition. Failing this, it will be difficult for Tunisia to improve its Human Capital Index rating between now and the next edition to be released in three years’ time in Marrakech.