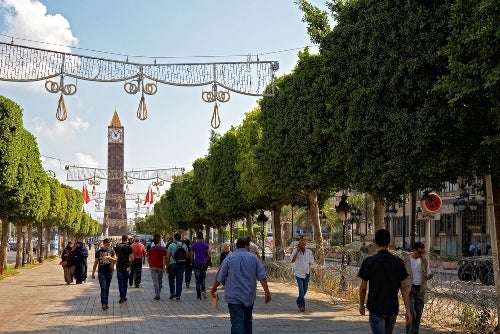 Who would have thought, on January 14th 2011, when the Tunisian people took to the streets shouting “Degage!”  or “Get out!” to former dictator Ben Ali’s regime, that they put  in motion a series of events that would lead to a group civil society organizations  winning  the  Nobel Peace Prize four years later. It has been a rocky path, with lives lost and fraught with political tensions that threatened to degenerate into even greater violence. Yet, Tunisian civil society stuck to the principles of democracy and were instrumental in leading the country to choosing compromise over conflict.

Tunisians, the instigators of the “Jasmin Revolution” showed the world both sides of their resilience: first in weathering the Ben-Ali regime from 1987 to 2010, and then emerging to fight for “Bread, Freedom and Social Dignity” as the protestors chanted in 2011. Out of the three key themes of this famous slogan, ‘Freedom’ is the greatest achievement that Tunisian civil society has managed to consolidate. While unemployment remains high, especially among young people, and there is still widespread social exclusion in Tunisia’s lagging regions, both “Work” (referred to by “Bread”) and “Social Dignity” were enshrined in Tunisia’s new constitution.

Civil society played an especially important role in the drafting of the new constitution. Ever vigilant and tireless in its lobbying during the drafting process, civil society contributed session by session, article by article never letting down its guard. Extensive deliberations were held especially around the topics related to the national identity of the country, the role of religion, the definition of rights and freedoms and the equality between men and women.

Over 6,000 citizens, 300 civil society organizations and 320 university representatives provided input to a nationwide dialogue on the new constitution. In a sign of the consensus achieved in the final document, the constitution was eventually approved by an overwhelming 200 of Tunisia’s 216 National Constituent Assembly members.  Along with the constitution, civil society groups also lobbied for and contributed to critical new laws on the right to associate and access to information. Civil society groups have also partnered with international development organizations on projects ranging from the development of job skills among young people and improving service delivery in lagging regions; making another contribution to social stability.

During those often turbulent times, civil society resorted to a variety of always peaceful strategies to keep its demands front and center. These included fierce debates and discussions on various networks and national television channels. Proactive engagement on social networks to raise awareness and gather support. Organization of peaceful demonstrations and marches to reinforce popular demands. Reaching out to political parties and key decision makers to incorporate constructive criticism in key milestones of the constitution. And reaching out to public institutions and government to form solid partnerships for development.

But civil society was not alone on the bumpy learning curve in the new Tunisian democracy. The political front was facing significant difficulties in its post-revolutionary management of the nation, amidst strong political struggles for power. Meanwhile the people’s resentment over unfulfilled expectations was growing. This situation inevitably led to mounting social discontent, violent clashes and ultimately the assassination of two opposition political leaders.

This dynamic, unlike in other neighboring and regional countries, did not lead to civil unrest or worse to civil war. It was halted by the launch of a National Dialogue and the signing of the Social Pact in 2013 between the Labor Union (UGTT), the Tunisian Trade, Industry and Handicrafts Union (UTICA), the Tunisian Human Rights League and the Order of Lawyer’s – the now famous Nobel Peace Prize winning Quartet. They committed, in collaboration with the government (under the Islamist party, Ennahdha), civil society and the opposition political parties, to work together for the socio-economic reforms and transformation needed to guarantee peace and stability for the period 2012-2020. The pact covers many points, including the importance of social dialogue as a genuine pillar of a democratic transition towards greater social justice. The agreement allowed for the resumption of work on the drafting of the new constitution, as well as to the voluntary departure of Ennahdha from power and the nomination of a new technocratic government which organized the 2014 presidential elections. .

The consensus that was reached has been holding and continues to keep the transition on track, despite a difficult security environment and the slow process of translating political achievements into a new economic model that provides benefits for the many rather than the few. The Nobel Peace Prize comes at a crucial time, reviving Tunisians’ ardor for a better future with promising opportunities of shared prosperity.  The Nobel Prize symbolizes an extraordinary recognition of the achievements of all Tunisians. Even in the face of the hardships, Tunisia remained committed to a peaceful path toward the realization of the demands of the Tunisian revolution, in both the political and now socio-economic transitions. It brings a message of hope, unity, encouragement and pride as Tunisia moves beyond its political transition, and underscores the central role of civil society as a full development partner, in answer to the original call for “Social Dignity”.