Unfinished journeys: Helen Zughaib captures the aftermath of the Arab Spring in her art

The silence of the night whispers to her its secrets…

She picks up the bodies of children, drowned in the Mediterranean Sea, buried in the snow, shattered by bombs, exploited, trafficked in parts or whole depending on the whims of the sharks….

Mixing the colors of the rainbow with tears of loss and tragedy, she paints their absence in her artwork and with her brush, she confronts complex and intertwined developmental issues.

According to a World Bank study, the current violence in the Middle East and North Africa Region led to fifteen million people fleeing their homes, giving rise to the biggest refugee crisis since World War II. Many sought refuge in neighboring countries that are economically fragile, further complicating the tragedy. Women and children bear the brunt of war and this is what Helen Zughaib aimed to capture in her paintings.

The World Bank Art Program, in partnership with the Office of the Vice President for the Middle East and North Africa Region, organized an exhibition of the works of artist Helen Zughaib, titled: The Arab Spring - Unfinished Journeys, that were on view in the main building of the World Bank’s Washington headquarters from January 18 to February 16. The theme of Helen’s work depicts the sense of hope and dignity that prevailed when the Arab Spring began, only to dissipate soon after with the horrors of war and forced migration. 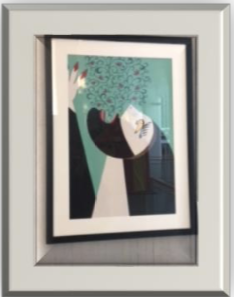 On this occasion, an artist-curator talk took place on Tuesday, February 6, in which the artist explored the nuanced themes she sought to portray. Juliana Biondo of the World Bank Art Program shared her insights and guided the discussion. Guests in the audience, inspired by the exhibition, recalled comparable stories …No walls can be built around the hearts when there is shared suffering…

After the Arab Spring, how could the longing for freedom, peace and justice go so wrong?

The artist hints to the answer… perhaps the absurd stark contrast between the beauty of her art, and the darkness of reality suffices for the message to be heard. Most of her work is done in gouache that creates vibrant and luminous colors to fill the ever-increasing emptiness. “I am a painter, but the tragedy is overwhelming,” she says, referring to the installations she made, using mixed media.

“I speak in the voice of women and children who have no voice,” the innocent victims of violence and forced displacement. “It is only by chance that a baby is born there and not in any other safe place, deprived from redeeming his childhood. How can I forget? ‘Oh, the places you will go’ by Dr. Seuss. What places are these children going to?” 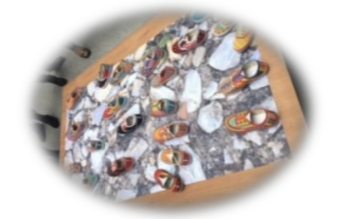 Many pieces in Helen’s Arab Spring/Unfinished Journeys series reflect women’s issues, often through images of one woman, at the time when the suffering and death of children is hinted at through various installations: a playful tent that invites them to play remains void of their laughter; small, colorful and unmatched shoes are all that is left behind.

Her three-part Chiclets installation depicts the vulnerability of refugee children, and all children in developing countries. Forced to make a living on the merciless streets by selling chiclets, they are beaten, exposed to the elements and the whims of those they answer to, and trafficked. The focus on one little girl’s face exposes the complexity and inhumaneness of the situation and highlights deep development issues such as violence against women and children, child labor, exploitation of the vulnerable and marginalized refugees, and other issues at the core of the World Bank mission. 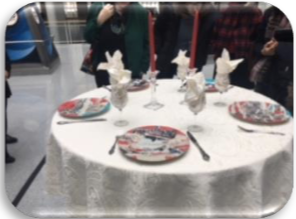 Another installation portrays a fancy dining table, its ambiance shocking… Whereas the tablecloth, the candlesticks and napkins are elegant, the painted ceramic plates include newspaper collages of recent tragedies. “I write down the number of people who are dying, so we do not become immune to the unfolding tragedies amid normalcy,” said the artist.

The women in her series dressed in abayas, black, embroidered with flowers, layered with Arabic script or news clippings, reveal the situation of women in the MENA region. They seem to stare back at the audience, perhaps with the question: “Where have you been through all this”? In Helen’s painting: “Arab Spring Exodus, 2013”, the woman’s neck and head are bent back in agony, but her screams turn into an intricate vine of flowers. Trapped, restricted and forgotten, or like the sphinx, unbroken and continuously emerging?

One question lingers: What are the Unfinished Journeys going to be in the aftermath of the Arab Spring? A further descent into the swamps, or a rise from the ashes?
Topics
Fragility Conflict and Violence
Disaster Risk Management
Gender
Regions
Middle East and North Africa An outstanding review. Aida Haddad explores the essence of Zughaib's work, and sheds an empathetic and humane light on the victims whose suffering defies hope and dignity.