It had rained a couple of days ago. Our footsteps almost float on soil that feels soft, almost spongy. We see footprints of wolves that roam the lands at night. The sun is low in the sky, and a slight breeze wafts all around us. There is serenity in the air, as if history itself is imprinted in the consciousness of this land. This is Uruk, some 300 kilometers south of Baghdad, and some 7,000 years from the start of civilization.

Last year in May, I authored a blog about the Iraq Social Fund for Development (SFD) project. I wrote about Iraq’s glorious history, its abundant natural

resources, its profound cultural heritage, and its vast human capital. I wrote about the cradle of civilization and the great rivers, embodied by the city of Uruk, one of the earliest urban centers in civilization, which many believe lent its name to modern day “Iraq”. I also wrote of the deep challenges that are facing the people of Iraq. Successive years of conflict, violence and displacement have significantly eroded or destroyed much of what the people of this land have built. Today, I write about the promise of history, the optimism of the present, and the potential for a more promising future.

In December 2017, I was part of a team from the World Bank social protection global practice that visited the Governorate of Muthanna, one of Iraq’s largest governorates by land size, with the country’s highest poverty rate (estimated at 52.5 percent in 2012). We met with governorate officials at all levels, and had frank discussions on the challenges facing people in Muthanna. These included the high poverty rates, high unemployment (particularly amongst youth and women), poor health and education outcomes, and significant decline in agricultural production, amongst other challenges. 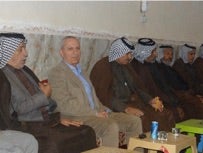 We also witnessed much of this in our visit to the village of Al-Dhail, which is only a few kilometers away from Uruk. Al-Dhail is made up of some 500 households, who have traditionally depended on agriculture as their main source of economic activity. This, however, has dwindled significantly in recent years. The flow of the mighty Euphrates has all but become a trickle, bringing with it high levels of soil salinity. Schools are congested, with an average of 60 students per classroom in the only two elementary schools. There are few accessible health centers, and running water is sporadic. Here too, unemployment is high, as young people have turned to public sector employment which is no longer viable. Female employment is practically non-existent due to a combination of lack of opportunities, legal restrictions, and prevailing social norms. Yet, as we spoke to community leaders in Al-Dhail, and particularly to women groups, we witnessed a ground swell of optimism, as they see an Iraq that is emerging from years of conflict, an Iraq that has defeated ISIS and liberated its land.

Local communities were eager to come together, to assess their collective needs, and to begin their plans for undertaking social and economic development that is relevant to their community. They felt that the SFD project would allow them to make decisions, and that the government can now finally bring them resources to bring back the glories of the past. Thus begins the process of rebuilding trust between citizen and state, which is vital for renewing the social contract.

As we later walked through the city of Uruk, we could all feel the weight of history and responsibility that is upon us now in Iraq. We saw the walls that are still standing 7,000 years later. We saw the remains of the parlors that were roamed by King Gilgamesh himself. In the famous Epic of Gilgamesh, the King seeks the secret of eternal life, only to discover that eternal life is achieved by leaving a legacy of development behind. A legacy we all endeavor to achieve in our work at the World Bank.
Topics
Agriculture and Food
Fragility Conflict and Violence
Gender
Social Sustainability and Inclusion
Urban Development
Countries
Iraq
Regions
Middle East and North Africa Very nicely written, linking past with the present and future. Iraq deserves all our love, dedication and loyalty.
My best wishes for all success.

Thank you Ghassan for the hearted testimony. Of course, Iraq has cradled almost all civilizations, and has been there gloriously for over 7M years. Countries with such history track will remain no matter what.

Thank you dear Lina for the kind words. Indeed, we are very optimistic for the future of Iraq and the region.