What Next for Yemeni Women After the National Dialogue? 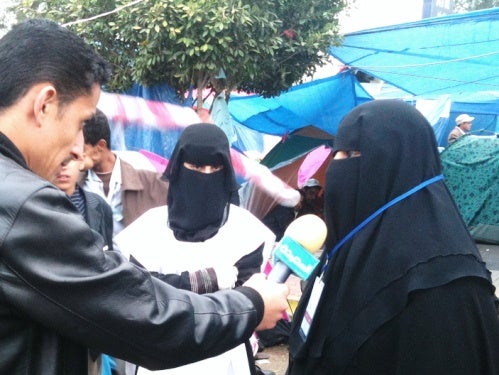 There have been a regular series of meetings in Yemen that gather together women from all walks of life, female politicians, civil servants, current and former cabinet ministers, parliamentarians, lawyers, and representatives of the civil society. I had the chance to attend several of these meetings, as did women from the international community, either female ambassadors or representatives of donor organizations.

During the National Dialogue Conference (NDC), women worked hard to convene as many of these sessions as possible. The meetings constituted a forum for discussing and evaluating the specific political, economic, legal, and social issues that related to women. The active participation of large numbers of women in these sessions and their presence in the different conferences of the NDC, where women represented 27 percent of the total membership, was certainly a helpful factor in sending a strong message to Yemeni men. Beyond the NDC, women were ready to participate fully in the political life of the country; especially as they represent 51 percent of the population. Through these meetings, Yemeni women proved that they are capable of handling the responsibility of rebuilding their country.

These sessions helped me get acquainted with many women activists. It was rare to have so many activists under one roof. We exchanged views on politics and the role of political parties, views that no doubt had played an effective role in building consensus of different parties, and were at the core of the recommendations of the National Dialogue. The debate was often heated, with different views and ideas, and sometimes political quarrels trumped dialogue, breaking up the session. At times like these, I used to think that women had to focus on the economic dimension, and the challenge of creating jobs. This pivotal need is one of the most important during these hard times Yemen is undergoing. This is especially true in view of the increasing numbers of university and technical institutes’ graduates who find no support and little demand for their skills, in the public and private sectors alike, and solutions to these problems can be discussed with utmost neutrality!

The NDC witnessed an unprecedented and relentless struggle by women. Women proved for the first time that they can win long-fought-for causes. Most important of all was the constitutional guarantee of their right to take part in public affairs. Most participants agreed on the need to set forth a specific percentage for the participation of women in all branches of government: legislative, executive, and judicial; in addition to elected local councils. Based on this common agreement, the NDC recommended the following: “Political parties shall be required to prioritize their election lists in an order that guarantees women representation of no less than 30 percent of elected councils. The order of enlisting men and women candidates on electoral lists shall be as follows: At least one woman among each three candidates. Political parties’ lists in violation of this law shall not be accepted.”

Women currently have very low representation throughout all levels of government. It is clear that many male decision makers still have a very restricted view of women, believing their roles should be confined to the household. That view is still prevalent despite the fact that Yemeni women are almost equal with men in terms of educational attainment. Today, they are clearly capable of handling positions of responsibility, when given the opportunity. But as one woman activist put it: “Political parties and higher institutions are not convinced that women should represent 30 percent of elected councils. They will not implement the law, and will resort to tricks. The most glaring evidence is the nominations to the Regional Committee, where women represent less than 7 percent!”

Naming candidates for membership in the Constitution Drafting Committee is expected soon, and many women do not have high hopes, but are lobbying to enlist the support of men to help amplify their voices, hoping this will have a greater impact. Maybe someone will listen and respond positively.

Recently I had the chance to be among a group of distinguished women and young women who had waged numerous battles to ensure women were being heard in both the NDC and elsewhere. They were optimistic and believed in the sincerity of the political decision to give women the place they deserve and the opportunity to build and work for positive change. As one woman commented: “Yemeni men would accept a higher than 30 percent female representation in Parliament, if elected women don’t voice any concerns and simply nod their heads in approval!!!”

Finally, as experience has shown all over the world, women will not achieve any progress without relentless work and continuous effort on all levels. Yemeni women of all ages have shown their readiness to work for preserving their hard won gains. They were ready to demonstrate in the street and participate fully in the NDC – the success of which was an example not only for the Arabian Peninsula, but for the whole world.