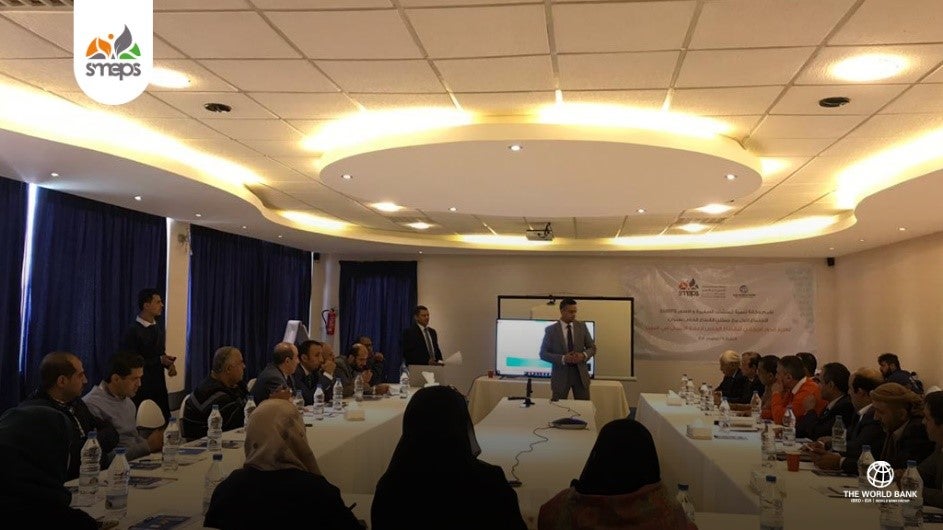 Since 2015, the Republic of Yemen has been overtaken by a brutal conflict that has resulted in massive casualties, hundreds of thousands of internally displaced families, substantial infrastructure damage, and hampered service delivery across both the economy and society. In total, according to the 2018 Humanitarian Needs Overview from the United Nations Office for the Coordination of Humanitarian Affairs, approximately 22.2 million people, roughly 75% of the population, are in need of some manner of humanitarian or protection assistance.

As such, the conflict has also taken a heavy toll on local businesses. The preliminary findings of a recent survey conducted by the World Bank in October 2018 shows that around 35% of businesses in the country have closed, and over 51% of surviving firms have experienced a shrinkage in size and a scaling down of operations. Around 73% of closed firms cited security and financial constraints as the main reason for closure, with financial constraints, the increase of input costs, and the loss of demand and customer base as the main reasons for the change in many firms’ size.

Against this troubling backdrop, on November 29, private sector representatives from all across Yemen and the greater MENA region held a workshop to discuss the private sector’s role in supporting humanitarian and recovery efforts in the country.  Despite the circumstances, this meeting proved a success, representing the first time in three years that the Yemeni private sector organized an event bringing together federations, chambers, sector associations, business diaspora organizations, as well as national business support institutions in the service of Yemen’s future.

While many representatives were physically present at the meeting in Sana’a, other representatives connected via video conference from the Yemeni cities of Hodeida, Aden, and Mukalla, as well as internationally from Amman, Dubai, and Istanbul. The meeting was organized by the Small and Micro Enterprise Promotion Service agency (SMEPS), with funding from the World Bank Bringing Back Business (BBB) Project.

Seeking to play a role in improving the dire situation of the country, the gathering laid the groundwork for practical and thought leadership on the role of the private sector in future Yemen recovery and reconstruction efforts. More specifically, the workshop resulted in participants identifying two key pillars aimed towards increasing the participation of the sector in future humanitarian and reconstruction efforts in partnership with the government and donor agencies:

Pillar I: Establishing a Private Sector Cluster. There was a majority consensus among participants for the need to establish an inclusive private sector cluster that acts and advocates for Yemeni businesses, as well shares its views on issues affecting its sector performance and active participation. A key point was the need for partnership with government authorities beyond tax collection, such as decision-making planning and service delivery. The cluster is envisioned to be a single, unified voice of the Yemeni private sector, combining the efforts of all sector actors to both support recovery and act as a coordination platform enabling these bodies to collaborate effectively with government and donor agencies.

Prior to this, the private sector voice had been scattered, resulting in both a loss of convening power and a weakened position to support the sector. The establishment of this cluster would address this gap and the next couple of months would change the status quo and enable more effective advocacy, participation, and coordination of the sector with other stakeholders.

Pillar II: Increasing private sector participation in humanitarian efforts during conflict and in the identification of business opportunities during reconstruction and recovery. During the meeting, the participants conveyed their full commitment to support humanitarian efforts and help ease the suffering of the Yemeni people. Despite the conflict’s challenges, the sector continued to provide jobs and income to support livelihoods and played a critical role in sustaining the level of essential imports that support livelihoods and contribute to preventing famine conditions in the country. In spite of the hardships that they face, the representatives are committed to continuing to fulfil this supportive role.

In addition, the private sector agreed to develop a set of actions and recommendations under the pillar to be discussed with other stakeholders. Over the next couple of months, the sector plans to: The above areas are crucial and demonstrate the clarity of vision within the sector and its understanding of the important role it plays in all aspects of recovery and development. Regarding next steps, over the next few weeks, a summary briefing paper of this meeting will be finalized and shared with the Yemeni government and donors. The follow up meeting at which the formation of the cluster is anticipated to be announced is planned for January 2019 in Amman.

The aforementioned steps taken by the sector and its commitment to the two pillars will encourage Yemeni capital to work in the country to help recovery efforts and provide a glimmer of hope. After all, there is much to be gained by this unity and much loss of capital without these efforts.