At the Africa Carbon Forum in Namibia: Finding a Voice 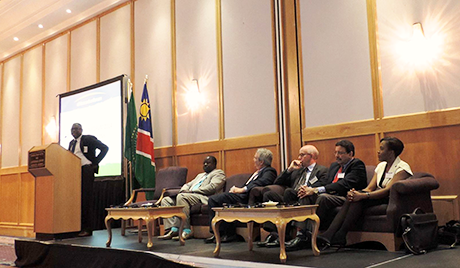 Someone once told me that all it takes is that first visit: once you have the dust of Africa on your feet, it will pull you back, again and again. This was before I knew that I would one day be part of the team leading delivery of the annual Africa Carbon Forum.

And so, it has come to pass: every year, and this was the sixth edition, the forum pulls its stakeholders together to build capacity on issues of climate change, and to help raise a voice for Africa on issues like the UN climate negotiations or policy discussions on the revision of the UN’s Clean Development Mechanism (CDM).

Since it was established, the Africa Carbon Forum has grown into what is often described as the leading event in Africa for players in energy and carbon markets. In the last four years, we have met in Marrakech, in Addis Ababa, in Abidjan, and now in beautiful Windhoek, where the splendid weather last week reminded me of just what we stand to lose if our mitigation efforts are not successful. I was not as fortunate, but a wonder-struck colleague spoke about the family of cheetahs that ran past the car as he drove in from the airport. Are we one of the last generations that will see these beautiful creatures in the wild because their habitat will change due to new climate patterns?

At the Forum's opening plenary (pdf), the Namibian Minister for Environment and Tourism, the Honorable Uahekua Herunga, urged us to work together to make carbon markets work for Africa and prepare the continent for future carbon trading. But, he insisted that developed countries need to act first and that mitigation actions should be taken within the UN’s Framework Convention on Climate Change (UNFCCC). He asked that the forum sends a powerful message from Africa to the 2015 UN climate meeting in Paris about mitigation opportunities in Africa.

These messages are not new, but they still resonate. What was clearly different this year was the sense of urgency around reaching an agreement by Paris. In my remarks to the forum, I highlighted three more messages:

There is now sizable momentum on these issues: both John Kilani of UNFCCC and Dirk Forrister of IETA reiterated the need for putting a price on carbon. In fact, Dirk exhorted private participants to demonstrate their support by signing up in support of a carbon pricing statement on the Bank's website.

Participants in this year’s event considered, in addition to the CDM, a range of ways that countries and multilateral development banks intend to target their climate change investments, such as through approved Nationally Appropriate Mitigation Actions and through funds like the World Bank’s Carbon Initiative for Development, which uses the CDM’s monitoring, reporting and verification features to ensure results from household energy-access projects in least developed countries. They also looked at what could be the architecture of future Intended Nationally Determined Contributions, or INDCs, which will spell out the degree of ambition for mitigation activities that developing countries will commit to the global effort. They looked at sectoral engagements, and struggled to understand how the private sector could be brought in to finance climate-related programs in sectors such as energy at scale, in an environment where collateral is hard to come by and financial sophistication is still incipient.

When we spoke to climate agency officials from various countries, the growing maturity of climate policy practitioners was obvious: they want the Nairobi Framework (under which we partner with UN agencies to deliver the forum) to continue to bring them together in a learning space. But, the forum participants are no longer satisfied with generic "African" analytics: they want specific, customized knowledge that they can use at the national level. They want to be able to talk to their finance and planning officials.

Later in the technical sessions, we sensed the same palpable thirst for knowledge from the participants. They filled the rooms, listening with great concentration, and loading their androids with snapshots of data. Some of the presentations they made were world-class; a forester from Zambia made what I consider to be one of the most comprehensive explanations of landscape and forest issues that I have seen in a long time. Colleagues who were there will testify to this.

Expectations are high, these countries are looking to be heard, and they need us to be there for them. The Hon. Minister even suggested to me that I had to let the dust of Africa on my feet keep pulling me back for as long as we were needed. We now need to live up to their expectations.