Looking through the window of opportunity and seeing gender equality 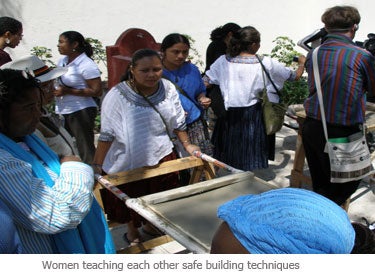 Within the disaster risk management community, we often speak about the window of opportunity that opens after a natural catastrophe. This is an opportunity to do things differently, going forward. The idea is that while devastating, the disaster brings a momentary period of raised awareness of risk, monetary resources, and both a real and metaphorical blank slate upon which people can build more resilient communities or initiate social changes on issues that may not advance during “normal” times.

After Hurricane Mitch devastated Central America, there were resounding calls for “transformation, not reconstruction.” We heard about “building back better” after the Indian Ocean tsunami, and the “peace dividend” that the tsunami brought to Aceh after decades of fighting between the Government of Indonesia and the Free Aceh Movement (GAM).

Experience has taught us that this window of opportunity is not a given and must be managed carefully. For example, the pressures to get people out of tents and back into houses, or to spend donor money quickly, often trumps the need to ensure quality in construction or adequate engagement of communities to ensure sustainability. Most would agree that Central America has yet to be transformed, and that the tsunami failed to deliver a peace dividend in Sri Lanka.

A key area, however, where much progress has been made after disasters is gender equity. Practical steps to promote gender equality can often be integrated easily and speedily in the recovery process. These include issuing deeds for newly constructed houses in both the woman’s and man’s names, including women in housing design as well as construction, and promoting land rights for women. Other steps include building non-traditional skills through income-generation projects, distributing relief through women, and funding women’s groups to monitor disaster recovery projects.

I had the opportunity to support the networking and knowledge sharing of grassroots women leaders as a founder and later as head of the ProVention Consortium from 2000-2010. ProVention is a multi-stakeholder network established by the World Bank to promote innovative thinking and collaboration focused on integrating disaster risk reduction into development efforts. Through ProVention, we supported the efforts of partners such as GROOTS International and the Huairou Commission, who for years have been connecting grassroots women globally to give voice and power to their visions and initiatives on sustainable development.

These include groups such as the Comité de Emergencia 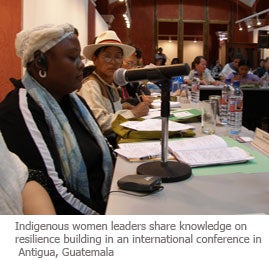 Garifuna of Honduras, which began by organizing emergency relief after Hurricane Mitch and went on to reduce the impact of future hazard events and climate change of affected communities. After the hurricane, the Comité mobilized affected Garifuna communities to reconstruct in ways that addressed long-term food security, cultural heritage and environmental protection of the Garifuna people. They acquired land for rebuilding, built and repaired homes, community centers, schools and businesses, and worked to promote the recovery of traditional agriculture and fishing methods.

The experiences of grassroots women leading disaster recovery efforts has grown to include their engagement with local, national and regional authorities to inform the development of policies and programs that support pro-poor, community-driven resilience building.

On a recent trip to Peru, I met with women from a network of grassroots organizations working on resilience building in the slums of Lima who are partnering with the National Institute for Civil Protection (INDECI) to inform their efforts and formalize the role of grassroots community leaders in the national dialogue.

At the global level, grassroots women are organizing under the Community Practitioners’ Platform for Resilience (CPPR). Endorsed by the United Nations International Strategy for Disaster Reduction (UNISDR) in 2010, the CPPR aims to demonstrate, teach, and build alliances with governments and development institutions and take strategic policy and program action to promote pro-poor, resilient development.

All of these efforts grew out of the lived experiences of women in poor communities that were hit by disasters and who organized to take charge of their recovery and development paths. The window of opportunity opened. While it was seized upon for their basic survival, it resulted in long-term, positive social transformation.

Climate change, perhaps the mother of all disasters, provides the mother of all windows of opportunity for positive social transformation. The briefing note on Gender and Climate Change: Three Things You Should Know echoes the benefits of empowering women as climate and disaster risk management champions mentioned above.  It documents the impact that women’s leadership can have on building climate resilience and promoting low-emissions development pathways. Women and grassroots community leaders need to be engaged as active agents of resilience building rather than passive recipients of adaptation support.