Giving agriculture a voice in the climate change negotiations 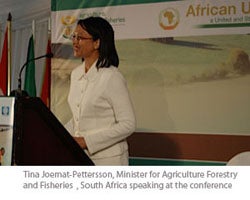 If anyone can do it she can.

Tina Joemat-Pettersson, Minister for Agriculture Forestry and Fisheries is an energetic member of the South African government and a dynamic, passionate advocate for agriculture. She is determined to put agriculture on the agenda of the UNFCCC’s COP 17 taking place in Durban in later this year. She brings so much energy and enthusiasm to the cause, you would think she could do it alone. Luckily she won’t have to.

Every day that passes, the Minister is persuading others to join her campaign to give agriculture a voice in the climate change negotiations.

In Johannesburg this week, at Minister Joemat-Pettersson’s initiative, her Ministry, together with the African Union, hosted an African Ministerial Conference on Climate-Smart Agriculture that was supported by FAO, and the World Bank. African Ministers of Agriculture and their delegates from 21 countries joined scientific experts, civil society representatives, researchers and colleagues from multilateral organizations. The meeting was focused on sharing leadership perspectives, exploring challenges and grasping new opportunities for climate-smart agriculture.

As the international community considers the challenge of feeding over 9 billion people by 2050, in a world of increasing land and water scarcity and erratic weather patterns, climate-smart agriculture - an approach that offers triple wins of enhancing productivity, resilience and carbon sequestration - is attracting increased attention.

Minister Joemat-Pettersson’s opening remarks highlighted the importance of agriculture to Africa and the great challenge of achieving food security or eradicating poverty. She argued for inclusion of agriculture in the main text of the climate change agreements and the importance of establishing an agriculture work program informed by traditional knowledge and science that covers adaptation and mitigation.

In her keynote address, Maite Nkoana-Mashabane, South Africa’s Minister of International Relations and Cooperation and President of COP 17 responded “ I promise you, that you will get more than one sentence in the outcome document.”

The fundamental importance of agriculture to Africa was the theme of every country’s intervention. It is a critical sector, contributing 20, 30, and even 60% of GDP for some countries, engaging up to 70% of their work force, dominating economies and driving growth. And the fundamental vulnerability of the sector to climate change was obvious to all.

Minister Nkoana-Mashabane was the first of many Ministers to speak of the realization that climate change is no longer speculation but is a reality that African farmers face every day. Increasingly erratic rainfall patterns, floods, droughts and according to one delegate “the end of seasons” is being experienced across the continent.

Today in Africa, 650 million people can be considered at risk. They are dependent on rain fed agriculture in fragile environments that are vulnerable to water scarcity and environmental degradation. And yet population projections suggest that the food security challenges will be even greater going forward. 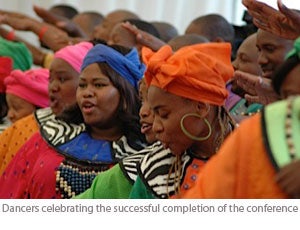 As Andrew Steer, Special Envoy on Climate Change said: “to feed the growing African population by 2050, food production in Africa will need to triple”. Speaking at the opening ceremony of the conference he said, “It is hard to imagine that there can be a more important meeting at a more critical time than this. We must find a way to do things differently.”

Delegates agreed that business as usual is not enough. Food security, poverty and climate change are closely linked and cannot be considered separately. An integrated approach to developing climate smart solutions is critical.

And most importantly, delegates agreed we must get from nothing to something in the climate change text.

At the close of the conference representatives of countries, issued the Johannesburg Communique, with a call for support for climate –smart agriculture through existing mechanisms, early action programs and an Investment Platform to be launched at Durban. The Communique calls on COP 17 to establish an agriculture Program of Work that covers adaptation and mitigation.

The Communique will continue to be discussed by Ministers and negotiators across Africa, but it is a remarkable step on a journey towards recognition of the importance of climate-smart agriculture for Africa and the globe.

Minister Joemat-Pettersson has much to be proud of.