Island gathering highlights the many ways of seeing REDD 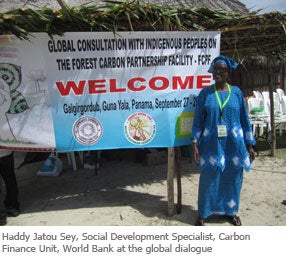 This past September, we were invited to an unusual event with Indigenous Peoples in the territory of Guna Yala on Panama’s Caribbean coastline recently. A dozen representatives of the World Bank, including the Forest Carbon Partnership Facility (FCPF) secretariat, met up on the tiny island of Gaigirgordub, which is part of the San Blas archipelago.

These islands are specks of land no more than two feet above the water line, surrounded by crystal clear waters, and the verdant mountains of the mainland on the horizon. The Guna people become islanders because of a conflict a century or so ago, but they have not lost their attachment to their forests. You just have to look at the landscape as you drive through Guna Yala to see how dense the forests are, in stark contrast to their adjacent province of Panama, where agriculture and urban expansion have taken their toll. So what better place than Guna Yala to talk about the role of Indigenous Peoples in REDD+ (the acronym for reducing emissions from deforestation and forest degradation, and conservation of forest carbon stocks)?When REDD+ was first conceived in 2005, most Indigenous Peoples were alarmed that it might make them more vulnerable, in particular by pushing them off their lands. They called for recognition of their rights before implementing REDD+. Since then, Indigenous Peoples have become heavily involved in international climate negotiations and often participate in events like the national delegations to the United Nations Conference of the Parties. The Cancun Agreements adopted in December 2010 explicitly recognize the need to respect their knowledge and rights, together with those of local communities. The Cancun safeguards also mandate the full and effective participation of Indigenous Peoples and local communities.

The Guna Yala dialogue in September brought together representatives of Indigenous Peoples from Africa, Asia, Latin America and the Pacific, civil society, members of the FCPF Participants Committee (the governing body of the FCPF), and from international organizations, including the World Bank, which is the secretariat, trustee and one of the implementing partners for the FCPF. For three days we discussed the relationships between Indigenous Peoples and the FCPF and how the FCPF will apply the Cancun safeguards on REDD+ and Indigenous Peoples.

No matter which region Indigenous Peoples came from, common questions arose, such as how do we ensure that REDD+ does not undermine customary rights to land and natural resources? How do we incorporate Indigenous Peoples’ traditional knowledge in the design and implementation of REDD+? And how to design benefit-sharing systems so that Indigenous Peoples can benefit from REDD+ on their own terms?

Onel Masardule, a Panamanian Guna representative and a member of the Indigenous Peoples’ Steering Committee in charge of organizing the dialogue, said that the event gave Indigenous Peoples the chance to exchange experiences across countries and regions, and allowed them to develop partnerships that will help them present their proposals on REDD+ as a group.

The Action Plan generated by the dialogue contained some very important recommendations. A number of them were already acted upon at the meeting of the FCPF Participants Committee on October 18-19 in Berlin. For example, a total of $5.5 million additional funding was allocated to boost the FCPF Indigenous Peoples’ capacity building. And it was agreed that more direct dialogues like the one in Guna Yala would be organized.

While the Gaigirgordub dialogue had some tense moments, it was productive and it allowed for a better understanding of the respective positions, expectations and constraints. This direct conversation demonstrated that people can come together in good faith and seek practical solutions to address problems that are real and the product of a long history. 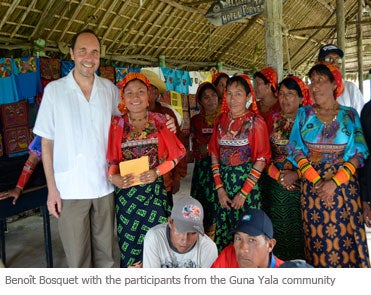 The report of Yala meeting sounds positive on the initiative action of REDD program to reach the island countries. We at Clean Planet Technology Initiatives for Sustainable Development have worked out technology solutions to improve REDD goals in islands.The fundamental issues to be solved are- 1] provision of fresh water resources by way of rain water harvesting systems on land as well as on sea harvesting & storage systems,2] Fire wood abatement for burning domestic & industrial uses which can be substituted by electricity3]Provision of safer & energy efficient homes by electricity & Sustainable Resources utilization& Means of electricity production without burning any matter. We could work out & technologically support island countries by way of clearance of the above said areas based upon the interests & collective inclination of island nations. Technologies play vital role in successful implementations just next to funds deployments.
Prof. Subramaiam Udhayamarthandan
India