It takes all of us: Stretching the space for political agreement on climate action 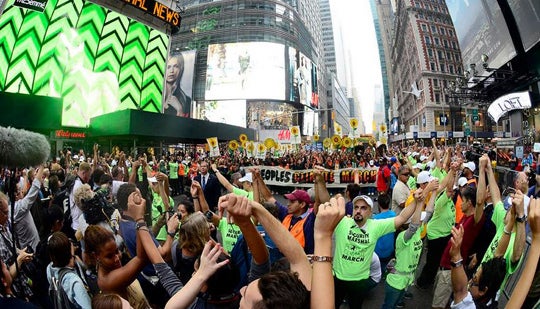 The rising level of anticipation around the UN Secretary-General’s call for climate leadership has been palpable over the past few weeks, and especially so here in New York at the People's Climate March today, with Climate Week about to start and the UN Climate Leadership Summit just two days away.

At the World Bank Group, we have been fielding calls from our clients – companies and countries – who are asking for support and wanting to know how they can engage on the different climate initiatives that are coming together across all sectors of the economy.

Standing in my daughter’s school yard talking to other parents last week, we discovered that many of us would be joining the march. In our family’s religious community, buses were organized and rooms offered to those headed to New York to add their voices to the call for action. New York is just one location – the march organizers are talking about more than 150 other climate action events around the world.

Before stepping off, let me try to lay out how I believe this Summit can help spur action and achieve the speed and scale of action we need.

1. The Summit can stretch the zone of possible agreement

In negotiation theory, with interest-based negotiations, there is a concept of a zone of possible agreement. The Summit can help expand the political space and stretch that zone.

At the Summit, we will see an extraordinary array of concrete actions stemming from partnerships – coalitions of the working – creating that political space. It starts with carbon pricing. We have seen a remarkable groundswell of support for pricing carbon as countries, states, provinces, cities, and companies share how they are do so now, how it is boosting innovation and creating jobs, and how it will shape their futures.

With so many leaders committing to deal with the economic drivers of climate change, we begin to open up the possibility of a better agreement at the international climate negotiations in Paris in 2015. We are no longer talking about “well, if we only priced carbon then things would be different or better.” Now, a sizeable portion of the world’s population has carbon pricing, and many more jurisdictions are committed to introducing it. The companies that make our breakfast cereals, our mobile phones, fly us around the world, and provide out banking services and manage our pensions use carbon pricing in their decision making. Moving past the if and when, we can now refine the how and learn from each other.

2. The Summit has secured, once and for all, that climate is everybody’s business

For the first time since Copenhagen, the climate negotiating round in 2009, climate change is now back in the in-trays of presidents and prime ministers. In the World Bank Group, we are working to support finance and ministers of economy and planning as they take on the complexity that climate change brings to their work.

The mobilization of CEOs from every industry sector from around the world is also new since Copenhagen, saying that climate action is fundamental to business planning. It is central to the long-range planning and profitability of companies in every part of the economy. What feels very different is the realization in both public and private sectors that this has to be done together. We need leadership in both, and we need to act together.

Expanding even further on that, by having faith-based communities and civil society and industry and women and government and the UN Secretary-General all marching shoulder-to-shoulder for action today, the message is unmistakably “climate change is shaping my future, and this is my business.”

We’ve seen in the last few days running up to the Summit, economic report after economic report and many economic commentators saying action to shift course to mitigate climate action is affordable, and that dealing the affects of climate change will only get more expensive the longer we delay.

In recent years, we have seen a remarkable scientific consensus emerge. Now, a strong  economic consensus is also emerging.  The missing ingredient is widespread political leadership. The UN Secretary-General has called everyone together for the Summit, and they’ve responded – 125 or more heads of state or deputies are coming.

Leadership matters. Our leaders have the scientific and economic analyses in front of them. They will have to lead over the next 15 months, and the quality of that leadership will matter.

Climate change makes every aspect of development more difficult. From now through 2015, at the same time as we try to forge an agreement on climate action beyond 2020, the world is also embarking on negotiations around the next generation of development goals. The Summit reminds everybody of the context for achieving development goals: that we are facing a carbon-constrained world where climate impacts are deeply destabilizing, where the poor are made more vulnerable, and where climate change may push even more people back into poverty.

This context completely changes the way we can achieve the sustainable development goals (SDGs), and it makes action to mitigate climate change and action to build resilience critical political and economic priorities and, frankly, the moral underpinning of the SDGs.

5.  Where movements build, they do so because they touch our lives

The march, the Climate Week activities, and the Summit are beginning to make clear to people that this is an important issue for all of us – that it’s everybody’s business, and that there are ways in which we can all feel useful.

That last point is fundamental to sustaining the movement. This is big and global, but it's about you and me. It's for leaders to decide, but it's about who we choose to lead us. Government leader, business leader, investor, faith leader, and anyone else who cares about creating a livable future, we need all of you. We need all of us.
Topics
Climate Change