My encounter with gas flares in Iraq 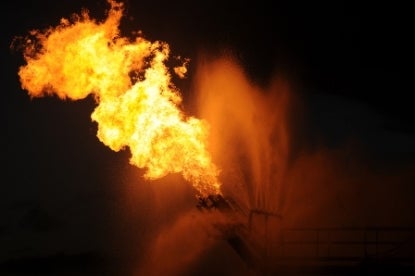 I learn on Friday that our small World Bank energy team has received permission and security clearance to visit a production site within Iraq’s giant Rumaila Oil field southwest of the city the next afternoon. I am very excited about the visit. Rumaila is considered to be the fourth largest oil field in the world and produces over 1 million barrels of oil daily from several production batteries.

That night in the UK compound on the Basrah COB (Contingency Operating Base), our planning for Saturday’s field trips is cut short by a siren announcing an incoming rocket attack. I scurry to my bomb-proof pod and have bolted the heavily reinforced door just as I hear the thud-thud of ordnance landing. The attack was not directed at our space and was very short-lived. Nonetheless, it motivates me to properly use the body armor that has been assigned to me for the next day.

As planned, on Saturday I attend a short mission security briefing which details our route and my responsibilities should an incident occur. That afternoon, our convoy of four specially equipped vehicles begins an hour–long trek to the production zone along what I believe to be Highway 6. This is the road to Kuwait made famous by operation Desert Storm in 1990. Skeletons of burned-out military vehicles still appear periodically along the edges of what otherwise is a flat and desolate 30 kilometers of divided highway.

We proceed through a small, but heavily guarded checkpoint operated by the Iraqi state oil company police. On the road’s surface, we are now about a mile directly above the oil giant. It is hot and I find my own body armor to be uncomfortably restrictive. Ahead I see smoke on the horizon. As we approach, it appears as if the earth has caught fire. Gas and high volatility liquids that have not been captured and combined with the crude oil production are being burned into the atmosphere. Called “gas flares”, some are so close to the road, I can hear their thunder from inside our protected vehicle and can almost feel their heat. The smell is bad, the waste enormous, and the environmental impact appalling.

In its attempt to rapidly increase its production of crude oil, Iraq is flaring an estimated 9 billion cubic meters of associated gas this year, ranking it among the top five flaring nations in the world. The gas currently flared in this country is enough to fuel all of Iraq’s electric power needs, most of which is unmet or generated by heavy fuel and crude oils.

Ironically, that morning, our group toured the Hartha Power Station that was being re-commissioned in Basrah with World Bank assistance to help remedy the chronic shortage of power in Iraq. On this day, one of four units is operating but being run on crude oil even though it is connected to a natural gas pipeline system which could be used to capture and transport the gas being flared.

Our party stops at the production offices of a major oil company that has been contracted to reactivate part of the field. I learn from them that the truth is more complicated than it might appear. Under current law and regulation, flaring is a permitted practice. By contract, oil field operators are not compensated in any way for gas produced in association with crude oil. However, operators are encouraged to produce as much crude oil as possible, and thus are perversely ``incentivized’’ to increase flaring. This operator indicates a willingness to invest in flare reduction facilities, but only if their reactivation contract is renegotiated.

On my way back to Basrah, I contemplate the situation further. It is not hard to estimate the dollars involved in these decisions and I rapidly pound the numbers out on my BlackBerry.  In another place, at another time, the environmental and economic incentives to end flaring would be most compelling, but I am frustrated to compute that here and now, flare reduction has low priority. The savings from shifting from liquid fuels to gas for Iraq’s power generation is estimated at several billion dollars per year, but this benefit is less than one week’s increase in revenues from targeted incremental crude oil sales.

As our convoy re-enters the safety of the operating base, I wonder how such an evident problem has avoided an obvious solution. Would it be possible to broker a solution between the various interests of state and private oil companies and government Ministries? Might Iraq’s recent entry into the World Bank’s Global Gas Flaring Reduction Public-Private Partnership be the avenue to develop multiple wins (operational, cost, and environmental) solution?

The GGFR is a voluntary partnership of industry and government organizations which seek to put an end to unnecessary flaring worldwide. Global flaring is currently estimated at over 130 billion cubic meters annually adding 360 million tons of CO2 emissions. However lessons learned from the GGFR experience when properly conveyed and implemented can lead to reduced flaring. The partnership recently marked a milestone with satellite data estimating a 9 percent drop in gas flaring world-wide in 2010. The decline is equal to taking six million cars off the road.

As I recall the events of the previous month, I am convinced that with a proper mix of regulation and incentives, the World Bank and the GGFR in cooperation with its partners in Iraq can overcome the barriers that currently prevent the capture and use of flared gas in country.

It is my hope that in the not-too-distant future the flares will be out, and the lights on in more homes across Iraq. Excellent note on flaring in Iraq and you have captured the main points encouraging flaring. The main obstacle is that the concessioned oil companies or producers are not compensated to the recover gas, but even if they were, there concession will be way less than their cut in oil production so the economic sense would be to continue to flare! The solution is to have a government law that prohibits flaring, except to prevent venting, coupled with gas production compensation to actually build the facilities to capture this associated gas. This will force the oil companies/field operators to consider the arrangement when bedding for the fields and actually have the gas capturing apparatus in pace when producing oil.

There is a program that will capture this gas in Iraq, which will be used mostly for electricity generation and I believe that the parliament has approved it or in the process of approving it and the contracts are being finalized with the oil companies. I think the WB along with GGFR can help with the proper setup of these contracts/arrangements to achieve zero flaring.

Excellent piece by Lesnick. I am working on Iraq energy sector and am pleased to learn that Iraq has joined the GGFR partnership, which I was proposing in a paper I am currently drafting for the UN. It should be noted that most of the major IOCs currently operating in Iraq are already members of the GGFR partnership. However, with the benefit of (a long) hindsight, I recall the Bank once financing gas flaring projects, as the venting of methane is much more harmful than the CO2 it becomes after flaring. Well, according to OPEC figures, Iraq shows a "shrinkage" of associated natural gas produced almost equivalent to the quantity it flares. I believe that problem also has urgency but is not currently being addressed by anybody. Of course, natural gas should become the fuel of choice for Iraq's electric power generation system. But therein lies another tale.