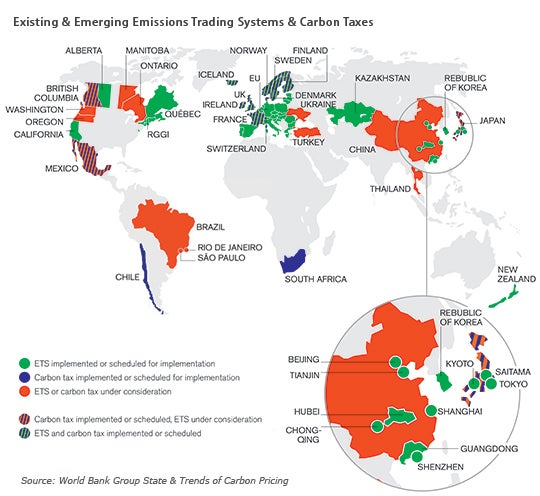 Around the world, countries are developing ways to put a price on carbon to fight climate change. They are choosing different approaches depending on their national circumstances. China has pilot emissions trading systems (ETS) in seven provinces and cities and is planning a national ETS in 2016. Chile recently approved a carbon tax to start in 2018. Mexico and Colombia are implementing sector-wide crediting mechanisms that reward low emission programs with carbon credits, for example in the transport sector by substituting conventional vehicles with electric cars. Many countries have renewable energy portfolio standards and feed-in tariffs.

These domestic initiatives are crucial to lowering greenhouse gas emissions. Each is being designed individually, though, creating a patchwork of regulations and missing the economy of scale that a connected system could bring.

The World Bank Group has been working on ways to network these initiatives and facilitate an integrated international carbon market.

Networking domestic efforts can help countries achieve their climate mitigation objectives in a more cost-effective way. When different carbon pricing systems are connected, they create a larger, potentially more liquid, market. The larger the market, the more the price of carbon is resilient to extreme volatility. Also, by connecting with different carbon pricing systems, countries can tap into other abatement options, which can help to reduce costs. The cost and efficiency benefits that result from networking may, therefore, enable countries to increase the ambition of their climate mitigation efforts.

An integrated carbon market also has advantages for the private sector and the flow of finance. Currently, about 40 countries and more than 20 cities, states and provinces have or plan to implement some kind of carbon pricing. In many cases, each is following a different climate mitigation rulebook. This makes it difficult to track progress and compare achievements among different jurisdictions. This variability is reflected in the wide carbon price range: within the United States alone, the carbon price under the Regional Greenhouse Gas Initiative (RGGI), involving nine northeastern states, was $5.21 at its most recent auction, while the carbon price under the California ETS was $12.10.

Many existing approaches to integration focus on equalizing carbon assets across jurisdictions so they can be traded on a 1:1 basis. But this requires significant time, effort, and resources. The Networked Carbon Markets initiative instead focuses on comparability, rather than equalization. It would allow for cross-border exchange on the basis of “trading ratios” or “carbon exchange rates,” much like in currency markets.

The World Bank Group has been discussing the Networking Carbon Markets Initiative with stakeholders since 2013. This week in London, the Climate Markets & Investment Association and ING are bringing the finance and investment sectors together as part of the Networking Carbon Markets Knowledge Series. The event will provide an opportunity to discuss approaches to assessing the relative value of climate mitigation efforts and enabling cross-border trade on the basis of carbon exchange rates. Institutional requirements will also be explored, including how an International Carbon Asset Reserve and International Settlement Platform could support carbon market-related functions and, ultimately, a networked international carbon market.

While countries are developing custom-made answers to the climate problem, stakeholders from the private and public sectors, research communities and civil society are working on ways to compare these blueprints so that all climate action is accounted for and accommodated by a more efficient and networked international carbon market. It will be interesting to see how these national efforts are considered with respect to INDCs and how markets take shape. Will inter market exchanges be allowed as national contributions? For markets within a single country it will not be a problem but for markets in different countries and exchange between those need some thinking.