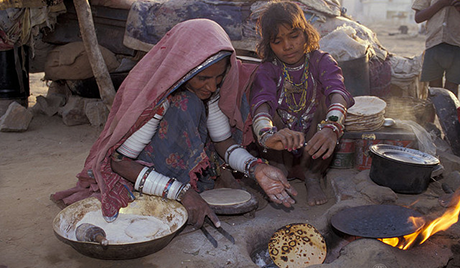 A good friend of mine recently returned from her mother’s funeral in Germany. She had died of lung cancer after spending the last eight years of her life in a slum in New Delhi where she taught orphaned children.

I can’t help but wonder if breathing the dirty indoor and outdoor pollution in New Delhi contributed to her cancer. My friend has the same question.

South and East Asia had the largest number of deaths linked to indoor air pollution.

Thinking that my friend’s mother perished as result of pollution may not be so far-fetched.

I had met my friend's mother some 20 years ago in my village where she and her husband were missionary teachers. I remember her as petite, kind, and soft spoken. She, a foreigner, gave all her life to educating Indian kids. But what did she get in return – and what can we do to halt 7 million premature deaths a year?

Just like the “Smoking Kills” warning on cigarette boxes, putting “Breathing Kills” on every air polluting vehicle and industry is not an option. Certainly not when they run the engines of economic growth and help move Gross Domestic Product (GDP) in a healthy trajectory.

We must ask ourselves: Is it time to revise our calculations of GDP?

A recent publication by my colleagues at the World Bank, Greening India’s Growth makes a strong case for assessing GDP after accounting for the cost of environmental degradation. It shows how India is losing 3 percent of its GDP every year to the cost of indoor and outdoor air pollution. Fortunately, the report also shows policy options to promote green growth that are not only affordable, but that will also help boost India’s economic growth. These measures would cost the economy just 0.02 percent to 0.04 percent of average annual GDP growth.

The WHO estimates suggest that nearly 13 percent of deaths could be averted if we improve air quality worldwide. Lower levels of air pollution will reduce the burden of respiratory and cardiovascular disease-related illnesses, healthcare costs, and lost worker productivity due to illness - as well as increasing life expectancy among local populations. All this would help boost GDP and offset costs associated with a shift to a low-carbon economy.

Of course, climate change brings a number of health risks, such as an increase in the prevalence of vector-borne diseases such as dengue or malaria. This should also be factored into our GDP calculations.

Clearly there are multiple benefits to addressing air pollution that can also feed into improved macro-economic performance at the national, regional and global level. Perhaps it is time to make that paradigm shift in the corridors of power – the ministries of finance and economics in the developing nations that the World Bank serves.