The April 2018 update includes 97 new surveys, which brings the total number of surveys to 1577. With Malta now included for the first time, the total country coverage of the global poverty monitoring stands at 164 countries. Aside from the addition of new surveys, several changes to the existing data have been made. Some changes reflect improvements in the welfare aggregate based on new harmonization efforts and more available information. For example, an update to the harmonization methodology of the Socio-Economic Database for Latin America and the Caribbean (SEDLAC), has created revisions to many poverty estimates in this region. Other changes involve improvements and minor corrections in the construction of welfare aggregates. When relevant, auxiliary data, such as the CPIs and National Accounts data, have also been updated as part of the regular updating cycle. Finally, a few surveys have been dropped from the database based on data quality concerns, such as concerns over insufficient documentation and a lack of inter-temporal comparability. A detailed description of all changes made are outlined in Atamanov et al. (2018). 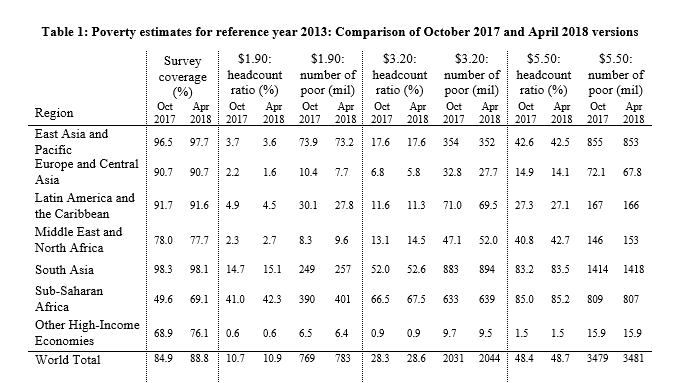 Table 1 details the impact of the updates on global poverty in 2013. The global $1.90 headcount ratio increases from 10.7% to 10.9% with the new data, and the number of poor increases from 769 million to 783 million people. This change at the global level is primarily driven by new surveys from South Asia and Sub-Saharan Africa. Particularly, new surveys in Bangladesh and Ethiopia each add more than 7 million poor people compared to the previous estimate, which was based on extrapolations of older surveys.

The revised data can be accessed at http://iresearch.worldbank.org/PovcalNet.