Cash grants and training programs have been widely implemented in low- and middle-income countries to stimulate entrepreneurship. Impact evaluations of such programs often find sizeable positive effects on male recipients' income and business outcomes but little impact on women (Bernhardt et al. 2019). This suggests that women face gender-specific constraints that limit their ability to participate in the labor market and decision-making over finances and resource allocations in their households. Gender-specific constraints include limited agency, risk of expropriation of earnings by other household members, and gender-related norms and stereotypes, among others (Duflo 2012; Jayachandran 2021).

Another hypothesis is that as women’s entrepreneurship and economic empowerment increase, it may lead to resentment of their male partners and increase the likelihood of intimate partner violence (IPV). Researchers found that cash transfer programs overall tend to decrease IPV. However, it is still an open question whether these findings can be applicable to the MENA region  where the societies and attitudes towards gender equality tend to be more conservative (Buller et al. 2018; Jayachandran 2021). Some evidence suggests that adding a “gender dialogue” component – in which men and women discuss household dynamics – to an economic empowerment program for women may reduce IPV (Gupte et al. 2013).

Our recent study presents the results of a randomized controlled trial (RCT) of a program that aimed to address not only women’s financial and human capital constraints but also some of the gender-specific constraints. The RCT was conducted in Tunisia, where gender gaps in the labor market are massive: in 2018, only 19% of working-age women versus 60% of working-age men were in paid- or self-employment  (ILO 2021). Globally, the corresponding figures are 49% and 75%. The RCT involved 2,000 poor women living in rural Tunisia.

Participants were assigned to two groups:

The study analyzed the impacts after two years.

Men’s involvement may have backfired

Results show that the cash grant and training program positively affected female income-generating activities (IGAs), but only for women who were not encouraged to invite their male partners to the training . Compared to the control group, women who received the cash grant and the training without their partner were 3.4 percentage points (+45%) more likely to have an IGA at the end line, and their income was 61% higher relative to the control group. However, we find no effect on these outcomes if male partners are invited to the training.

This evidence suggests that husbands' involvement in the cash grant and training program was detrimental to the promotion of women's IGAs, either because it reduced women’s privacy over the cash grants, or because men involved in the training felt part of the program, giving them more legitimacy to influence how cash grants were spent.

In addition to measuring the impacts on income-generating activities (IGAs), we also tested the effects of the program on agricultural activities; the cash grant and training program had significant positive effects on participation in livestock farming (+4.7 p.p.) and small-scale agriculture (+2.4 p.p.), two occupations traditionally undertaken by women at home. While we find some evidence of change in agricultural practices, agricultural techniques remain traditional, with almost no use of fertilizers and pesticides. Agriculture remains mostly small-scale.

Overall, the impact of the cash grant and training program on women’s IGAs seems limited and far from transformative.

Other household members have more IGAs

Women and their household benefit from the cash grants and training 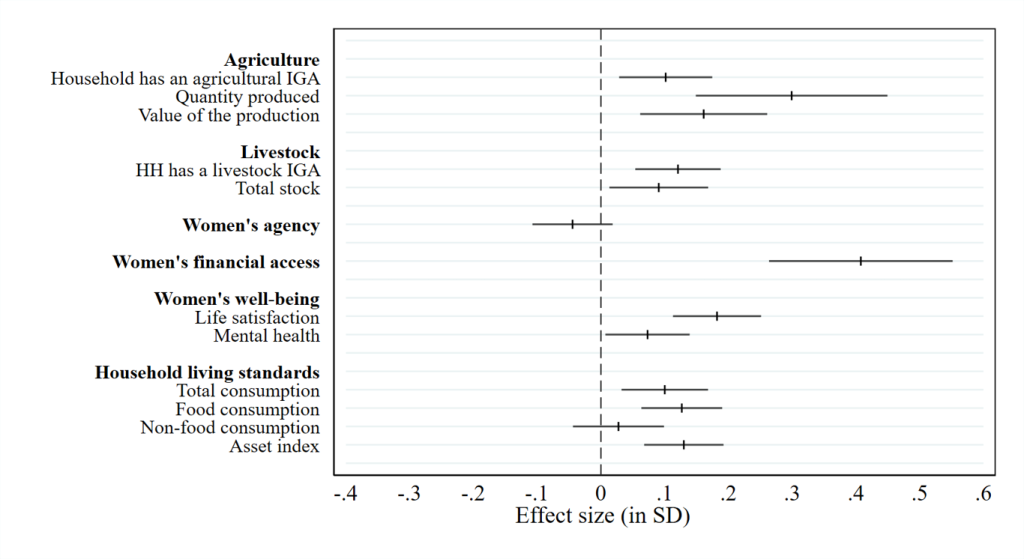 The program is highly cost-effective, but…

Our findings illustrate the positive impacts of capital injections on household income-generating activities, living standards, and life satisfaction in a sustained way. Families benefitted from increased food consumption, asset ownership, investments in agriculture, and employment of other household members. We estimate that the material benefits of the cash grant and training program are 17 times their cost. Also, only 1.2 years of benefits are needed to obtain a positive benefit-cost ratio, which shows that the program is highly cost-effective, even in the short run.

On the other hand, the cash grant and training program had limited impacts on women’s entrepreneurship and wage employment. Instead, the program positively impacted agriculture and livestock farming - occupations traditionally undertaken by women. The program also increased the number of other household members with an IGA suggesting that such interventions may generate strong spillovers beyond direct participants, which has important policy implications. Involving male partners in the training had no positive impact; instead, it seems to have harmed women's employment prospects. However, the gender-dialogue component of the program was relatively light and may not have been robust enough to adequately tackle some of the problems underlying gender inequities in the household, as well as women’s ability to become financially independent and autonomous decision-makers. But these issues may be conceptualized and experienced differently in the Tunisia context. Our results highlight the difficulty of stimulating women’s income-generating activities and challenging gender roles in traditional societies and that attempting to do so may have opposite consequences than anticipated . This highlights the need to develop and test unproven interventions that directly target norms carefully.