Poverty in Brazil is disproportionately concentrated in rural areas.  Although rural households account for only 15% of the population, 45% of them fall within the nation’s poorest quartile.  A large proportion of the rural population relies on small scale agriculture for their livelihoods, highlighting the importance of inclusive growth in the sector in contributing to poverty reduction. Accessing markets is one of the major development challenges faced by small producers (WB 2016). As a result of limited commercial activities and viable business plans, opportunities to access financial services to invest are limited. When rural organizations are asked what their main limitation is to the development of new projects or to diversification of the services offered, 56% of the organizations stated that a lack of resources - financial, physical, and human- was the main limitation.

Our impact evaluation of the São Paulo Sustainable Rural Development and Access to Markets Project finds that rural organizations that were not supported by the project fared poorly during the recent economic crisis in Brazil, losing almost half of their average sales value between 2012 and 2017.  But outcomes were very different for organizations that were supported by the project. These organizations not only maintained their sales in the same period, they actually grew them substantially.  In this post, we describe the project’s approach and show how an impact evaluation was used to demonstrate the project’s success.

The state of São Paulo and the World Bank developed the São Paulo Sustainable Rural Development and Access to Markets Project, aiming to foster rural development by linking smallholder producers to markets. By strengthening smallholder organizations, the project seeks to improve market access, which is challenging to achieve by individual farmers given the limited extent of production. The project followed a Productive Alliances (PA) approach. The PA approach seeks to address potential market failures such as limited access to finance, the lack of information on profitable business opportunities and limited business planning capacity, among others.  The project tackled these barriers through the development and implementation of business initiatives aimed at improving linkages between smallholder producers, buyers, and the public sector. The selected business initiatives received technical support to implement the proposal and a grant covering 70% of the business plans’ cost. From 2012 to 2018, 266 organizations, representing around 8,000 smallholder farmers, were selected. Examples of activities that were financed include construction of processing structures, packinghouses, structures for small agroindustry, investments for improvement of transport and logistics, for the procurement of trucks.

Although PA approaches have been widely used in Latin America, there is limited rigorous evidences on the impact of such grants programs in rural areas (Cravo and Piza summarize the effects of matching grant programs implemented in the private sector). A baseline among all organizations in the state allowed us to select a group of associations that were most similar to the participating organizations in 2012 yet did not receive the program. A follow-up data collection was conducted in 2017 to assessed what happened with the participating and control organizations compared to their baseline situation.

The evolution of the sales value of participating organizations between 2012 and 2017 indicates a significant increase, as shown in Figure 1. In contrast, the control group experienced a severe reduction in the sales value. This is not surprising since during this period Brazil experienced an economic crisis with real GDP shrinking by 0.7% in real terms between 2012 and 2017 (IBGE), with a particularly strong contraction between 2015 and 2016. The economic crisis precipitated in a rapid rise in unemployment, reaching 12.7% in 2017 (IBGE), and a rising poverty rate. The sharp decline in the sales value among control organizations illustrates this negative shock. The project helped buffer organizations against this shock and foster growth. The dashed line illustrates the likely trajectory participants had followed in absence of the program. Considering this counterfactual and controlling for organization fixed characteristics, the overall estimated impact of the project is an increase of 87% in sales value, much larger than the initial project’s target of an 8% increase. 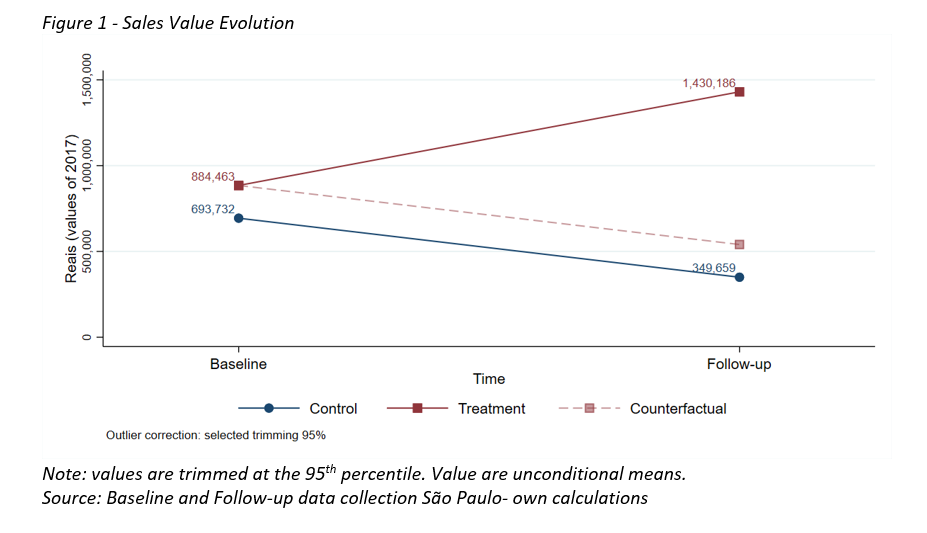 At the household level only an endline was conducted. We find evidence that the positive effects of the project trickled down to household members. Households linked to treated organizations sell a larger share of their production through the organization at better prices. As a result, we observed a 31% increase in revenues. Even though suggestive, these results are very much in line with what we observe at the organization level.

The results suggest that the project greatly surpassed its initial goal with respect to its main objective in increasing sales value. However, further research is needed to shed light on the sustainability and efficiency of the approach. First, are recipient organizations capable of providing adequate maintenance of the investment, sustaining the growth, and does the initial boost enable a higher level of investment in the future? Does the increment in sales value and producer revenue translate into a sustainable increase in income level for producers? Second, is the PA approach the best way to address the constraints faced by smallholders and their organizations or are other strategies more cost-effective, such as changes in the regulation of credit markets or provision of standalone technical assistance? Further experimentation and evaluating alternative policy designs could shed light on some of these questions.

The full report can be found here and more information about the DIME agriculture program here. Interesting article! However, it can be made even more interesting by giving the reader some clues regarding which specific activities contributed to making participant organizations more successful than control organizations.