Development Economists Can Learn from a Pop Musician

In his hit My Valentine, former Beatle Sir Paul McCartney sings about a Moroccan vacation where foul weather meant he and his love could not enjoy the vacation and planned sightseeing they had envisioned. Sir Paul was frustrated, until his love said the weather mattered little and they should change their mindset and make the most of it. That advice inspired the opening lyrics of his tune -- What if it rained?/ We didn't care/ She said that someday soon/ The sun was gonna shine/ And she was right/ This love of mine,/ My Valentine -- and taught him a valuable lesson: Complaining about the missing ingredients necessary to achieve any goal is a waste. It is far better to focus on what is already available and make the most of things.

Economists could draw inspiration from such wisdom: No matter how bad existing conditions in a low-income country are, there are always some areas they can do relatively well. It is much better to identify these areas and scale them up, than to spend time listing all the missing conditions for doing something that they are not good at. Such conditions are often in the image of an idealized advanced economy. Sounds obvious? Unfortunately the history of the discipline shows that researchers have not yet embraced Sir Paul’s optimism.

The first wave of researchers working on low-income countries, which emerged after WWII, focused on structural change by promoting the development of advanced modern industries. They thought the absence of such industries in poor countries was due to market failures and recommended a state-led import-substitution strategy - many of which failed due to inherent distortions in that strategy. By the 1980s, a second wave led a gradual shift to free market policies, culminating in the Washington Consensus, advocating stabilization, liberalization and privatization. It assumed structural change would happen spontaneously as long as markets remained free. Its results were also disappointing.

Despite stark differences in their theoretical foundations, the first two waves of thinking both held up advanced economies as the paragon for poor economies and built their policy frameworks based on the elements that the latter were missing (advanced industries, good business environment and governance, strong human capital, etc.).

I propose to start a third wave --“Development Economics 3.0”, motivated by the success of initially poor countries in Asia and other parts of the world, which aims to refocus on economic transformation. In doing so, the third approach, which I call New Structural Economics (NSE) in my recent book, is consistent with Sir Paul’s optimistic stance. NSE holds that, no matter how bad its current economic situation is, any poor country has sectors that are consistent with its comparative advantage (that is, what they can do well) based on their existing endowments. The government can help private firms scale up those sectors and become competitive in domestic and international markets. In the process of structural change the country can also exploit the benefits of backwardness to achieve sustained dynamic growth.

NSE draws on lessons from success, a method taken up by the Growth Report of Michael Spence and others. Their report pinpoints which economies recorded multiple decades of growth in the postwar period. Thirteen economies qualify: Botswana; Brazil; China; Hong Kong, China; Indonesia; Japan; the Republic of Korea; Malaysia; Malta; Oman; Singapore; Taiwan, China; and Thailand.

These cases demonstrate that fast, sustained growth is possible. According to Spence and his Commission colleagues, these economies share five traits. First, they are open. Second, they maintained macroeconomic stability. Third, they mustered high rates of saving and investment. Fourth, they let markets allocate resources. Fifth, they had committed, credible, and capable governments. In fact, the last two are the preconditions for a country to follow its comparative advantages and the first three are the results of doing so. 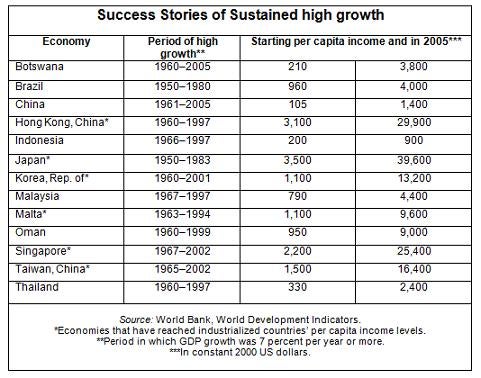 The ideal industrial structure emerges when all industries are consistent with an economy’s comparative advantages and are competitive in domestic and international markets. Macro stability, high savings and fast capital accumulation ensue, the endowment structure and comparative advantages shift, and eventually it is necessary to upgrade the economy’s industrial structure to a more capital-intensive level. This evolution requires changes in hard (physical) and soft (institutional) infrastructure to reduce transaction costs. Upgrading is inherently beset by outside obstacles and coordination issues that cannot be fixed by individual firms alone, therefore the government needs to play a proactive facilitating role.

At its heart, development economics should be about supporting low-income country governments to set up effective policy frameworks and design interventions that allow the private sector to develop competitive industries and tap into the latecomer advantages. That is the open secret of dynamic and inclusive growth.

It was actually another Beatle's song, “Got My Mind Set On You,” by George Harrison that was playing on the van radio after my first trip to the World Bank in graduate school, a decade ago. At the time, I remember entreating my classmates to pay close attention to the lyrics.
“Listen,” I said. “This should be the international development anthem.”
http://www.youtube.com/watch?v=6GdeU0ww4zY&feature=player_embedded
I still agree that it’s gonna take a plenty of money and a whole lotta precious time. And though my mind remains set, I’m still trying to figure out how to do it right, child.
We all are.

http://www.oxfamblogs.org/fp2p/?p=4916 for a full comparison between Bob Marley and the IMF's takes on food prices:

'Cost of livin' gets so high,
Rich and poor they start to cry:
Now the weak must get strong;
They say, "Oh, what a tribulation!"

I think we are talking about the investors in here, who are making high returns from cheap labor. and a system of tradition that does not allow so much westernization like the people in Africa. If poor nations want to be like the Asian tigers they ought to patronize their own ideas of developments, develop a disciplined people that will appreciate technological know-how over corruption and stalling pride in power which adds no value to humanity.

Or if your prefer in my English translation : “ As our chances of making the wrong decisions are considerable whereas only few approaches will lead to success, our best bet to solve our present and future problems is to draw the lessons from past success.”

I like your story, emphasing the necessity to face reality and take advantage of conditions to best achieve possible progress and improvement. A pragmatic approach will yield results.

The developing world needs its own economic model based upon very different conditions to produce growth. No economist has yet described China's last 30 years of economic growth in a model or framework. Whoever could do this deserves the Nobel prize, as it would add a new dimension to both understanding and the range of possibilities in global development.