In this context, one of the most obvious business environment impediments is corruption. It is no secret that corruption imposes significant monetary costs on private firms. These costs include both the direct transfer of money (the need to pay bribes) and the indirect costs incurred through resources devoted to rent-seeking activities. For instance, firm-level survey data for several mostly developing countries (Enterprise Surveys) shows that bribes paid to public officials to “get things done” average over 2 percent of the annual sales of firms in those countries.

This simple idea that access to finance can determine how much corruption impacts firms has not been discussed much in the literature. In fact, there is only a limited discussion of factors that magnify or mitigate the effects of corruption. The literature is almost exclusively focused on the overall effects of corruption, resulting in the two contrasting views discussed above - “sands the wheels” and “greases the wheels”.

Theories apart, do firms that have poorer access to finance suffer more from corruption in terms of productivity, growth, job creation, etc.? What does the data say? In our recent study, Amin and Soh (2020), we attempt to answer this question. We use firm-level survey data for 135 mostly developing countries collected by the World Bank’s Enterprise Surveys between 2006 and 2018. The study estimates the impact of corruption on job creation by the firm over the last three years, and more importantly, how this impact varies as the financial constraints experienced by the firm become more severe. Exploiting the richness of the data, we use an overall measure of corruption, which is the amount firms pay to public officials to “get things done”, as well as measures of petty corruption that arises in accessing specific public services such as obtaining permits and licenses, electricity connections, etc.

Figure 1: Impact of an increase in overall corruption on employment growth for firms that face low vs. high levels of financial constraints 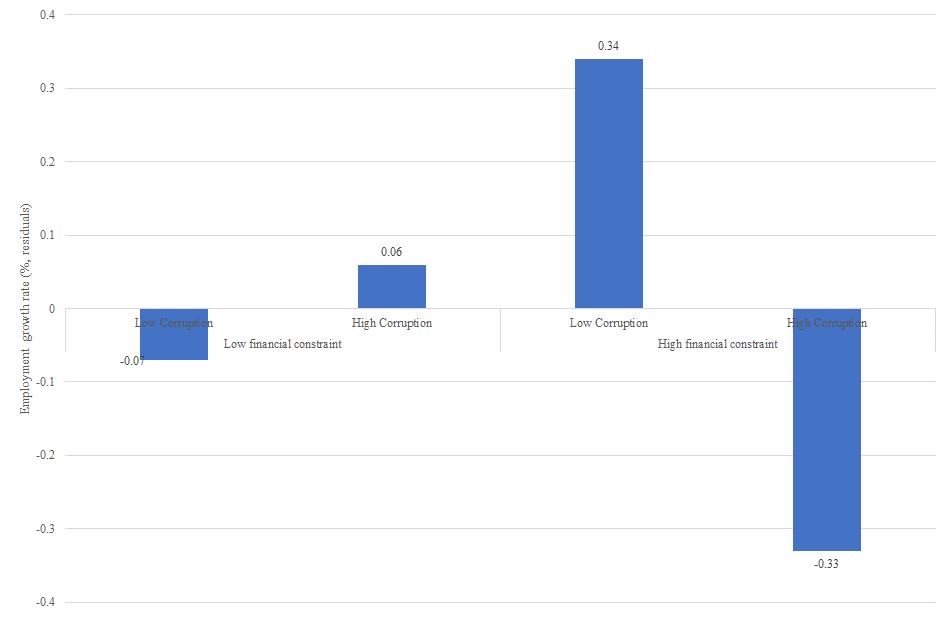 Source: Enterprise Surveys, World Bank.
Notes: The figure is a partial scatter plot of the residuals of growth rate of employment plotted against residuals of overall corruption and residuals of financial constraints variable.

Of course, several interesting issues remain to be explored. First, it is important to check if these results extend to other aspects of firm performance such as productivity, innovation, exports, etc. Second, there may be factors other than corruption whose effect may be mediated through access to finance.  This suggests a rich and fruitful line of future research. Third, it will be interesting to check if financial constraints play a similar role for corruption faced by individuals and households. Understanding these issues is especially important now as countries around the globe face economic contraction. Better policies with maximal impacts are more important now than before given the hardships imposed by the pandemic and the resource crunch that policymakers are facing across the globe.  We hope that our study helps motivate future research in the area.