eBay reduces trade costs where it is most needed

eBay, an online marketplace, reduces the effect of distance on international trade by 65%, mainly through a reduction in information frictions that creates trust between market participants. As online markets help overcome market and government failures, the reduction in trade costs is larger where it is most needed: in remote countries with weak institutions that export information-intensive goods.

In the 1990s, many commentators believed that with advances in transportation and communication technologies, geographic distance between countries would soon no longer encumber international transactions. Frances Cairncross (1997) famously predicted the “death of distance”. But despite some anecdotal evidence in support of this prediction, a large number of academic papers has established that distance has been thriving, rather than dying.
Chaney (2011) seems to have provided the last nail in the coffin of the death-of-distance hypothesis. He argues that the persistent effect of distance on international trade flows can be explained by the need for direct interactions between trading partners resulting from information frictions, rather than shipping costs. But this would suggest that all the technological advances of the last decades have failed to reduce information frictions.

A new World Bank Policy Research Working Paper, co-authored by Andreas Lendle, Simon Schropp, Pierre-Louis Vézina, and me, tries to breathe new life into the death-of-distance hypothesis. We argue that the right place to look for the death of distance is in online markets, which, contrary to offline markets, make full use of those technologies that can effectively reduce information frictions. Indeed, online platforms, such as eBay or Amazon.com, no longer require exporters to make multiple phone calls, send faxes, write emails, and attend trade fairs and networking events in order to make business. And while importers still incur some search costs, these are brought down to a simple internet search.

The heart of our paper is a dataset on cross-border transactions conducted on eBay, the world's largest online marketplace. It covers all eBay transactions between 62 countries during 2004-2007 (representative of 92% of total world trade), and disaggregated into 40 product categories. This dataset allows us to compare the effect of distance on international trade between online and offline transactions. Keeping in mind that the comparison of online and offline trade is no small feat (see Hortacsu et al. 2009), we match eBay product categories to product descriptions from the 6-digit level HS classification to build comparable basket of goods so as to avoid comparing online apples to offline oranges.

The death of distance online is reality
Prima facie evidence (Figure1) indicates that the relationship between trade flows and distance is indeed more flat-sloped on eBay (left panel) than offline (right panel).

Figure 1. The effect of distance on trade: Online vs. offline

To identify as precisely as possible the effect of distance, we use a gravity framework, controlling for other standard gravity trade costs, such common language, a common legal system, a common border, a colonial history, or a free-trade agreement. We find that distance matters 65% less online than offline.

How eBay shrinks the world
Traditionally, economists have attributed the effect of distance to shipping costs. However, it seems unlikely that a reduction in shipping costs is driving online efficiencies, since eBay trade is typically single-item shipments to end-consumers, rather than bulk shipments that would benefit from scale economies. Rather, we hypothesize that eBay reduces information frictions that are equally captured by the distance coefficient. We show that the distance-effect reduction is indeed largest for exporting countries which are relatively unknown to consumers, as measured by Google search results, and less trustworthy, as measured by corruption indices. This confirms that eBay shrinks the world even more for exporters from obscure and unknown places.

We also show that the distance-effect reduction is largest for information-intensive products, as measured by elasticities of substitution. As a further test, we look at whether distance is reduced by the eBay seller-rating mechanism, which may increase buyer trust in exporters. As predicted, we find that distance matters significantly less for sellers with higher ratings.

All in all, this confirms our hypothesis that eBay reduces information frictions and establishes trust between market participants that would not otherwise have traded.

How much would countries gain from a flatter world?
We conclude with an estimate of the gains from trade brought about by internet technologies. We use the approach proposed by Arkolakis et al. (2012) to calculate the welfare gains that would result from a drop in information frictions to the online level. We find that in the average country, real income would increase by 29%. Quite straightforwardly, the gains would be highest in countries remote from the rest of the world (Figure 2). 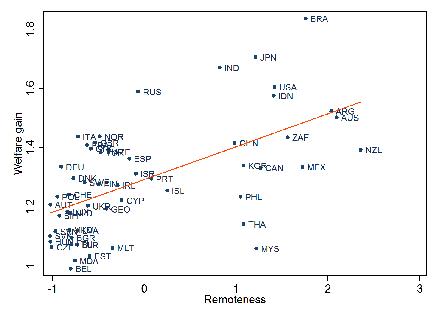 The death-of-distance hypothesis is alive – at least online. On eBay, the distance effect on trade flows matters 65% less than for comparable offline transactions. We demonstrate that this is because technology reduces information frictions associated with geographic distance. If information frictions offline were reduced to the level prevailing on eBay, the trade gains would translate into large increases in real income.

The gains from the adoption of eBay are larger in those areas of the world where they are most needed – in remote countries with bad institutions. Thus, e-commerce can become a development tool by helping remote sellers from instable countries integrate into world markets. Export promotion agencies in these countries should probably redirect part of their effort towards connecting producers to online markets.

A slightly different version of this blog was originally posted on VoxEU.org Professor of Economics, University of Geneva