Gender discrimination in the private sector: Evidence from the Democratic Republic of Congo

Since the time of the survey, significant progress has been made in the DRC reforming laws limiting a woman’s economic opportunity. The Women, Business and the Law (WBL) index tracks the legal barriers that women face throughout their working lives and, according to this metric, as of 2022, the DRC receives a score of 78.8 out of 100, which is above the regional average for Sub-Saharan Africa (71.5).

However, at the time of the survey, despite the high female labor force participation rate, the legal barriers women faced were onerous. Women made up 48 percent of the labor force, but 80 percent of women worked in agriculture, with only 16 percent and 4 percent employed in the services and industrial sectors, respectively. When the survey was carried out, women in the DRC had less than half the rights of men in the areas covered (score of 42.5 out of 100 on the WBL index). The legal restrictions came in three main forms:

Since then, legal requirements for spousal permission have been removed and women are allowed to work night shifts; however, restrictions remain in place on the work-related activities that women can perform.

Acknowledging progress while learning from the past

While we recognize the importance of the recent reforms implemented by the DRC, we believe that studying the pre-reform situation remains relevant. Such knowledge can inform a more general discussion on the association between legal frameworks and women’s labor market outcomes that may also be relevant for other countries. It also highlights the potential benefits of undertaking legal reforms.

To dive deeper into what was holding women back, we surveyed employers as part of the World Bank Enterprise Survey to uncover whether employers were implementing these discriminatory laws, had discriminatory attitudes in general, and what consequences this may have had on women’s employment. The data are nationally representative of the formal private sector in the DRC.

The survey data shows that the enforcement of these discriminatory laws, such as spousal permission, was not universal.

Across several domains, the survey revealed stark differences between firms’ discriminatory behaviors in Kinshasa—the capital city—and in the rest of the country, as summarized in the graph below. 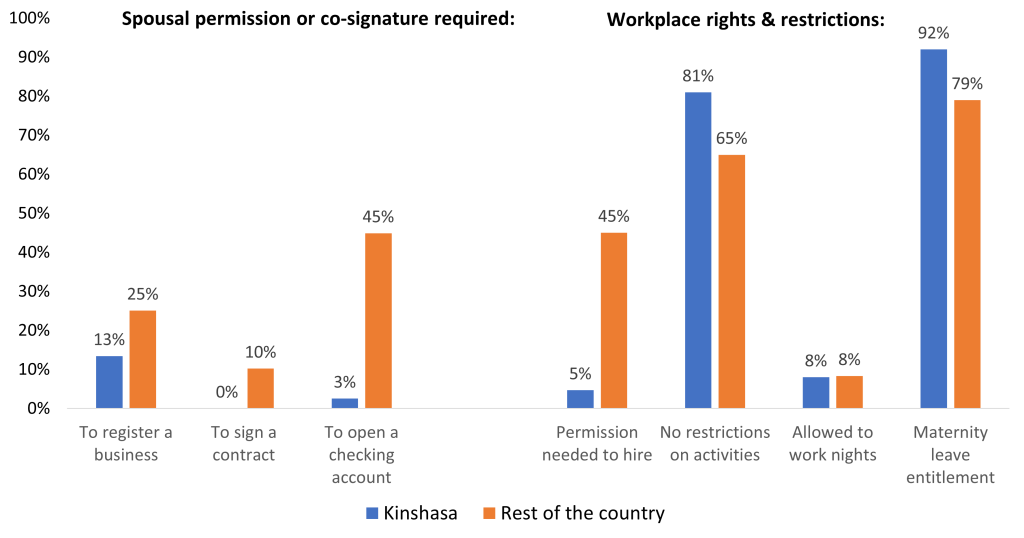 As legislation set out in the labor and family code refers to the entire economy, and not just to Kinshasa, this suggests that social norms may be driving the differences we see in discriminatory behavior. Our hypothesis that social norms place a greater constraint on women outside the capital is consistent with patterns seen in DHS data, which show that—at the household level—women outside the capital have less agency.

Our analysis of the data shows that firms that are less likely to display discriminatory behavior towards their female workers are more likely to have a female top manager and employ more women. Furthermore, allowing women to work night shifts is associated with higher levels of female employment; this relationship (summarized in the table below) is strongest for firms working in the manufacturing and construction sectors.

The relationship between an enabling workplace and women’s employment outcomes:

Further analysis of these results reveals that the relationship between workplace discrimination (in terms of both tasks and nightwork) is particularly strong in the manufacturing sector. Our results suggest that discriminatory behavior by firms in the DRC prevents women from achieving their full economic potential. This may be an important part of the reason behind the low participation of women in formal employment  in the DRC, in particular in the manufacturing sector.

The firm-level data also facilitate an investigation into firms’ discriminatory behavior and their own performance. The results suggest that the positive association between an enabling environment for women and their outcomes extends to the outcomes of the firms themselves ; firms that do not place restrictions on the tasks that women can perform or on their ability to work night shifts have higher sales and higher labor productivity.

The fact that discriminatory behavior by firms reduces women’s entry and success in the formal labor market is evident. While several discriminatory laws in the DRC have been reformed since the time of the survey, these results should serve to motivate reforms in other countries. Additionally, the differences we see in discriminatory behavior between Kinshasa and the rest of the country suggest that social norms play a role in driving this discrimination. Therefore, changes in laws alone will not suffice to eliminate discriminatory behavior; policymakers may also need to engage in outreach campaigns to change the attitudes and norms that hold women back .