Investment in emerging and developing economies: Accelerating but still subpar

After a prolonged slowdown, investment growth in emerging markets and developing economies (EMDEs) picked up to 4.5 percent in 2017, and is projected to accelerate to 5.2 percent in 2018 and 2019 (investment refers to real gross fixed capital formation, public and private combined). Yet projected investment growth is below its long-term (1990–2017) average, inhibited by political uncertainty, trade risks, and expectations of rising interest rates. This will likely limit potential output growth and delay per-capita income convergence between EMDEs and advanced economies.

The pickup in investment in EMDEs in 2017 follows an extended period of weakness. Investment growth fell from 11.4 percent in 2010 to a low of 3 percent in 2015, despite record-low borrowing costs and ample liquidity (Figure 1). The pattern of prolonged investment weakness in EMDEs stands in contrast to the trend in advanced economies, where investment recovered rapidly following a deep contraction in 2009, and has since hovered close to its long-term average. 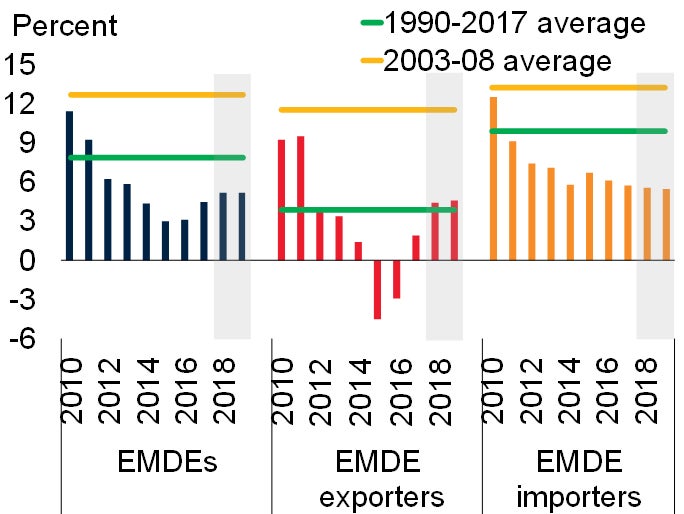 Several factors were behind the post-2010 slowdown in investment in EMDEs, including a plunge in commodity prices, lower foreign direct investment (FDI) inflows, bouts of elevated policy uncertainty and low business confidence, and weakening growth expectations. The deceleration was especially pronounced among commodity-reliant regions; some major commodity-exporting economies experienced double-digit investment contractions.
Among commodity-exporting EMDEs, 2017 marked a turning point, when investment grew by 1.9 percent after two years of contraction. The recovery in 2017 may be due to several forces: a pickup in oil and metals prices that began in 2016, and which raised capital expenditures in commodity exporters; strengthening global manufacturing; improving conditions in advanced economies; and rising global confidence. In turn, accelerating investment has boosted global trade and raised growth prospects. In the regions where the slowdown was strongest, however (e.g., Latin America, the Middle East and North Africa, and Sub-Saharan Africa), the recovery has been relatively slow to materialize

Investment growth in commodity-importing EMDEs has been higher and less volatile than in commodity exporters, but has moderated almost continuously since 2010. China, where drivers of growth are shifting away from investment in favor of consumption, accounts for a significant portion of the slowdown among importers. A combination of ongoing rebalancing in China and heightened policy uncertainty in other economies led investment growth in commodity importers to soften slightly in 2017, to 5.7 percent.

The acceleration in investment in EMDEs is expected to be sustained in 2018. However, investment growth prospects remain subdued relative to historical averages (Figure 2). As the global output gap closes and monetary policy normalization advances in several major advanced economies, inflation expectations are rising. Rising global interest rates, inasmuch as they lead to higher borrowing costs and lower capital inflows to EMDEs, would discourage investment. In addition, policy uncertainty remains high in some EMDEs, which likely delays some investment decisions. Furthermore, increased protectionist trade measures, or unexpected outcomes of trade negotiations, could hold back investment. 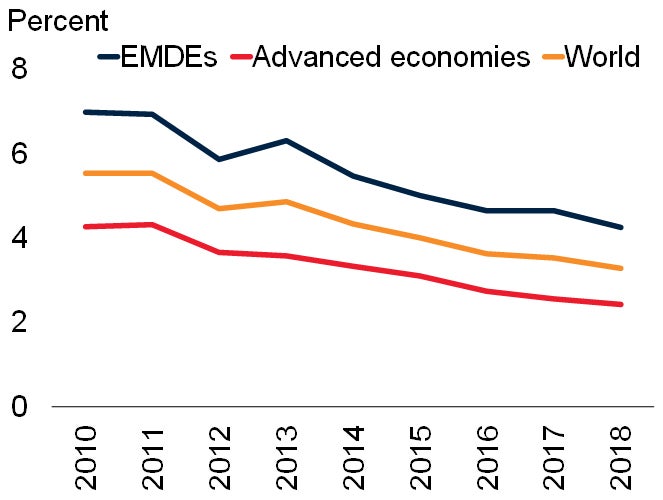 Sources: Consensus Economics, World Bank.
Note: Five-year-ahead Consensus Forecasts as of the last available month in the year denoted on the y-axis. Unweighted averages of 21 EMDEs and 25 advanced economies. Last observation is January 2018.

Encouraging though the pickup in investment is, the prospect of subdued investment growth in the medium term raises fundamental concerns. The long period of weak investment growth in EMDEs has slowed the pace of convergence in per capita GDP with advanced economies (Figure 3). It has also dampened potential growth by reducing the pace of capital accumulation and the rate at which new technologies embedded in investment can raise productivity. Filling large infrastructure needs through public and private investment; implementing education, health, and labor market reforms; and improving institutional and business climates could offset a projected continued slowdown in potential growth.

Figure 3. Difference between EMDEs and advanced economies in per capita investment and GDP growth 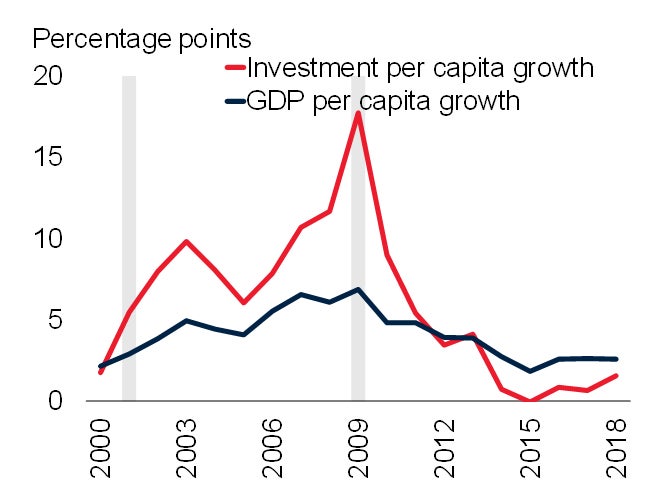