Love is supposed to be pure and unconditional. A recent study by Ginger Jin, Fali Huang and I suggests that love is complicated: the amount of love achieved may depend on whether you or your parents found your spouse, and whether you are part of a family where old age support needs to be provided by children.

Throughout history and in many countries even today, parents have played major roles in marriage formation. Until a century ago in China, marriages had mainly been decided by parents. Indeed, there were many weird patterns to modern eyes (Cheung, 1972): the bridegroom and the bride would typically never meet until the wedding (so that passion would not hinder maximizing family wealth); sometimes a girl was ‘bought’ at a very early age to be raised within a household to be groomed to become the wife of a son (so that they were trained to have good attitudes and skills), girls were taught that women without talents were automatically virtuous (so that they'd specialize in household production functions without complaints). In many other countries such as India, arranged marriages are still common. Catherine the Great married Peter as part of an arrangement made by Peter’s aunt Elizabeth, the Russian Empress in 1745. Such parent arrangements of marriages apparently were common among the royal families in Europe in that period.

Related to parent-matched marriages is the fact that in most developing countries and for much of human history, old age support has been provided by families, especially sons. When the parents want to raise a son with good skills, how can they ensure that he pays back their investment in him so that in their old age they are financially supported?

Becker, Murphy and Spenkuch (2015) suggest that parents would spend resources to manipulate the preference of the child so that he would be altruistic toward the parents. With such manipulation, the child is committed to offer old age support when he grows up and the parents age. Knowing this, the parents, even in the face of financial constraints, would optimally invest in the child's human capital.

Their insight is that couple income, wife characteristics such as the tendency to follow traditional values are sharable with parents, but love is much less so. The point that love is not sharable beyond the couple is illustrated by an episode of Seinfeld. Jerry and Elaine, once lovers and then friends for a long time, became lovers again. Witnessing Jerry and Elaine's intimate behavior, Kramer, Jerry's friend and neighbor, blurted out, “I like you two much more when you were friends!”

Unable to fully enjoy the love between the couple, the parents, when becoming the matchmakers, would pick someone partly based on what they like. Since a key component of old age support is provided in-house so that parents and the daughter-in-law have to get along, a submissive daughter-in-law would thus be desirable for the parents. Whether or not they'd pick a daughter-in-law with high earning capacity depends on labor market opportunities. In urban areas, earning opportunities are more abundant, and parents have incentives to pick daughters-in-law that do well in labor markets (while at the same time they can get along and they are willing to do household chores). In rural areas, earning opportunities are scarce, and parents then pick daughters-in-law that specializes in household production, and such wives tend to be submissive and have lower schooling level.

These conjectures are borne out in our research findings. Indeed, parent-matched couples had lower marriage harmony and the wives selected by parents were more submissive in their attitudes. Submissiveness is captured by whether the wife views women's careers as less important than men's, whether she thinks women can have good male friends outside marriages, and whether she believes that wives can reject husbands' sex requests. Moreover, sons in parent-matched marriages had stronger belief for providing old age support, consistent with the notion that parents in need of old age support tend to manipulate children's preference to cultivate altruism towards parents.

Interestingly, parent-matched couples earn more money than self-matched ones in urban areas, but less money than self-matched ones in rural areas. The difference can be explained by high earning opportunities and less reliance on the number of children for old age support due to stronger enforcement of the one-child policy in urban areas (relative to rural areas). Thus, to ensure old age support, parents that acted as their son's matchmakers, who presumably were more in need of old age support, work on altering their children's preference toward altruism for old age support, and they pick submissive daughters-in-law to ensure domestic harmony with them at the expense of the harmony with the sons.

While incurring agency costs for the children, parent matchmaking, when old age support is important and children are relied for such support, performs a useful function of picking daughters-in-law for the delivery of old age support.

To preserve love in a marriage, good social support for the elderly should be facilitated so that parents would not focus on manipulating children's preferences and picking submissive daughters-in-law; then love can truly prevail.

How relevant are the paper's findings for China now or for other countries? Parent matchmaking is still prevalent in China, as illustrated in the recent photo taken by Bert Hoffman in a Chinese park, in which Chinese parents were busy doing their jobs as matchmakers—the papers on the umbrella cover personal profiles of their children. And parent matchmaking is also widespread in India and many other countries. The findings here could have implications in these countries. 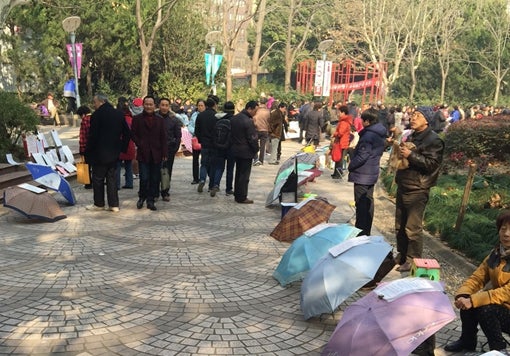