This blog is the second in a series of nine blogs on commodity market developments, elaborating on themes discussed in the April 2019 edition of the World bank’s Commodity Markets Outlook.

Since our last report, oil prices have had a rollercoaster ride, falling sharply in the last quarter of 2018 before surging almost 40 percent since the start of this year.  However, prices are expected to moderate from current levels and average $66/bbl in 2019, slightly weaker than last year, according to our latest Commodity Markets Outlook. The forecast assumes continued rapid growth in U.S. oil production and weaker growth in oil demand.

Crude oil prices have gyrated over the past 6 months, with the price of Brent crude oil peaking at $86/bbl in October, dropping to a low of $50/bbl in December, and recovering to $75/bbl in April.
The drop in prices was triggered by the United States’ decision to grant waivers to its sanctions on Iran to eight countries, and coincided with a sharp increase in production among OPEC countries, particularly Saudi Arabia, as well as surging U.S. production. 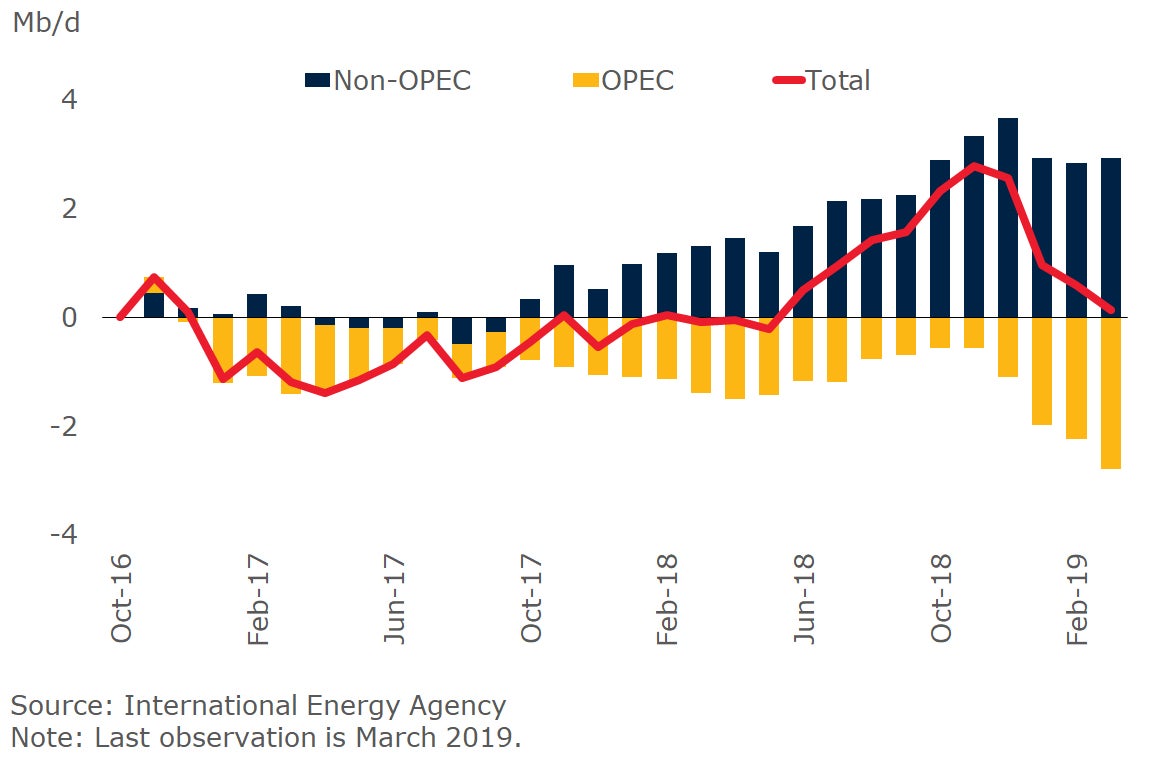 In response to the fall in prices last year, OPEC and its partners agreed to reduce output by 1.2 million barrels per day (mb/d), starting in 2019. Production among OPEC countries has since fallen substantially more than that, driven by Saudi Arabia, where output has dropped by around 1 mb/d since November. The drop in output also reflects lower production in Iran and Venezuela, which did not participate in the planned cuts.

Production plummets in Iran, Venezuela on sanctions and economic turmoil

The impact of U.S. sanctions on Iranian production, despite the existing waivers, has been substantial. Output is down almost 30 percent relative to its peak in the second quarter of 2018, comparable to the impact of earlier sanctions in 2014. Venezuelan production has fallen by a third since September, to just 0.9 mb/d in March 2019, as a result of the worsening political and economic situation and new U.S. sanctions—U.S. imports of Venezuelan oil fell from an average of 0.5 mb/d in 2018 to zero in February. 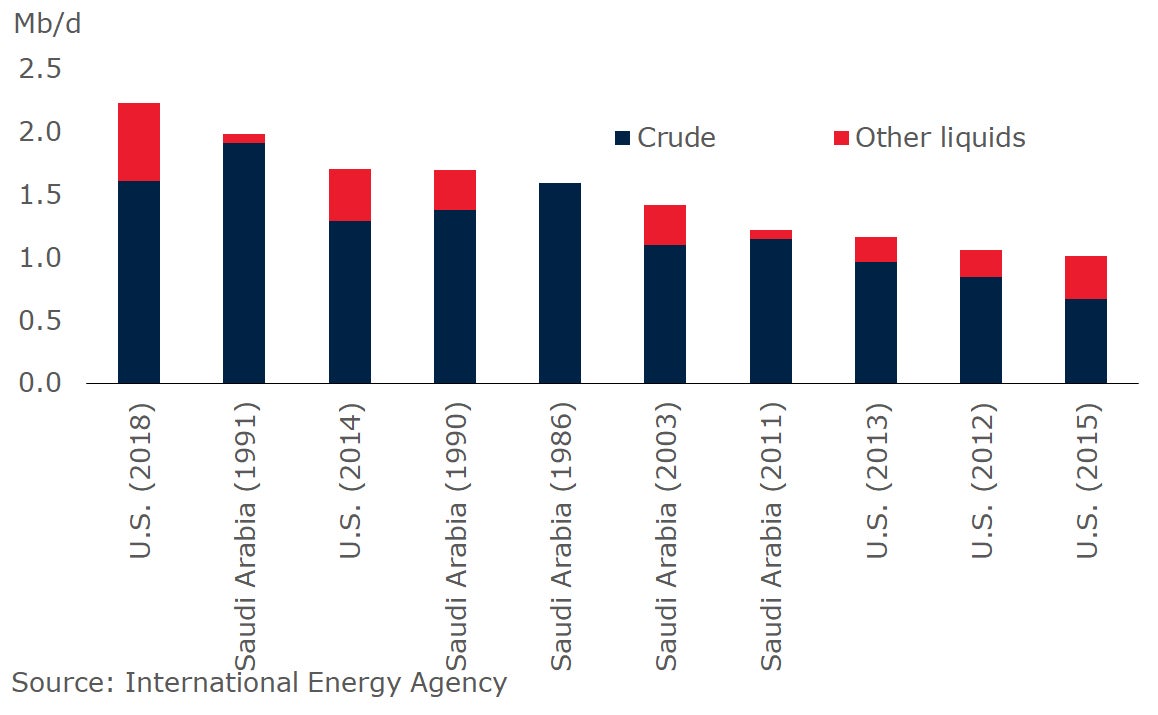 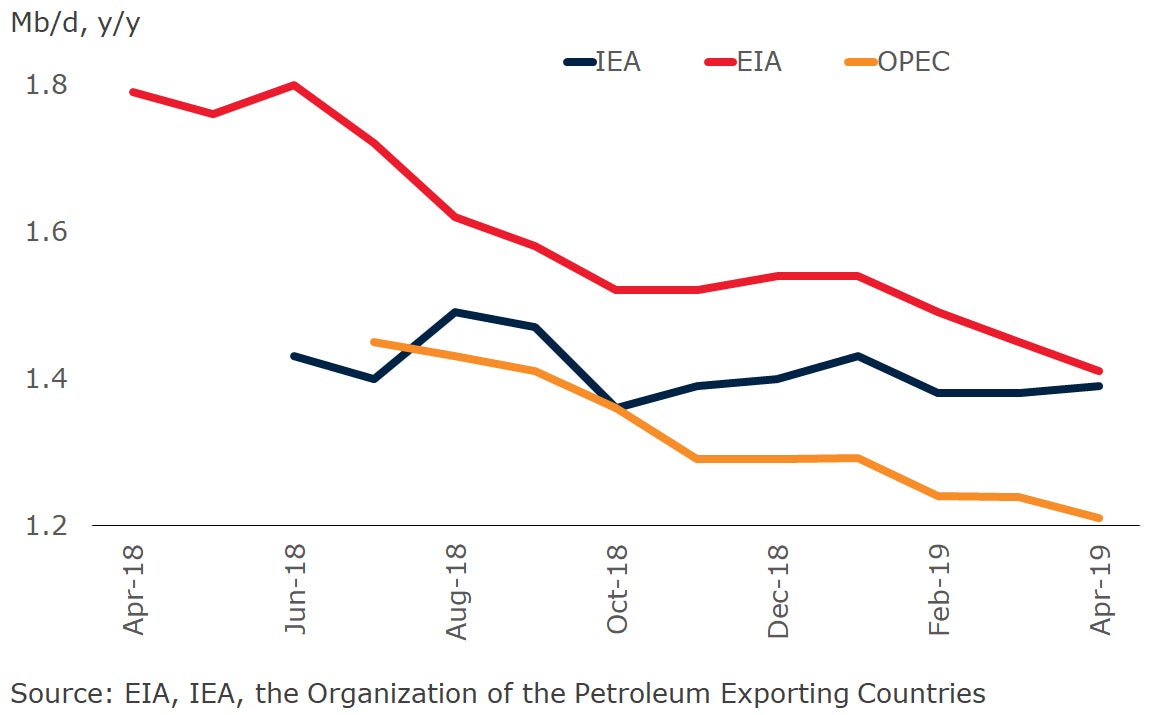 Oil prices are expected to moderate from current levels and average $66/bbl in 2019 (an average of Brent, WTI, and Dubai), a slight fall from its 2018 average. The forecast assumes U.S. production continues to rise rapidly, albeit at a slower pace than last year, while growth in oil consumption is expected to be weaker than last year, reflecting lower-than-expected global growth this year.

Risks to the outlook relate primarily to policy outcomes.

The United States’ decision on April 22 to terminate waivers to its sanctions on Iran led to a rise in oil prices amid fears of a supply shortfall; Iran currently exports around 1.1 mb/d of crude oil. However, the impact of this decision remains uncertain, for two reasons. First, it is not clear how quickly countries will comply with the removal of waivers. Second, some countries could choose to ignore the sanctions.
In the event of a price spike, it probable that OPEC will increase production. OPEC currently has around 3.5 mb/d of spare capacity, with Saudi Arabia accounting for approximately one-half of this. But it is unclear how rapidly these countries will respond to a reduction in Iranian exports. OPEC is due to meet on June 25th to discuss the future of the production cuts.