This blog is a biweekly feature highlighting recent working papers from around the World Bank Group that were published in the World Bank’s Policy Research Working Paper Series. This entry introduces four papers published from October 1 to October 15 on various topics, including gender, industrial trends. COVID-19 and air transport markets .

The first paper we introduce in this roundup takes us to India. Edutainment is the use of entertainment media to increase audiences’ knowledge about an educational issue, create favorable attitudes, shift social norms, and change overt behavior. In Using Social Media to Change Gender Norms : An Experiment within Facebook Messenger in India, Victor Orozco-Olvera and coauthors test the effectiveness of edutainment at reshaping gender norms and reducing social acceptability of violence against women (VAW). Participants were randomly assigned to watch video clips with implicit or explicit messaging formats. Findings show that both edutainment formats worked, with effects varying for different outcomes. Objective viewership data shows that take-up rates for the humorous drama were twice as high compared to the more information-focused docuseries. On effectiveness, however, neither format dominated in the one-week follow up survey. While the drama was more effective at raising knowledge and reshaping attitudes related to gender norms and VAW the docuseries was more impactful in increasing willingness to share video clips with friends and promoting online information-seeking behaviors.

In the second paper we introduce, Central America’s Deindustrialization, Rishabh Sinha assembles and harmonizes sectoral data from several sources to study the industrial trends in six Central American economies in the last two decades. Findings show that the industrial employment share contracted by 2.5 percentage points on average over the past two decades. This deindustrialization was not trade driven, in which economies substitute domestic production of industrial goods via cheaper imports. Instead, an increase in barriers restricting the efficient flow of labor across sectors drives this decline.

In The Impact of COVID-19 on Global Inequality and Poverty, Daniel Gerszon Mahler and coauthors quantify the consequences of the pandemic on global inequality and poverty in 2020. This paper is a key background paper for the Poverty and Shared Prosperity 2022 Report that was launched just before the 2022 Annual Meetings. The paper uses various data sources available to get a global picture of the impact of the pandemic on inequality and poverty in 2020. The authors find that the world in 2020 witnessed the largest single-year increase in global inequality and poverty since 1990, when the study begins . When compared against a counterfactual without COVID-19, the authors find that the pandemic increased the global Gini index by 0.7 point and pushed an additional 90 million people into extreme poverty---measured as having a daily income or consumption less than $2.15 per capita. The uptick in global inequality is driven by increases in inequality between countries, reflecting that the shock to mean welfare was larger in poorer countries. Likewise, the uptick in extreme poverty was driven mostly by shocks to average incomes and not by changes to inequality within countries. 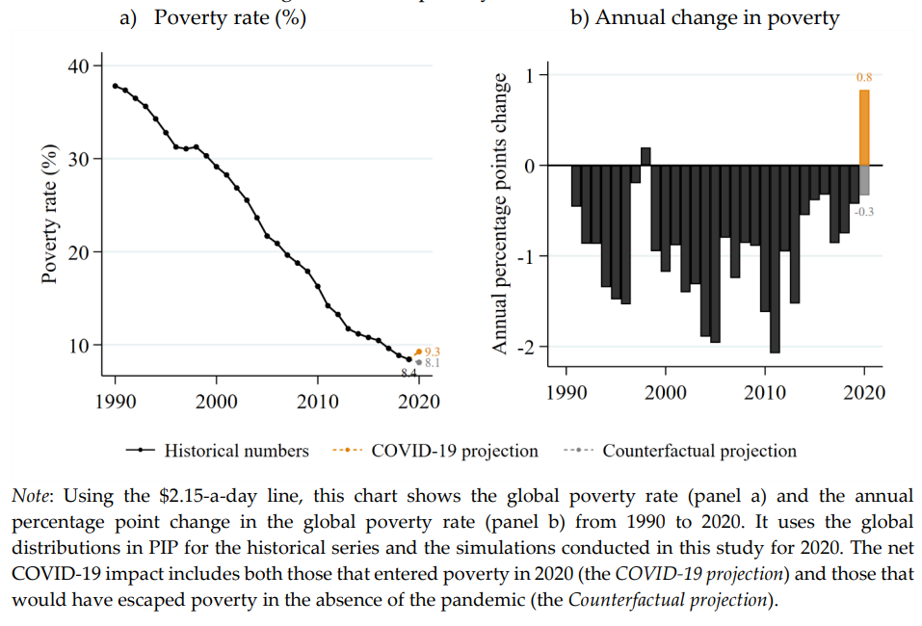 The following are other interesting papers published in the first half of October. Please make sure to read them as well.