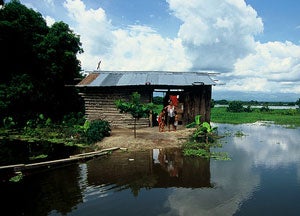 It is an alarming trend: extreme weather events and disasters recorded around the globe are increasing in frequency, and in the magnitude of overall economic losses they cause. The recent devastation left by Taiphoon Haiyan in the Philippines is a tragic reminder that many countries around the world continue to be highly vulnerable to natural hazards. While low- and high-income countries alike experience extreme natural events, it is particularly in lower income countries where such events result in economic and humanitarian disasters.

However, the statistics on casualties and economic losses reported in the media fail to give us the full picture of a much more complex, extensive, and prolonged tragedy — which is mainly experienced bythe poorest.

Long after the attention from media, public and even policy makers has faded, the poor people are the ones most likely to continue to feel the significant consequences of a disaster in terms of income and welfare. While wealthier households may be able to rely on their resources to recover from disaster damages, poor people are often left with next to nothing: Following the 2005 flooding in Mumbai slum dwellers experienced average economic losses, which were equal to their average savings. Similarly, the 1999/2000 droughts in Ethiopia caused low-income households to lose up to 80% of their assets, whereas wealthy households lost just 6%.

Such direct economic losses are associated with further indirect human capital losses: research has shown that in the aftermath of a disaster, poor people are particularly at risk of undernourishment and other health problems. For children this often entails stunted growth, impairing their school performances, future physical constitution, and long-term productive capabilities. Moreover, disaster-related income shocks often force poor households to reduce non-essential investments, for instance in their children’s education, in order to afford the basic minimum of essential consumption (such as food and shelter).  In addition, this is often accompanied by increasing instances of child labour. These effects of disasters on health and education are likely to impair the economic and human development prospects of the poor in the very long term.

Evidently, the long term welfare levels attainable by poor households depend not only on the severity, but also the frequency of disasters. The role of more frequent, even though possibly smaller natural crises becomes particularly relevant considering climate change impacts. More frequent, smaller events are likely to remain unrecorded, and will thus not draw adequate policy responses. Different to large natural catastrophes, which typically affect entire regions and large parts of the population, smaller events are likely to mainly affect the most vulnerable and poor population — for them however the frequency of small disasters could prove to be devastating:

If households cannot recover their pre-disaster level of consumption before the next disaster occurs, they may find themselves in the vicious cycle of a poverty trap: lacking coping capacity, more severe consequences, longer recovery periods, and persistently reduced income and resilience reinforce a downward spiral perpetuating poverty. Especially the poorest households, who are already surviving on incomes close to or below the poverty line, are typically forced to sell off productive assets (such as livestock, land, or productive machinery), in order to subsist during transitory shocks. This compromises their ability to recover and generate income in future, and puts them at risk of being locked into poverty in the long-term. Deteriorating health and education reinforces this effect and can perpetuate poverty traps as a long-term impact of a disaster, even across generations. Overall, direct disaster losses at the household level can have further serious consequences for social stability, migration, macro-economic outcomes, poverty and development.

To break this vicious cycle, policy makers must strengthen the resilience of the poorest and most vulnerable population; particularly by improving or providing  risk management and coping systems, including  cost-effective early warning systems, flexible social safety nets, and cash transfer schemes, which can mitigate damages and limit them to the short term. While policy action in the past has predominantly focused on the provision of post-disaster relief and recovery, action must also be taken ex-ante to build the resilience of the poor. It is very important now a days for poor and developing country specially people are living in coastal areas and zone-V areas. Govt should play a very important role to ensure equal and equitable distribution of resources and special risk mitigation funding for the most vulnerable communities. Also important to monitor the proper implementation of approved activities. Days also come Govt. should involve vulnerable communities in planning process. Respect their knowledge and coping mechanism. Building Resilience only possible when all support system functional and work properly.