Risks and Opportunities of Participation in Global Value Chains

Since the first industrial revolution, waves of technological improvement have changed the boundary of production and redefined the role of the state. The information and communication technology revolution has not only increased productivity, but has also reinterpreted the function of time and distance—billions of activities are now linked with “one-click,” and new transactions become possible with “just-in-time” delivery. If the technological revolution has made participation in Global Value Chains (GVCs) somewhat inevitable, it has also accentuated both the risks and opportunities associated with this involvement. On the one hand, participation in GVCs creates new opportunities for profits and expands the market horizon; but on the other hand, it exposes the enterprise sector to risks previously shielded by market boundaries and geographic distances, while increasing the scale of information asymmetry.

In the global arena, enterprise sectors in national economies are part of the supply base in GVCs for lead firms. Multinational companies as GVC lead firms can be advantageous or detrimental to national enterprise sectors and affect firms differently according to their size and industries. Typically, opportunities include supplying to much larger global demand, which eliminates the scale and purchasing power limitations of the domestic market in developing economies. There are, however, risks that originate from the less forgiving international standards for price, quality, standards and delivery schedules.

Scaled-up economies favor the concentration of production, which tends to minimize costs, leading to higher profits for enterprises and possibly lower prices for consumers. The higher concentration of production yields benefits in terms of large-scale clustering and agglomeration, but it generates new risks for the economy. GVCs are becoming geographically more consolidated, due to the rise of larger emerging economies after 1989. In addition, supply chain “rationalization” shrunk the total number of suppliers in GVCs as consumption declined in most advanced industrial countries after the 2008-09 global economic recession.

These new patterns in the global economy affect the distribution of risk and vulnerability in national enterprise sectors. Economic and social upgrading (or downgrading) of firms and workers can take place in multiple trajectories. Social upgrading refers to improvements within a specific enterprise (or associated group of enterprises) in the terms of employment, remuneration, worker rights, and workplace safety and employee insurance arrangements. Common trajectories of social upgrading include situations where risks for workers are reduced as small-scale household work gets turned over into high-tech and knowledge-intensive work. Other scenarios for social upgrading include adequate certification of the overall standard observed in labor-intensive industries, thereby lowering risks to workers (See Figure). 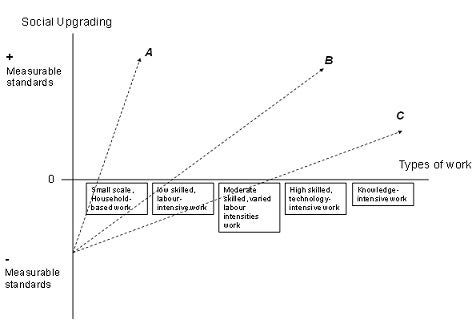 The expansion of global production, especially in labor-intensive industries, has been an important source of employment generation. However, economic upgrading does not always lead to social upgrading in the form of better wage and working conditions. Rossi’s case study of garment factories in Morocco led by fast fashion buyers shows that functional upgrading in GVCs can bring about social upgrading and downgrading simultaneously. In both developed and developing countries, the economic gains of participating in GVCs do not necessarily translate into good jobs or stable employment; in the worst case, economic upgrading typified by a number of successful export economies, especially in low-income countries, may be linked to a significant deterioration of labor conditions and other forms of social downgrading.

The government can provide a critical supportive environment by improving infrastructure to help exporters, local communities and small producers access national and international markets. Firms benefit most from participation in GVCs if they are relatively large, technologically advanced, professionally managed, and have diversified export markets (both in terms of products and countries). Workers benefit most from participation in GVCs if their working conditions are relatively formalized (e.g., wages, length of work day and work week, defined benefits) and if they have higher skills (closely correlated with more advanced education) that allows them to carry out better remunerated tasks. Professor of Sociology and Director of the Center on Globalization, Governance & Competitiveness, Duke University