What comes first, the chicken or the norm? Gender segregation in an agribusiness program in Nigeria

Occupational choice is one of the most important economic decisions an individual can make and has been shown to be a key driver of the productivity and earnings gap between men and women. Women tend to sort into different occupations than men, and occupations dominated by women often pay less on average. For example, in entrepreneurship, there is a higher concentration of women in sectors such as retail or food services; in farming, there is a lower likelihood that women will be included in cash crop markets. Social norms may restrict women’s choices about which types of work to pursue, and in a new paper we explore the extent to which what is deemed appropriate work for women explains an influx into the poultry value chain observed in an agribusiness development program.

The new paper “Occupational Sex Segregation in Agriculture: Evidence on Gender Norms and Socio-Emotional Skills in Nigeria” examines gender differences in the labor participation in agribusiness value chains in Nigeria. Using data from approximately 12,000 applicants to a Government of Nigeria (GoN) development program that seeks to create opportunities in agribusiness, we analyze the choice of agribusiness value chains among male and female program applicants. We find that when given a choice of 11 different value chains, the majority (54 percent) of applicants chose to enter into the  poultry value chain, which we find to be one of the least profitable among the choices. In addition, women were significantly more likely to choose poultry than men (a gender gap of 7.2 percentage points in the northern states and 3.6 percentage points in the southern states).

The GoN program was designed to encourage men and women to start agribusinesses within the government’s priority value chains by providing technical and business training plus an in-kind grant of business inputs. During the application process for the program, each applicant was required to select a sector from any of the 11 prioritized value chains: cassava, rice, cashew, poultry, aquaculture, cocoa, maize, tomatoes, ginger, dairy or wheat. These value chains were proposed by the project based on economic viability and the national objectives of food security, export potential and livelihood promotion.

Poultry may be an attractive enterprise, especially among women and youth, since it does not require a lot of land, can generate returns quickly (it has short production cycles), and provides full employment as opposed to being dependent on seasonal production. However, the popular choice of the poultry value chain among applicants may not have been based on a clear assessment of market opportunities and earnings potential. In the paper we ask, when offered a choice of 11 value chains to pick from, what factors made over 50% of the applicants select into poultry? And why were women more likely to make this choice than men?

Among women, we find that being older, having more work experience, and owning land are positively correlated with the probability of choosing a higher-return non-poultry sector. In the northern states, norm perception plays an important role in explaining women’s sorting into poultry. In the north, gender norms are more restrictive and embedded in traditional gender roles and behaviors, and we find that the more women perceive that their community judges women badly for working outside the home, the less likely they are to enter and operate in the higher-return non-poultry sectors. Norms do not appear to play a part in the sectoral choice decision in the south where norms around gender roles are more egalitarian. However, tertiary education is positively correlated with the choice to enter non-poultry sectors for women in the south. Socio-emotional skills such as personal initiative, perseverance and creativity are positively correlated with crossing over to non-poultry sectors for women with no prior experience, reflecting that these skills are likely required for women’s decision to enter into these higher-return sectors. Men’s choice of non-poultry sectors is simply driven by men having more years of work experience in their chosen value chain.

Figure: Individual Beliefs versus Perceived Community Norms on a Women’s Right to Work Outside the Home among Women and Men in the North and South of Nigeria 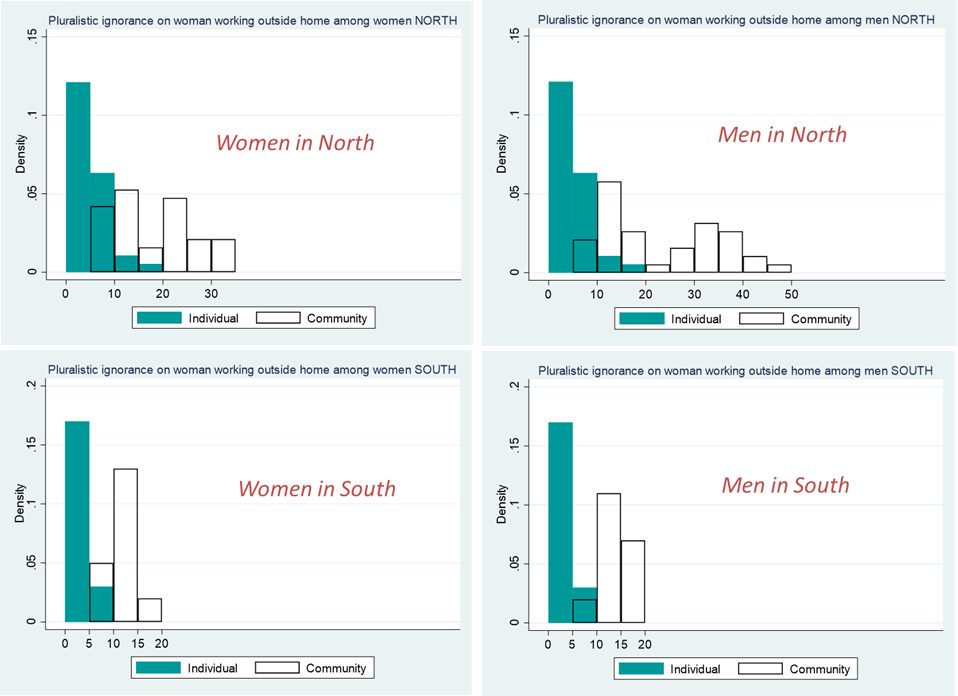 Note: Green bars suggests that only a small proportion of the sample personally believe that women should NOT work outside of the home (aggregated by local government area (LGA)). White bars represent the community norm, given by the proportion of the community expected to judge a woman badly for working outside the home, with more judgement perceived in the Northern states than in the Southern states.

It is important to note that in non-traditional sectors where women are not highly represented they may be marginalized or face social discrimination. In the analysis, we find that women in the northern states with more experience in the higher-return non-poultry sectors exhibit lower self-efficacy, which we hypothesize could reflect the challenges and backlash they face when deviating norms to cross over and operate in non-traditional sectors.

The extent to which restrictive gender norms influence gender-based occupational segregation could affect women’s potential to profit from agribusiness and further exacerbate the gender earnings gap.